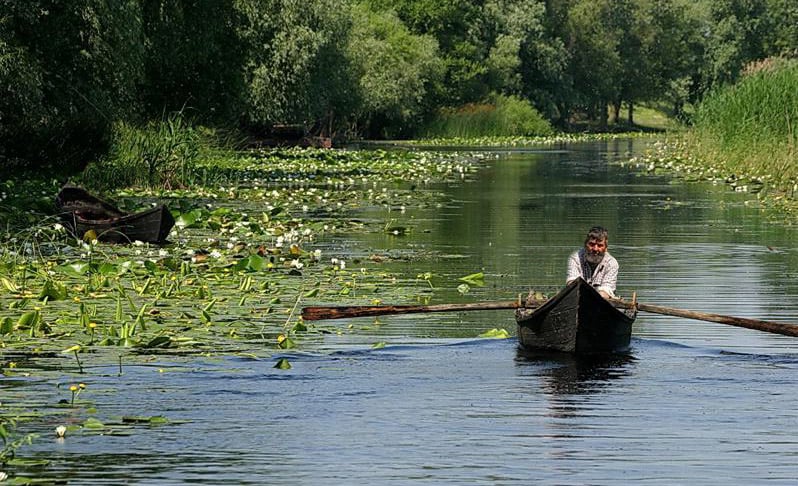 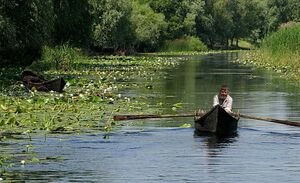 Romania ( (listen) roh-MAY-nee-ə; Romanian: România [romɨˈni.a] (listen)) is a country located at the crossroads of Central, Eastern, and Southeast Europe. It borders Bulgaria to the south, Ukraine to the north, Hungary to the west, Serbia to the southwest, Moldova to the east, and the Black Sea to the southeast. It has a predominantly temperate-continental climate, and an area of 238,397 km2 (92,046 sq mi), with a population of around 19 million. Romania is the twelfth-largest country in Europe and the sixth-most populous member state of the European Union. Its capital and largest city is Bucharest, followed by Iași, Cluj-Napoca, Timișoara, Constanța, Craiova, Brașov, and Galați.

The Danube, Europe's second-longest river, rises in Germany's Black Forest and flows in a southeasterly direction for 2,857 km (1,775 mi), before emptying into Romania's Danube Delta. The Carpathian Mountains, which cross Romania from the north to the southwest, include Moldoveanu Peak, at an altitude of 2,544 m (8,346 ft).

The 580,000 hectare Danube Delta is home to massive amounts of water birds of all kinds, most notably pelicans of two species, herons, storks, cormorants and terns. It is a favourite staging area for passage migrants and also wintering grounds for masses of migrating water birds from the steppes, the boreal forests and the tundras further north. The region has some of Europe's very few remaining grazed mosaique forest landscapes, kept in their natural state by the wild horses and wild cattle still present. Working with partners, the Rewilding Danube Delta team is working to significantly improve the ecological integrity and natural functioning of 40,000 hectares of wetland and terrestrial delta habitat, using rewilding principles on a landscape scale. Revitalised and self-governing natural processes, particularly flooding and natural grazing, will govern landscape formation, driving other natural processes, wildlife comeback, increased biodiversity and the development of a nature-based economy. The Danube Delta rewilding area is part of the Tauros breeding programme, managed by the Taurus Foundation and Rewilding Europe. The aim of the programme is to breed a cattle breed that resembles the aurochs by establishing viable free-ranging populations of cattle in several European locations. Due to translocations in 2016 and 2017, the number of Tauros cattle grazing near Sfântu Gheorghe, Tulcea is now 18 animals. Rewilding Europe works to create new opportunities for delta communities by supporting the development of nature-based business. 2019 saw the release of a water buffalo herd as a proxy for Bubalus murrensis; and 2020, of a Turkmenian kulan herd (a species present in European Russia until the 18th or 19th century, and close relative of the Western European wild ass that became extinct in the Chalcolithic).

The work of Rewilding Europe and its partners is focused on bringing back the European bison. Since 2013, Rewilding Europe and WWF Romania have been working together in the Southern Carpathians rewilding area to reintroduce this iconic species. The major objective of this ongoing project is to create a demographically and genetically viable population in the Southern Carpathians, comprising free-roaming sub-populations in the Țarcu Mountains and nearby Poiana Ruscă Mountains.

So far, following bison releases in 2014 and 2015, in June 2016, a third bison release took place as part of the European Commission-funded LIFE Bison project, with a fourth release of nine animals taking place in April 2017. Rewilding Europe and WWF Romania have been working together to create one of the largest contiguous wild areas in Europe.

Back from the brink: Bison return to Romania after 200-year absence, Dec 1[1]

Rosia Montana: how Romanians united to save a mountain village from mining apocalypse, Jan 11[2]

European bison to roam the forests of Romania after 200 years, May 21[6]

The PRAIS Foundation, an organization in Romania, in partnership with the Romanian Ministry of Environment and the National Environmental Guard and other partners, have confirmed that they have planted over eleven million trees through the national tree planting movement 'Millions of People, Millions of Trees'.

Page data
Retrieved from "https://www.appropedia.org/w/index.php?title=Romania_community_action&oldid=668814"
Cookies help us deliver our services. By using our services, you agree to our use of cookies.
Categories:
About Appropedia · Policies · Contact · Content is available under CC-BY-SA-4.0 unless otherwise noted.