From Appropedia
Redirected from Polymer Calendering

Fig 1: Roller setup in a typical 'I' type calender

A calender is a device used to process a polymer melt into a sheet or film. It has been in use for over a hundred years and when first developed it was mainly used for processing rubber, but nowadays is commonly used for producing thermoplasticW sheets, coatings and films.[1] The calender never did become very popular when it was first invented mainly because it was difficult to adjust the desired gap between rollers; consequently, it was difficult to get an accurate sheet thickness. The process did not start to become popular until the 1930's when the machines became easier to adjust.[2] Nowadays calenders can achieve tolerances around [math]\displaystyle{ \pm }[/math]0.005mm[2].

The calender concept is fairly easy to understand. The basic idea of the machine is that squishes a heat softened polymer between two or more rollers (this area is called a nip) to form a continuous sheet. To begin the process the polymer must go through blending and fluxing before it goes through the calender. Blending is a process that creates the desired polymer and fluxing heats and works this blended polymer to make it a consistency easier for the calender to handle..[3] The polymer is then ready to go through the calender and will leave it at a thickness dependent mainly on the gap between the last two rollers. The last set of rollers also dictate the surface finish; for example, they can influence the glossiness and texture of the surface[1]. One thing about polymers being calendered is that the sheet going through the rollers tends to follow the faster moving roller of the two that it's in contact with and it also sticks more to the hotter rolls. That is why calenders typically end with a smaller roller at a higher speed to peel the sheet off. It is also why the middle roller is normally kept cooler so that the sheet won't stick to the other rollers nor will it split by sticking to both rollers which can happen.[4] This splitting phenomenon has forced calender operators to desire a high friction ratio between two rollers, which ranges from 5/1 to 20/1[4].

The best polymers for calendering are thermoplastics. One reason for this is because they soften at a temperatures much lower than their melting temperature, giving a wide range of working temperatures. They also adhere well to the rollers, allowing them to continue through the chain well, but they don't adhere too well and get stuck on the roller. The last reason is that thermoplastic melts have a fairly low viscosity, but they are still strong enough to hold together and not run all over the place. Heat sensitive materials are also great for calenders because calenders put immense pressures on the materials to work them and therefore do not need as high of temperatures to process them limiting the chances of thermal degradation. This is why calendering is often the method of choice for processing PVC[2]. Due to the nature of the process the polymers must have a shear and thermal history that is consistent across the width of the sheet[5].

The best quality sheets of plastic today are produced by calenders; in fact, the only process that competes with the calender in sheet forming is extrudingW. The calender also is very good at handling polymers that are heat sensitive as it causes very little thermal degradationW. Another advantage to calendering is that it is good at mixing polymers that contain high amounts of solid additives that don't get blended or fluxed in very well. This is true because compared to extrusion the calender produces a large rate of melt for the amount of mechanical energy that is put in.[6] Due to this companies are able to add more filler product to their plastics and save money on raw materials. Calenders are very versatile machines meaning that it is very easy to change settings like the size of the roller gap.

Although the calendering process produces a better product than the extruding process there are a couple of disadvantages. One disadvantage is that the process is more expensive to perform which is a major deterrent for many companies. The calendering process also is not as good at too high of gauges or too low of gauges. If the thickness is below 0.006 inches then there is a tendency for pinholes and voids to appear in the sheets[4]. If the thickness is greater than about 0.06 inches though there is a risk of air entrapment in the sheet.[7] Any desired thickness within that range though would turn out much better using a calender process.

There are 3 main types of calender: the I type, L type and Z type 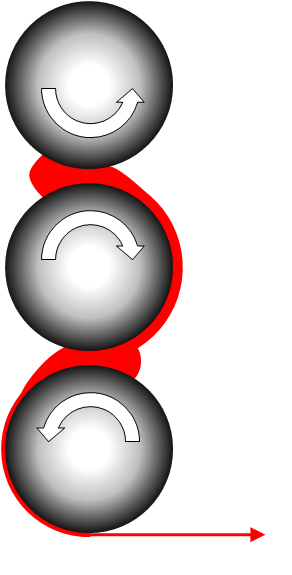 Fig 1: Roller setup in a typical 'I' type calender

The I type, as seen in Figure 1, was for many years the standard calender used. It can also be built with one more roller in the stack. This design was not ideal though because at each nip there is an outward force that pushes the rollers away from the nip. 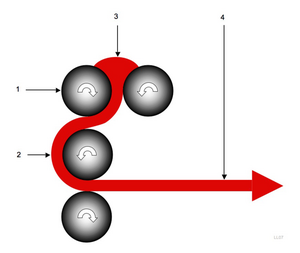 The L type is the same as seen in Figure 2 but mirrored vertically. Both these setups have become popular and because some rollers are at 90o to others their roll separating forces have less effect on subsequent rollers. L type calenders are often used for processing rigid vinyls and inverted L type calenders are normally used for flexible vinyls.[8] 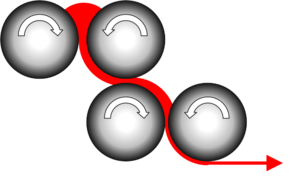 The z type calender places each pair of rollers at right angles to the next pair in the chain. This means that the roll separating forces that are on each roller individually will not effect any other rollers.[5] Another feature of the Z type calender is that is that they lose less heat in the sheet because as can be seen in Figure 3 the sheet travels only a quarter of the roller circumference to get between rollers.[9] Most other types this is about half the circumference of the roller. 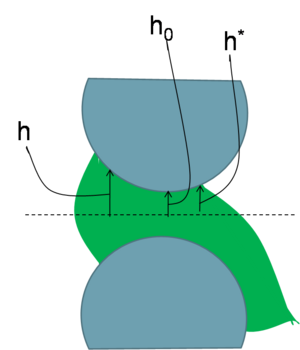 Using a newtonian analysis the process can be modelled. Assumptions that had to be made to develop these equations are:[5]

The velocity of the fluid/melt against the rollers:[5]

The velocity can also be found anywhere in between the rollers using the next equation:[5]

From the equation it is apparent that the velocity in the flow approaches the velocity of the rollers as it gets closer to them. It also shows that in the middle of the two rollers the velocity will be going the slowest. Only with a high viscosity and a low pressure gradient could the melt velocity approach the roller velocity.

The volumetric flow can be modelled by:[5]

This equation directly shows how quickly the product will be produced.

The maximumum pressure can be found with:[5]

The maximum pressure is therefore dercreased by decreasing velocity, viscosity or the roller radius or by increasing the roller gap.

This next equation is for the force, caused by the fluid, that acts to separate the two rollers:[5]

It is critical that this roll separation force be as low as possible. From the equation it can be seen that to do this the viscosity, velocity, roller radius and the sheet width need to be decreased and the roller gap needs to be increased.

The total power input into both rollers:[6]

The two functions in the equations 5 and 7 are:[6]

The temperature of the fluid melt has been found to be highest at the rollers. This happens for two reasons:

The effects of this tend to grow in magnitude even more the more viscous the fluid is. If one were to raise the rolling temperature there would be changes in the above fluid mechanics. It would decrease the viscosity; consequently decreasing the power input, pressure and roll separating forces in the fluid. It would also lower the chances of a fracture in the fluid and make the surface finish better, but this all comes at the price and increases the chances of thermal degradation.[5]

The calender is able to produce the polymer sheeting at a fast rate. It can produce sheeting at a rate between 0.1 - 2.0 m s^-1[2]. Increasing the speed though has negative effects on the process, apart from the effects mentioned in the Fluid Mechanics section. By increasing the speed the heat has even less time to spread throughout the fluid from the rollers causing an even greater temperature variation. It also causes an increase in shear forces in the fluid at the rollers, which increases the chances of surface defects like fractures[5]. The speed clearly needs to be chosen very carefully in order to produce a quality product.

In calendering the rollers are under great pressures, which can reach up to 41MPa in the final nip. The pressures are highest in the middle of the width of the roller and due to this the rollers get deflected. This deflection causes the sheet being made to be thicker in its center than it is at its sides. There are three methods that have bee developed to compensate for this bending:

Efficiency is a ratio of input energy to output energy. The output is defined by mainly by equation 7 and input energy is known by power consumption. Therefore to increase efficiency one must lower the input energy or increase the output energy. Many things factor to input energy that don't contribute to the output at all. Prior to making any product it takes one to two hours to start up a calender to working condition when it's when cold.[4] Due to this efficiency becomes a dependent on time and therefore efficiency only increases the longer the machine is producing and calenders can only be considered to have a good efficiency if they are run for a long time. Time can be lost in many ways including changing rolled up sheets and adjusting calender settings. If a system can be set up with two rollers to collect finished sheeting and the calender can be quickly switched to unload sheeting on the second one after the first one is full time can be saved there. For the second point this can be speeded up by having better automated controls for settings. If it has to be done by hand then the rollers have to be stopped and cooled down but nowadays most calenders can do this through controls that operate hydraulics. As mentioned earlier the calender produces large rates of melt for the amount of mechanical energy input. This means that the temperature of the rollers can be kept lower than the temperature than the temperature that would be needed to perform an extrude the sheet thus saving heat energy. To keep better control over the roller temperature and save time heating the rollers they are made with holes drilled axially in them. This allows the fluid, used to heat the rollers, to be heated more easily externally and then circulated through the rollers.