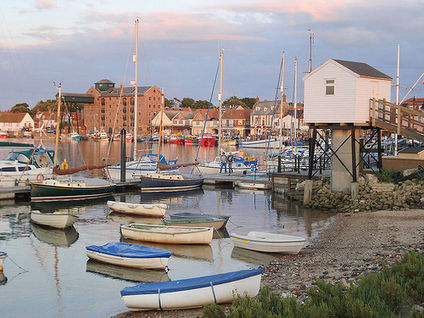 Please see our Local communities in Norfolk pages, where of course you can share any more information you may have about local sustainability initiatives.

Waterways: The Broads, a well known network of rivers and lakes, is located towards the county's east coast, extending south into Suffolk. The area has the status of a National Park and is protected by the Broads Authority. [1] - The Broads Society - Broads Authority

Norfolk now has one million solar panels - enough to power one fifth of all our homes, Jun 17 [4]

Norfolk's low-lying land and easily eroded cliffs, many of which are chalk and clay, make it vulnerable to the sea, the most recent major event being the North Sea flood of 1953. The low-lying section of coast between Kelling and Lowestoft Ness in Suffolk is currently managed by the Environment Agency to protect the Broads from sea flooding. Management policy for the North Norfolk coastline is described in the North Norfolk Shoreline Management Plan which was published in 2006 but has yet to be accepted by the local authorities. The Shoreline Management Plan states that the stretch of coast will be protected for at least another 50 years, but that in the face of sea level rise and post-glacial lowering of land levels in the South East, there is an urgent need for further research to inform future management decisions, including the possibility that the sea defences may have to be realigned to a more sustainable position. Natural England have contributed some research into the impacts on the environment of various realignment options. The draft report of their research was leaked to the press, who created great anxiety by reporting that Natural England plan to abandon a large section of the Norfolk Broads, villages and farmland to the sea to save the rest of the Norfolk coastline from the impact of climate change. [5]

In March 2006, Diss became the third town in the UK to join Cittaslow, an international organisation promoting the concept of 'Slow Towns' [6]