From Appropedia
Redirected from Suffolk 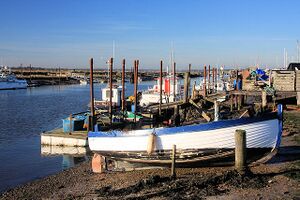 Suffolk () is a ceremonial county of England in East Anglia. It borders Norfolk to the north, Cambridgeshire to the west and Essex to the south; the North Sea lies to the east. The county town is Ipswich; other important towns include Lowestoft, Bury St Edmunds, Newmarket, and Felixstowe which has one of the largest container ports in Europe.

The county is low-lying but can be quite hilly, especially towards the west. It is also known for its extensive farming and has largely arable land with the wetlands of the Broads in the north. The Suffolk Coast & Heaths and Dedham Vale are both nationally designated Areas of Outstanding Natural Beauty.

Suffolk Wildlife Trust (SWT) describes itself as the county's "nature charity – the only organisation dedicated wholly to safeguarding Suffolk's wildlife and countryside." It is a registered charity, and its headquarters is at Brooke House in Ashbocking, near Ipswich. It was founded in 1961, and is one of 46 wildlife trusts covering the Great Britain and Northern Ireland. As of March 2017, it has 13,200 members, and it manages 3,120 hectares (7,700 acres) of land in 60 nature reserves, most of which are open to the public. It had an income of £3.9 million in the year to 31 March 2017.

The Trust believe that by building strong connections between local people, schools, businesses and nature, a lasting difference can be made to the environment and people's attitudes to nature. Planting and managing a community wild space brings local people together, and the recreational area they create generates a feeling of pride and ownership amongst the community.

The planting of Wild spaces by the community can generate lasting benefits including:

Forest for Our Children was the Trust's first Community-owned WildSpace project. It has been the inspiration behind their many other WildSpace sites around the UK and their environmental education programmes for schools. Based near the Trust's headquarters in Lawshall, Forest for Our Children is 9 hectares of land made up of 2 woods in the parish. Crooked Wood was planted in 1993 and Golden Wood between 1994 and 2010.

From Wikipedia:Green Light Trust § Forest for Our Children

Green Light Trust's Community-owned WildSpace Scheme was started in 2001 with a unique funding partnership from B&Q, Forestry Commission and Suffolk County Council. Over the last 10 years the Scheme has been a tremendous success. Working in partnership with local communities, Green Light has helped to establish nearly 60 rural and urban projects in 8 counties (including 2 business WildSpaces in Oxford and Cambridge.

Through the Trust's environmentally led approach, the Community-owned WildSpace Scheme has directly empowered at least 30,000 individuals in 58 communities to enhance, enjoy and value their local environment; and encouraged social responsibility by enabling individuals and organisations to get involved in social action on their doorsteps. Many uncommon and endangered species now colonise the woodlands and wild spaces that have been created.

The Broads, a well known network of rivers and lakes, is located towards Norfolk's east coast, extending south into Suffolk. The area has the status of a National Park and is protected by the Broads Authority.[1] - The Broads Society - Broads Authority

The River Stour Trust is a registered charity and waterway restoration group. It was founded in 1968 to protect and enhance the right of the public to navigate the River Stour, Suffolk, England. It is led by volunteers who are dedicated to its aims and objectives of restoring the navigation from Sudbury to the Sea (a distance of approximately 24.5 miles/37 km).

Since its formation, the Trust has restored Flatford and Dedham Locks, Flatford Barge Dock (in association with the National Trust), rescued an original River Stour lighter, and restored the Quay Basin, Gasworks Cut and 19th century Granary Building, which has become the headquarters for the Trust. In 1997, the Trust opened the new Millennium Lock at Great Cornard (creating through navigation from Sudbury to Great Henny) and in 2007, opened its new Visitor & Education Centre (adjacent to Cornard Lock) to offer facilities for visiting schools, other groups and the local community.

Since 2007, Griff Rhys Jones, the well-known actor, director, writer and producer, has been a Vice President of the River Stour Trust. He says, "I am a strong supporter of the River Stour Trust and everything to do with it. The riverway is so beautiful and unspoilt, especially with the wildlife and water-lilies and bullrushes, it is just terrific. It is a great example of why rivers should be open to people...I salute the River Stour Trust for opening the locks...it is supposed to be a river that traffic travels on.”

Suffolk coastal sites to be assessed for possible release of white-tailed eagles,[3] September 24

Page data
Retrieved from "https://www.appropedia.org/w/index.php?title=Suffolk_community_action&oldid=669963"
Cookies help us deliver our services. By using our services, you agree to our use of cookies.
Categories:
About Appropedia · Policies · Contact · Content is available under CC-BY-SA-4.0 unless otherwise noted.