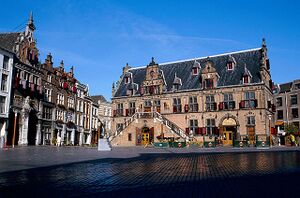 With 250 000 bicycles in Nijmegen, cycling accounts for 65 % of journeys to the city centre and Radbound University. The city boasts 60km of cycle superhighways, with another 20km underway[1]

To prevent flooding in the near future, the Dutch government is changing the course of more than 30 rivers throughout the country. These measures, taken along the rivers IJssel, Lek, Maas and Waal, are known as 'Room for the River'. Room for the river Waal as it passes Nijmegen is one of these measures. As part of this, the artificial island Veur-Lent was created in 2015. The river Waal not only has a sharp bend near Nijmegen, it also forms a bottleneck. In 1993 and 1995 this led to high water and floods. To prevent this from happening again and to protect inhabitants of the city and its surroundings against the water, work has been done to relocate the Waal dike in Lent and to excavate a large ancillary channel in the flood plains, creating an island in the Waal. The large scale project involves the construction of three bridges, new dikes and concrete water barriers. On the island, a project of alleged sustainable urbanism is giving birth to an urban river park with possibilities for recreation, culture, water and nature. W

Page data
Retrieved from "https://www.appropedia.org/w/index.php?title=Nijmegen_community_action&oldid=656444"
Cookies help us deliver our services. By using our services, you agree to our use of cookies.
Categories:
About Appropedia · Policies · Contact · Content is available under CC-BY-SA-4.0 unless otherwise noted.