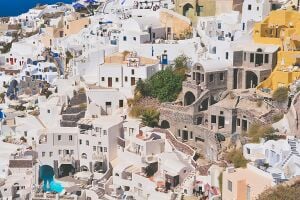 Greece (Greek: Ελλάδα, romanized: Elláda, [eˈlaða]), officially the Hellenic Republic, is a country in Southeast Europe. It is situated on the southern tip of the Balkans, and is located at the crossroads of Europe, Asia, and Africa. Greece shares land borders with Albania to the northwest, North Macedonia and Bulgaria to the north, and Turkey to the northeast. The Aegean Sea lies to the east of the mainland, the Ionian Sea to the west, and the Sea of Crete and the Mediterranean Sea to the south. Greece has the longest coastline on the Mediterranean Basin, featuring thousands of islands. The country consists of nine traditional geographic regions, and has a population of approximately 10.7 million. Athens is the nation's capital and largest city, followed by Thessaloniki.

From Wikipedia:Rapid transit in Greece

A "rapid transit", "underground", "subway", "elevated railway", "metro" or "metropolitan railway" system is an electric passenger railway in an urban area with a high capacity and frequency, and grade separation from other traffic. Rapid transit systems are typically located either in tunnels or on elevated rails above street level. Outside urban centers, rapid transit lines may run on grade separated ground level tracks.

In Greece there are several systems that are called "Rapid Transit":

Map of grassroots groups in Greece (2nd edition), Omikron Project, a group of girls and guys trying to show the untold side of Greece's current crisis, and fix the image problems that are damaging our country.

Greek Island Will Be Mediterranean’s First to Run on Renewable Energy, Sep 4 [2]

Tilos, Greece: the first island in the Med to run entirely on wind and solar power, Jun 15 [4]

The Greek Left Takes Stock of the Commons, Mar 1 [5]

Habibi.Works is a FabLab equipped with all the tools for people to unfold their potential and hone their abilities, Oct 31 [6]

Building Communities of Commons. A documentary on networks at Sarantaporo, Jul 9 [8]

"A commons colleague, John Restakis, wrote about this possibility a week or so before the January 25 elections. Now, speaking to the Greek Parliament last week, the new Deputy Prime Minister Gianni Dragasakis explicitly stated that Greece will develop new sorts of bottom-up, commons-based, peer production models for meeting people’s needs."

CommonsFest in Greece: A Movement Expands, May 13 [10]

Commons projects and activism seem to be really hopping in Greece: just last week a collaborative ebook, Πέρααπότοκράτοςκαιτηναγορά: Ηομότιμηπροοπτική, was published in Greece as a free, downloadable pdf file. The ebook presents a vision for a commons-oriented economy and society. Print copies will be available at the end of May, at a price defined by the reader.

The book cites five key reasons why this vision can succeed, particularly in Greece: 1) the extensive micro-ownership of land and other forms of capital; 2) the existing solidarity networks; 3) the rebirth of the cooperative movement; 4) the urgent need for rebuilding the economy; and 5) the decentralized networks of islands which offer a unique case study for the commoning of energy production and distribution.

Wildfires encroaching on Athens, citizens tracking developments via the web and Twitter, [12] August 24