Originally developed in collaboration between several staff at the city of Portland, USA's public transit agency TriMet and Google in 2005, and called the "Google Transit Feed Specification", the Google has since been replaced by General.

The format is now in relatively wide use around the world, although particularly in the USA. The importance of a de-facto standard for public transit information has been its ability to spur an ecosystem of app developers and projects, both proprietary and Open Source, to make use of the data. This makes public transit more accessible and amenable, which should support it being a more competitive option to the private car for transport.

There is also an emerging set of tools that use GTFS to allow analysis and communication of the quality of a public transport network, such as Mapnificent and OpenTripPlanner.

About the format[edit | edit source] 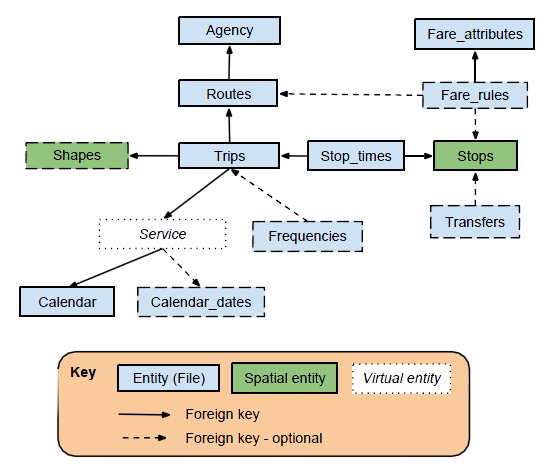 The GTFS is a relatively simple flat-file format, specifying agencies, routes, stops, and schedules for public transit in a region. For a quick visual overview of the format, see the figure at right, reproduced with permission from Martin Davis, per this post on his blog.

Availability of GTFS feeds around the world[edit | edit source]

Many cities in the developing world now have GTFS feeds available online - usually curated by the region's public transit agencies.

A website keeping track of the global database of such agencies and feeds is the GTFS data exchange.

Some cities don't yet have such feeds available. Sometimes they have the capability to do so, and it might require citizen advocacy in order to put in place the capabilities and processes to regularly release the data. See the papers by Aaron Antrim and collaborators below with some discussion and analysis of benefits of releasing GTFS data, and how to address potential concerns, that may be helpful in convincing agencies to change their approach.

However in other cases, particularly in the developing world where there is much more 'para-transit' that runs to a far less regular schedule - there are difficulties with representing the cities' transit in the GTFS specification. See the "possible extensions / alternatives to GTFS" section below.

Software tools for working with GTFS feeds, and converting to other formats, such as Geodatabases or GIS shapefiles[edit | edit source]

One reasonably nice Open Source Python-based library for working with GTFS feeds - either creating them, or extracting information from existing feeds - is Google's transitfeed library. It also includes tools for converting from the 'TransXChange' format to GTFS. Commercial GTFS tools such as AddTransit are also available.

There are tools to import the format into a relational database form such as [1], and also either using this route or the JEQL query language, to export the relevant route information to GIS shapefiles (see here).

GTFS has proved effective and useful for transit systems that follow well-defined routes and schedules in a region. But there are several aspects of possible improvements, additions, or alternatives to the standard that groups are working on:

For all of these possible extensions/alternatives, there is an important design issue to consider of simplicity of the standard versus flexibility.

Pages tagged in the GTFS category: