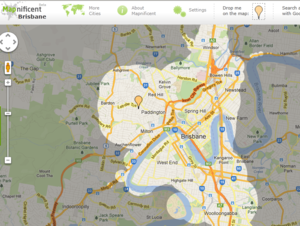 Fig 1: Sample Mapnificent Travel Time Map showing destinations estimated to be reachable in a given time (default of 30 minutes) by public transport from a starting point in Brisbane, Australia.

Mapnificent (http://mapnificent.net) was developed by Stefan Wehrmayer, and was “inspired by Mapumental”. Whilst not as computationally complex or accurate as Mapumental, it can parse GTFS data to show travel time maps to destinations in multiple cities around the globe, and is currently free to use.

The results are integrated and displayed with Google Maps.

The first version’s source code is available, whilst the developer claims later versions will be published soon.