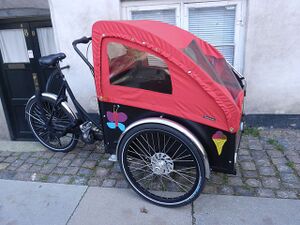 Freetown Christiania, also known as Christiania, is an intentional community and commune of about 850 to 1,000 residents, covering 7.7 hectares (19 acres) in the borough of Christianshavn in Copenhagen, Denmark. It was temporarily closed to visitors by residents by consensus in the plenum in April 2011 and a later occasion, but later re-opened.

Christiania has been a source of controversy since its creation in a squatted military area in 1971. Its cannabis trade was tolerated by authorities until 2004. Since then, relations between Christiania and Danish authorities have been strained. Since the beginning of the 2010s, the situation has been somewhat normalized and Danish law is now enforced in Christiania. W

Christiania has long pioneered a more ecological way of life, with a minimum of formal rules, and its DIY urbanism operates in accordance with three fundamental principles:

Christiania's citizens and businesses are divided into 14 self-governing districts, each imaginatively named, such as Dandelion, the Blue Caramel, and Psychedelic Action. Decision making is primarily organised through monthly meetings – a General Meeting, which includes all residents, and Area Meetings, which include those who live in a particular district. All decisions are made according to direct, consensus democracy, meaning they have to be agreed upon by everyone. While this can result in slow and cumbersome decision-making, it has also been a key factor in maintaining the community as a cohesive whole, in the face of its existential battles with the state.

Here we can already see a real difference between how 'economic democracy' is normally thought of – for instance, a worker's co-operative operating as an island of democracy in the market – and the 'deeper' form of economic democracy evident in Christiania. While capitalism treats people and ecology as mere 'externalities', offsetting all sorts of harms and inequities onto them, the businesses and initiatives developed by Christiania's residents are an integral element of the society from the very beginning. Moreover, residents have a direct say in what type of businesses get to operate in their local area, and the community collectively decides each year the sort of financial contribution those businesses will make to the running of the community.

Christiania is home to over 90 different initiatives: galleries, sports clubs, workshops, cafes and much more. Drawing on a long-standing culture of economic democracy in Denmark, these are generally run along collective lines, as co-operatives, or based on volunteer labour. Rather than the mini-dictatorship found in the modern capitalist workplace, decision making is shared and collective, according with Christiania's horizontal structures.

When people first occupied the military base in 1971, amidst a housing crisis in Copenhagen, living conditions were tough. While some buildings were luxury former-officer's quarters, many dwellings didn't even have doors or windows, let alone heating or sewerage facilities. The community got together to create a village from scratch, collaborating to renovate and construct the unique dwellings and shared infrastructure we see today. Owning or inheriting private property is shunned by Christianites, which prevents property speculation and landlordism, meaning that land and buildings are the domain of everyone and no one, simultaneously.

A series of collective workshops sprang up in the 70s and 80s, meeting the early need for stoves and other household furnishings, often out of recycled materials. The Green Hall – a former military riding house – acted as a central distribution point for recycled building materials salvaged from construction sites around Copenhagen. Workplace gender stereotypes were challenged with the formation of a Women's Smithy, an economic and creative space for women which, today, trains the next generation of Danish blacksmiths.

Christiania Bike: A group of friends, furthermore, established a bike shop, to cater for transport needs. This culture of hands-on creativity ultimately gave rise to the famed Christiania Bike: a three-wheeled box bike that enabled residents to move children and building materials around an 84-acre site on which cars have been banned. The bikes are a true success story, now exported all over the world, transporting Christiania's story everywhere they go.

Over the years, this collaborative economy enabled the creation of Christiania's own extensive sewerage infrastructure, a comprehensive refuse collection and recycling service, its own childcare facilities, maintenance of its own paths and roadways, and much more. Amongst the community's employees (building staff, childcare workers, administrators, rubbish collectors etc.), no worker is paid more than anyone else, avoiding the vast income inequalities, exploitation and hierarchies we see in so-called 'developed' societies.

To pay for all of this, a common fund was created. While in the 1970s this was ad hoc, with money stored in an old cigar box, it would evolve into the very comprehensive funding system evident today. Christiania's budget is debated and decided on collectively every year, through a transparent participatory budgeting process. Meanwhile, delegates of businesses meet with each other on a regular basis to discuss common issues or concerns and, rather than the 'beggar they neighbour' ethos typical under capitalism, businesses agree to pick up slack in financial commitments when one or the other runs into trouble. This collectivity adds to the richness and resilience of the whole.

In an early demonstration of ecological consciousness, a key element of Christiania's founding mission was to 'show that psychological and physical pollution can be prevented'. The community has been a pioneer on this, in many senses. The site is car-free, meaning that people get around by bike or on foot, whatever the weather. This mobility culture (echoed in Copenhagen more broadly) is the envy of many towns and cities, and bore the fruit of sustainable innovation in the form of the pioneering Christiania Bike. Streetlights are intentionally kept to a minimum, adding to the feeling of being a rural enclave in the heart of a city. This drastically reduces light pollution, and is all the better for the abundant wildlife which lives on the site.

This ecological principle is a constant work-in-progress, of course. Community energy systems, for instance, are gradually replacing the dirtier home-made stoves which originally provided space heating from coal and wood. These district heating systems are primarily run on wood pellets, but the community has also recently started harvesting geothermal heat from the lake they sit around for a number of dwellings. Christianites even administer their own trade-in scheme, where the replacement of less efficient ovens and stoves is subsidised, alongside a program of housing upgrades to reduce energy use.

As we approach the 50th anniversary of this extraordinary human endeavour, we should celebrate all that Christianites have achieved in the face of decades of opposition from the state. They have created a participatory economy, devoid of many of the flaws we see in socially and ecologically destructive capitalism. Their lack of property ownership tackles the speculative heart of capital, while practices of economic democracy run deep in everyday life. While the question of how such experiments can 'scale up' is often asked, that seems beside the point; more relevant is what can be learned from Christiania, in terms of an economy based on social equity and ecological balance, and how other communities can harness and practice these learnings in their own ecologies.[1]

Christiania has countered the government's plans for normalization with its own community driven planning proposal, which after eight months of internal workshops and meetings gained consensus at the common meeting before being published in early 2006. Christiania's own development plan was awarded the Initiative Award of the Society for the Beautification of Copenhagen in November 2006. The plan has received positive attention from the municipality of Copenhagen and the Agenda 21 Society for its sustainability goals and democratic process. W