This article describes the prototype of a compost heater silo, which is the heart of an internal Compost heater, in an early development state.

The prototype on the photograph on the right has been build by modifying a usual rainwater tank (polyethylen). It is 1.80 m high at a volume of 300 liters. This is too small for a substantial contribution for the heating requirements of a regular dwelling house, however its purpose is the analysis and optimization of the system's behavior, a feasibility study.

The prototype has an inlet for the biomass and an outlet for the resulting compost. There are 5 additional glass windows for observation and possible manual intervention. The air inlet and outlet are made from HT waste water pipes (polypropylen). Ports for water heating have been prepared, but are not yet used.

The prototype was started in October 2017 in a frost-free garage. After a one year trial the prototype was modified and moved into the basement of a dwelling house, where the conditions are nearly the same as in the intended use.

Biomass filled in: shredded bush, foliage, bio waste from the kittchen. Two buckets of half rotten compost were added to give the decay process a good start. This included many invertebrates who multiplied thereafter: 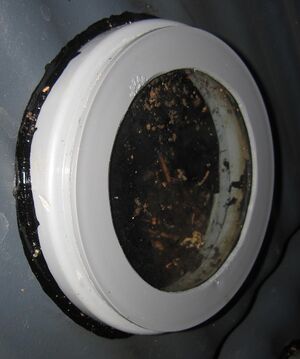 Details of the windows, view from the outside 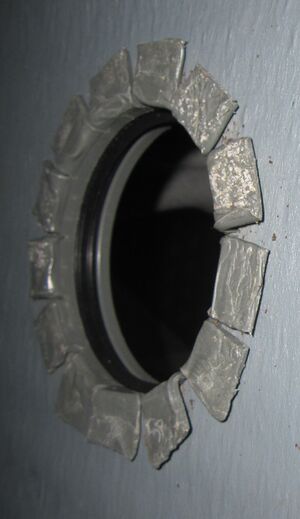 Details of the windows, view from the inside

The prototype was modified in July 2018 to make it ready for the second winter. All ports have been reinforced by a waste water coupler and carefully sealed. An additional pipe has been fed through the silo for water heating. The silo has been placed in a warmer location in a dwelling house, where the surrounding conditions are nearly the same as in the intended use. The air inlet has been corrected to the breather pipe of an existing waste water canal.

Experiences with the Silo inside the Dwelling House[edit | edit source]

Page data
Retrieved from "https://www.appropedia.org/w/index.php?title=Compost_heater_silo_(prototype)&oldid=622489"
Cookies help us deliver our services. By using our services, you agree to our use of cookies.
Categories:
Maintenance categories:
Comments
Privacy policy · About Appropedia · Disclaimers · Mobile view · Content is available under CC-BY-SA-4.0 unless otherwise noted.
</html