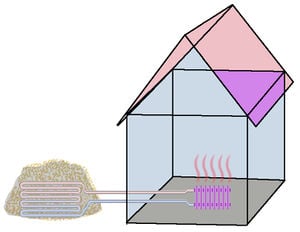 Using the heat of an external compost heap for warming up the inside of a house.

The compost heater (also biomeiler) it a setup for utilization of the heat dissipation of a composting process. The thermal effect is well known from a compost heap, where the biomass is decayed by the digestion and metabolism of many different microbes and invertebrates. The heat is used, for instance, for a dwelling house.

In contrast to the production of biogas, the composting process requires enough oxygen, resulting in an aerobic decay. Also, water is added at the beginning to optimize the biological conditions. When the decay has started, additional water is created by the decay process itself, so the compost remains wet indefinitely. Finally, the whole biomass breaks down completely to CO2 and H2O, producing heat. However, the composting process is usually stopped at the end of winter, and the created humus is removed from the heater and used for the garden.

The french agronomist Jean Pain is held responsible for the invention of the Biomeiler. His system was a combination of a sealed biogas reactor in the center of a big compost heap, producing both biogas and heat. He also worked on agricultural principles in harmony with nature.

Using the heat of an external compost heap for warming up the inside of a house.

The compost heap must contain at least 8000 liters biomass to be able of holding a temperature during the freezing winter, allowing the thermophilic microbes to continue their work. 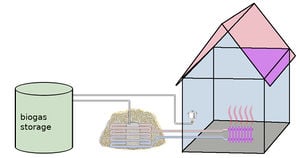 The heat of a compost heap is used, and biogas is produced at the same time.

The Jean Pain System is a specific type of a compost heater with a combination of aerobic decay of the heap with anaerobic decay in a sealed container in the center of the heap, thus producing both heat and biogas at the same time. Jean Pain Composting is a method to utilize the usable energy, emerging from a composting process, to warm up a building.

Jean Pain was a self taught Frenchman who is believed to have designed this system. He wanted to create a means of achieving (at least partial) energy autonomy, using inexpensive biomass fuel, with a mere mound.

The biomeiler has been invented by Jean Pain. While the idea of using the aerobic process for heating purpose is used in several locations, mostly on demonstration facilities, the combination with biogas, like the original setup of Jean Pain, has not spread much. 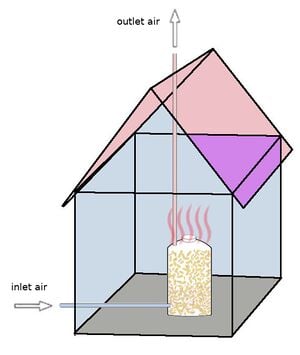 Compost silo inside a dwelling house.

The compost heater silo is the central part of an inhouse compost heater. The composting process is run in an airtight silo, placed in an appropriate part of the building. The produced heat can be distributed by a heating circuit, whereas a simple model of such a compost heater silo does not require a water circulation, radiating the heat directly to the interiors of the house. In autumn the silo is filled up with fresh biomass, after which the silo delivers comfortable heat all winter long.

A considerable amount of biomass (chipped wood, foliage, chopped bush) can be harvested in the garden. The annual energy of about 3860 kWh per 1000 m² is possible. The following data are from energy forestry.

** A stere is a simple stack of loose wood in a cubic meter. The actual wood content is about 65 percent, i.e. 1 stere is about 0.65 solid cubic metre of wood.

The unit stere can be used in this context directly to calculate the needed capacity of the compost heater, because the filled in biomass (for example chipped wood) contains a comparable fraction of air. 2100 kWh heat energy are, therefore, generated per m³ composting space. The residual moisture does not diminish the usable energy output and can be ignored in this case. It may vary without any impact. In contrast to a wood stove the residual moisture is not vaporized in a compost heater, so the energy conversion efficiency is not reduced.

While the heating of older dwelling houses require more than 20,000 kWh per year, the recently developed well insulated houses require less than 10000 kWh. For example, the House-in-a-House can be easily served by a compost heater silo of the size 2000 l, which generates 4200 kWh heat, making the interior of the house comfortably warm throughout the year. 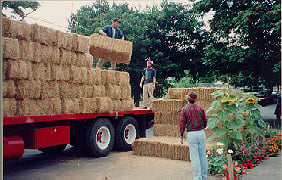