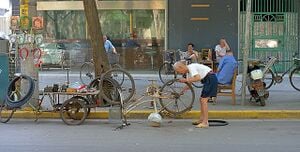 CASwiki news articles have a focus on news of community action for sustainability. This article is an offshoot from CASwiki's China community action article and is for news and comment in that context. Image: An old man is repairing a bi-cycle in the street. Nanjing, China.
Location data

The three-degree world: cities that will be drowned by global warming, Nov 3 [5]

The new "ecological civilization" will be born in China, according to the best environmental lawyer, Sep 23 [6]

Solar power lights up the path to prosperity, Jun 12 [9]

China's capital is replacing tens of thousands of taxis with electric cars to fight pollution, Feb 27 [10]

Beyond the city, Hong Kong is recreating its lost woodlands, Sep 26 [14]

How an environmental group is trying to clean up China's pollution problem, December 7 [21]

Beijing banned cars for 2 weeks and the sky turned perfectly blue. Guess what happened the next day? September 14 [23]

China to remove six million vehicles that do not meet exhaust emission standards to improve air quality, May 27 [29]

China to triple solar power capacity to fight pollution, May 20 [30]

Beijing to plant trees over an area 200 times the size of Central Park but will it cut pollution? March 16 [31]

A Push for Sustainable Agriculture in China from the Top Down and Bottom Up, February 1 [33]