This is the Operation and Maintenance (O&M) manual for CCAT mobile energy operations wagon (MEOW). Please refer to it and keep it up to date with any O&M changes.The MEOW was constructed originally in 2003 to showcase solar electric power at concerts and other public gatherings. At these events the bikes are removed from the interior of the trailer and can generate electrical output when used. This power charges the same battery bank associated with the PV system and in turn the system together can power different loads at the event such as the sound system.

The MEOW was constructed originally in 2003 to showcase solar electric power at concerts and other public gatherings. At these events the bikes are removed from the interior of the trailer and can generate electrical output when pedaled. This power charges the same battery bank associated with the PV system and in turn the system together can power different loads at the event such as the sound system. 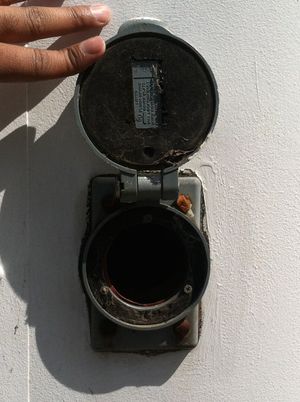 The MEOW is compatible for use with any vehicle with a ball hitch and brake light connection system.

There are four 12V bikes currently installed with the CCAT trailer. These bikes can be connected in series or in parallel electrically to increase voltage or current respectively. 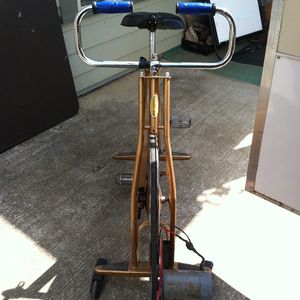 One of the four bikes

The MEOW has a 920 W PV system having four panels of 230 W each. The solar panels are connected to four 12 V, 102 aH (C-20) GEL cell batteries (Trojan Battery Company) in series producing 48 V to turn on a Outback GVFX48 inverter that can operate in both off-grid and on-grid applications. The system also has a charge controller that has 150 V limit. Necessary breakers to protect each component from overload current (between the PV panels and charge controller, between the charge controller and batteries, and between the batteries and inverter) have installed.

The maintenance instructions for the trailer and PV system are shown here.

In order to keep in compliance with state law, the trailer should have its plate renewed every five years. The plate can be renewed at the following link: http://www.dmv.ca.gov/online/vrir/vr_top2.htm (Harper, 2010). 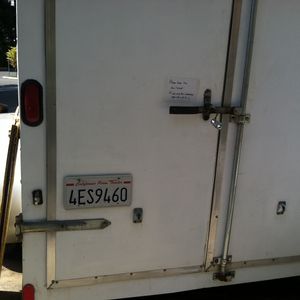 To keep the tires in good repair it is important the the tires pressure, tread, lugs, and bearings are all maintained. The following sections describe the maintenance required. 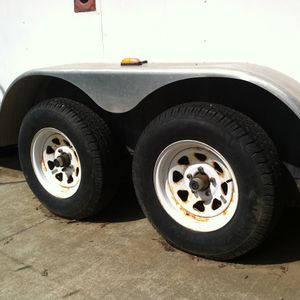 Tires on left side of MEOW

The pressure of the tires should be checked every 6 months and this pressure should be maintained at 30-60 psi. Keeping the pressure at the right level provides better fuel economy as well as maintaining the integrity of the tires (Harper, 2010).

The tires should be rotated every two years by moving the back tires to the front diagonally and the front tires straight back. This rotation will help to maintain evenness.

If the trailer has not moved in the last two months it should be moved slightly to balance wear on the tread. At this point bulging and cracking should be checked for on the sides of the tires to verify that there is no risk of blowout (Harper, 2010).

The tire lug nuts should be checked for tightness before each use of the trailer. If they can be tightened by hand they are too loose (Harper, 2010).

The bearings on the trailers wheels should be checked every 6 months or whenever grinding metal is heard while the trailer is moving.

To maintain the bearings the E-Z lube cap should be removed and the cavity should be filled at least one third to one half full with lithium complex NLGI consistency #2 grease.

Every two years the bearings should be repacked. This includes removing each of the bearings and greasing each individually. During repacking, each bearing should be checked for wear and cleaned of debris. While working with the grease it is important the the grease does not make contact with skin, eyes and clothing (Harper, 2010).

In order to maintain brakes it is important that the switches, pads and lights all be maintained. The following sections discuss these procedures (Harper, 2010).

For each trip the following five steps should be followed to inspect the battery brake and switch the instructions for which can be found in the How To section.

The brakes should be inspected once a year. the brakes are checked by removing tires and inspecting each of the mechanical parts as well as the brake pads. The pads should be replaced if there thickness is measured to be less than 4/32". This task can be performed by a mechanic or trained. CCAT technician (Harper, 2010).

For each trip the lights should be connected to the vehicle and checked. If one of the lights does not work confirm that the corresponding light on the vehicle works. If that is not the problem than the issue is with the connection between the trailer and the vehicle. Make sure that the connection is clean. If this does not solve the problem than check to make sure that the bulbs have not burnt out. As a last resort a mechanic or trained CCAT technician should investigate (Harper, 2010).

Powdered graphite can help to lubricate sticky locks. Grease and oil are actually counterproductive as they tend to attract debris that degrades the function of the lock. Graphite can be found at any local hardware store. The codes of the locks should be exchanged such that each of the three directors can remember the codes over there full directorship (Harper, 2010).

The lever of the trailer hitch should be lubricated every 6 months. The connection should not move around at all when the lever is closed. If this occurs tighten the latch by wrenching tight the nut under the hitch. The hitch ball should be lubricated with WD-40, grease, hitch ball wax or beeswax. Extra lubricant should be wiped away (Harper, 2010). 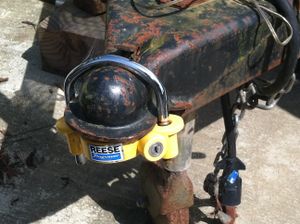 The battery vent is used to evacuate used hydrogen gas from the batteries during equalization. The vent should be cleared of debris that could clog the vent once every year (Harper, 2010). 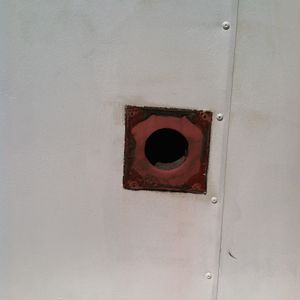 There currently is no fire extinguisher inside of the MEOW unit and one should be installed immediately. The extinguisher is maintained yearly by checking to make sure that it is fully charged according to the dial on the side and that there is no physical damage to it. If the dial is in the red zone than the extinguisher should be replaced (Harper, 2010).

Each of the bolts and screws on the trailer should be inspected before use. The racks should also be checked every time to make sure no rusting or corrosion has occurred. If corrosion is such that structural integrity is threatened, the racks for the panels should be replaced (Harper, 2010). 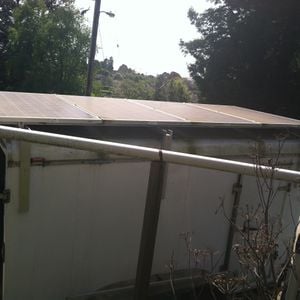 It is important to clean solar panels on a regular basis to get optimal performance. Usually dust and bird droppings prevent solar radiation to fall on solar cells and thereby reduce the power output of the solar panel. As MEOW is mobile vehicle and used for various purposes in different locations within the community, it is a good practice to inspect and clean the solar panels before every use.

Cleaning of the surface of the solar panels with warm water and dishwashing soap to remove any accumulation of dust is one of the most cost effective methods. When cleaning also clean the frame and backing of the solar panel. If the surface of the panel is hot due to outside ambient, it is recommended to cool it down before applying soap. The hot panels could cause soap residue to form on the panel that would inhibit the passage of light (Harper, 2010).

It is also advised to check open circuit voltage (Voc) and short circuit current (Isc) of the solar panel before every use of MEOW. These parameters are used to find out the state of degradation of each solar panel and to determine if further testing or maintenance is required on the panels. A solar panel that produces noticeably less power than the others in the array can act as a resistor rather than a power source, reducing the productivity of the entire array (Harper, 2010). 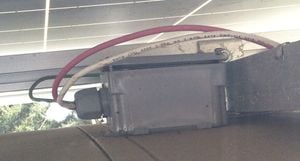 As humboldt county has relatively long rainy season, it is advisable to inspected junction box periodically to ensure that water is not collecting in the box. A maintenance person should look for degradation of the box itself or seal that could allow water into the junction box. If water is allowed to enter the junction box, the water could then enter the electronics located inside the trailer and cause electronic failure. 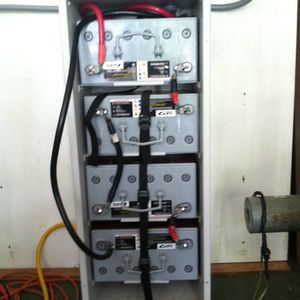 One of the advantage of using relatively more expensive Trojan GEL batteries is that they require relatively less maintenance as opposed to the sealed led acid (SLA) batteries, which required frequent monitoring of the electrolyte levels. Still for keeping these batteries healthy and durable, the system should maintain a "state of charge" that is above 80% of the battery's rated capacity. Improper charging or excessive discharging can decrease the battery life significantly. If the battery is discharged below 80% level, it should be recharged using an external source as soon as possible. The charge controller in MEOW is configured in a way to control the battery's state of charge. The display of the battery meter provides information about the state of charge of the battery. Never use the equalizing setting while using sealed batteries, as mentioned in the operation booklet associated with the system. This is simple because the default system setup does not have the equalization occurring. As long as no one sets the EQ setting then the batteries will not be over charged.

The other electrical devices of the trailer such as charge controller and inverter require little maintenance. A certified technician should be contacted in case of an operation problem of these devices.

Step by step process for maintenance and inspection of various components of CCAT MEOW are given below. These are based on the MEOW maintenance manual developed by the ENGR 535 class of 2010.

Step 2 : Remove the access panels from back side of each solar panel with the help of a screwdriver.
2 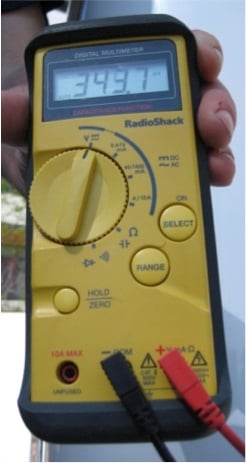 Step 5 : Record the readings for each panel and the ambient conditions in a maintenance log. If the panels vary by more than 20% in either voltage or current, contact appropriate solar technician.

Visually inspect the batteries to ensure they are not leaking or there is no crack in the outer jacket. Step 2 : Make sure the battery connections not corroded and secure.

Step 4 : Check the state of charge.

Step 5 : If fluid is on the top of the battery this means that the battery is being overcharged and the performance and life will be reduced.

Step 6 : Check that all vent caps are secured properly on the battery.

Step 5 : Clean the top of the battery, terminals and connections with a cloth or brush and a solution of baking soda and water. Do not allow cleaning solution to get inside the battery.

Step 5 : Keep the area around batteries clean and dry. 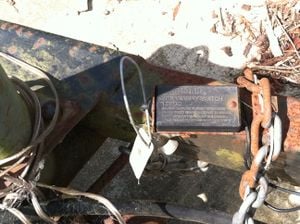 Verify the electric plug is not connected to the towing vehicle. Step 2 : The breakaway pin should be pulled forward in the direction of the hitch

Step 3 : A green light indication means that the brakes are charged if not the battery should be charged before departure.

Step 4 : When the battery is charged, test the brakes by attempting to move the trailer while the breaks are on.

Step 5 : The battery is charged using a maximum 1.2 Amp trickle charge. The battery should be replaced every 3-5 years depending on health.

This is only how to troubleshoot basic operations.

Maximizing the MEOW's utilization for community events and making it more accessible would help not only in spreading the awareness about renewable energy but also making MEOW economically viable.

Page data
Retrieved from "https://www.appropedia.org/w/index.php?title=CCAT_MEOW/OM&oldid=631089"
Cookies help us deliver our services. By using our services, you agree to our use of cookies.
Categories:
Maintenance categories:
Comments
Privacy policy · About Appropedia · Disclaimers · Mobile view · Content is available under CC-BY-SA-4.0 unless otherwise noted.
</html