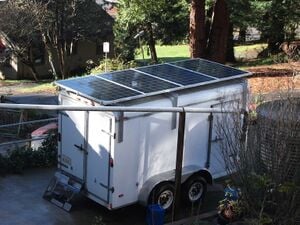 This page describes the development progress and the history of the Campus Center for Appropriate Technology's (CCAT's) Mobile Energy Operations Wagon (MEOW). Specifically, this page describes the work that took place on the second version of the trailer (MEOW V2) after the first version was stolen in 2010.

In December 2010, CCAT lent their Mobile Energy Operations Wagon (MEOW) V1 to a local eco-hostel. While away from the CCAT house, the 720 W photovoltaic (PV) trailer was stolen and vandalized. Some days after the burglary, CCAT received a call from the local police who said they had found the MEOW V1 abandoned on the side of a nearby highway. It turns out that the vandals had broken the hitch lock, attached the trailer to their own vehicle, and drove it miles away where they could remove all the components of value (i.e. the 720 W array, batteries, charge controller, and inverter) in a less conspicuous area. After the vandals stripped the trailer of all high-value components, they covered the trailer with a patchy coat of black spray paint to make it seem as though the trailer had been deserted by its owner (Fig 1) 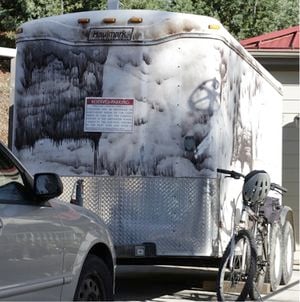 . The MEOW V1 had been one of CCAT's most effective tools used to disseminate knowledge of renewable energy and appropriate technology to students and community members. The theft of the MEOW V1 was a disappointing, but not a devastating, blow to the employees and volunteers of CCAT. It took nearly 18 months of hard work spent designing, fund raising, building, and repairing, but the CCAT house was finally able to get their beloved MEOW purring again. So was born, the MEOW V2 (Top Photo).

CCAT operates on a very limited budget (roughly $6,000/year for ALL projects). The most difficult task of bringing the PV trailer back to life, by far, was acquiring funding for the new components(e.g., PV modules, inverter, etc.). After two rejected proposals to the Humboldt Energy Independence Fund (HEIF) committee and many phone calls/emails to community members and local solar companies, it was David Katz of AEE Solar who was the most helpful at getting us what we needed. David donated four REC 230 W panels as well as his personal Outback GVFX48 inverter to CCAT. For the remaining components, David put us in contact with the Trojan Battery Company and Outback Power Systems from whom we were able to procure a battery bank at cost and a refurbished charge controller at no cost, respectively. We at CCAT would like to extend a hearty thank you to David Katz of AEE Solar, Outback Power Systems, and The Trojan Battery Company, for without their support, this project would not have been possible.

The components for the MEOW V2 that we received from our donors have several advantages and disadvantages from those of the MEOW V1. For starters, an advantage of the MEOW V2 is that the new PV array has a slightly higher wattage (920 W as apposed to 720 W), which allows us to harness more of the sun's energy. The second (and probably most significant) advantage is that the new Outback GVFX48 can operate in both off-grid and on-grid applications. Technically speaking, this inverter can be programed to divert any excess electricity to the utility grid when no primary load is detected. What this capability means is that when the MEOW V2 is parked in CCAT's driveway, the system can inject electricity into the PG&E grid and based on our existing net metering contract, CCAT (Associated Students) will receive a certain dollar amount per kWh that MEOW V2 produces. This feature is an obvious improvement since a key issue identified with the previous MEOW was that the available electricity was not put to any useful function when the trailer was parked in CCAT's driveway (which was most of the time); the Outback GVFX 48 solves this problem.

A disadvantage of the MEOW V2 is the amp-hour (aH) capacity of the new battery bank. Due to CCAT's budget, we were only able to acquire a 48 V, 102 aH battery bank (i.e. four 12 V, 102 aH (C-20) GEL cell batteries). This set-up will provide roughly 25% of the energy, or autonomous run-time (ART), that the MEOW V1 provided. However, when CCAT finds new funds, the MEOW V2's aH capacity can always be increased with sets of four 12V batteries placed in parallel with the existing battery bank. An advantage to the new Trojan GEL batteries is that they are maintenance free as opposed to the previous sealed led acid (SLA) batteries, which required employees to frequently monitor the electrolyte levels. Furthermore, there was always a risk that the sulfuric acid inside the SLA batteries would spill when the trailer was being towed. This is no longer a risk with the sealed GEL batteries.

A list of the component specifications for the MEOW V1 and MEOW V2 are given in the Table below.

This section summarizes the main tasks that were performed to get the MEOW running after the theft.

The theft and vandalism left our beloved trailer looking like a hideous piece of rotting garbage, so the first task the CCAT family worked on was getting a fresh coat of paint on the MEOW. Once the exterior was made presentable we proceeded to renovate the interior. The vandals had completely sawed of the system hardware panel where the previous inverter, charge controller, and battery monitor were mounted; we constructed a new system panel and maintained a compassionate attitude toward the thieves as we worked (Fig 2a and Fig 2b).

The PV rack turned out to be one of the most difficult components to rebuild. Although the bandits did not take the PV rack, in their mad dash efforts to remove and steal our valuable PV panels, they did manage to leave the rack system horribly mangled and more-or-less useless to us. Due to a lack of mechanical and structural expertise, our preliminary designs for the new rack weren't fully functional (each panel weighs roughly 40 lbs. and must be able to safely travel down the highway at speeds of 65 mph; headwinds encountered on the highway must also be considered). In the name of safety and a long lasting system, we decided to work with local professional John Davis at Solar Racks to build the new PV rack. For John's efforts, we traded him a couple of 60 W monocrystaline PV panels that had been lying around the CCAT house and had not been put to use in some years; because we are a worthy NGO, John also gave us a good deal on materials. By working with John we were able to give several students the opportunity to work in a metal working shop and receive hands-on experience with building solar racks (Fig 3 - 3b).

The final design for the rack was a stationary flat-mount (i.e. 0° tilt) rack (Fig 4a). This design was ultimately chosen for three reasons. The first reason is that a flat mount simplified the design and minimized materials cost. Second, we figured that a flat-mount rack would be much safer than a tilted or adjustable rack for the mobile system. The logic here was that if we were to make an adjustable rack, we would run the risk of someone accidentally leaving it 45 degrees during transport (which is likely since CCAT has a very high turn around rate of employees who don't always know the finer details of how the systems at CCAT work). Additionally, the rope and pulley system used for the adjustable rack on the MEOW V1 was not devoid of problems: the rack required the careful attention of two people to raise and lower the panels and the rack reportedly bowed at critical points. The third reason we went with the flat mount is that our analysis showed we would only lose 59 kWh/year (6%) in energy production as opposed to a tilted rack system (41°), and would lose 116 kWh/year (12%) with an adjustable rack. We decided the risks and costs of a tilted/adjustable rack didn't outweigh the benefit of the additional 6%/12% electricity we would receive.

Because CCAT is mainly a teaching and demonstration facility, we decided to take the reconstruction process as an opportunity to give a free PV system wiring workshop to HSU students and community members. The workshop was led by the Arcata based solar company Roger and His Band of Merry Solar Installers. Held over two separate weekends, the workshop series was very successful where over 20 participants learned the basics of PV wiring and left with the satisfaction of contributing to a fully functional solar system!

The four panels of the array were all wired in series (i.e. four series with one parallel string). This configuration simplified the wiring process and made the system safer by allowing less DC current to pass through the lines. Initially, we had some concern that the 150 V limit of the charge controller would be surpassed in an all series configuration. If all four panels were to be simultaneously open-circuited the system voltage would total 147 V (36.8 V x 4 panels); if one considers a safety factor of 1.25 (representing a cold morning with full sun) the system voltage could spike to 184 V and possibly fry the charge controller. However, after consulting with Roger and his professional team, they informed us that this situation is highly unlikely due to the flat (0°) tilt of the array, the local solar resource, and shading profile at the CCAT house.

As of November 2012, the MEOW V2 has only been wired for off-grid operation. The task of connecting the MEOW V2 to the grid still remains. The full energy producing capabilities of the system cannot be realized until this is done. Another task that remains to be done is to re-wire the bicycle dynamos (trickle chargers) that were connected to the MEOW V1 battery bank to the new system.

The Table below shows the monthly and annual estimates for the amount of electricity (kWh) the MEOW V2 is capable of producing. The calculations use NREL data for the solar resource in Arcata, CA at a horizontal tilt (2nd column) and the monthly shading profile in the CCAT driveway according to a solar path finder reading (Fig 5). The calculations are for the 920 W, flat-mount (i.e. 0°) array and consider a total system efficiency of 85% (93% for the inverter, 95% for the batteries, and 96% for wire losses and module soiling). The calculations estimate that the MEOW will produce roughly 870 kWh/year, which could change based on how often the trailer is moved from the CCAT driveway as well as the depth of discharge (DOD) that the batteries are cycled to. 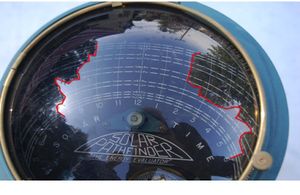 Fig 5: Solar Pathfinder reading on top of the MEOW while parked in the CCAT driveway (Credit: Nicholas Riedel)
Page data
Retrieved from "https://www.appropedia.org/w/index.php?title=CCAT_MEOW&oldid=633210"
Cookies help us deliver our services. By using our services, you agree to our use of cookies.
Categories:
Comments
Privacy policy · About Appropedia · Disclaimers · Mobile view · Content is available under CC-BY-SA-4.0 unless otherwise noted.
</html