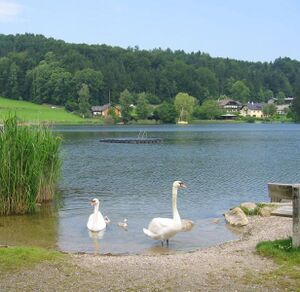 Austria, officially the Republic of Austria, is a landlocked East Alpine country in the southern part of Central Europe. It is composed of nine federated states, one of which is Vienna, Austria's capital and largest city. It is bordered by Germany to the northwest, the Czech Republic to the north, Slovakia to the northeast, Hungary to the east, Slovenia and Italy to the south, and Switzerland and Liechtenstein to the west. Austria occupies an area of 83,879 km2 (32,386 sq mi) and has a population of nearly 9 million people. While Austrian German is the country's official language, many Austrians communicate informally in a variety of Bavarian dialects.

The Transitforum Austria Tirol is an Austrian all-party non-governmental organization, which advocates for a reduction of international through traffic on Austrian roads, for environmental, economic, and medical reasons. The initiative is primarily targeted at truck transport.

The organization was founded in Tyrol, which is significantly affected by international through traffic, but later teamed up with similar groups across Austria. It is well known for its use of nonviolent direct action in campaigns, e.g. blocking motorways.

The Transitforum Austria Tirol and its chairman Fritz Gurgiser also voice their concerns, and often harsh criticism on politicians regularly in regional media, especially in Tyrol.

Share Vienna, a project of the university's Regional Centre of Expertise on Education for Sustainable Development (RCE Vienna)

A big, straightforward idea that shifts us to greener transport: Go anywhere in Austria for €3 a day, Oct 2 [2]

What could Vienna's low-cost housing policy teach the UK? Dec 12 [3]

The city that solved homelessness, Jun 28 [4]

'More green instead of grey' is the new Salzburg motto, Dec 9 [5]