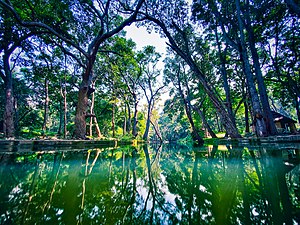 Andhra Pradesh (English: , Telugu: [ãːndʱrɐ prɐdeːʃ] (listen) abbr. AP) is a state in the south-eastern coastal region of India. It is the seventh-largest state by area covering an area of 162,975 km2 (62,925 sq mi) and tenth-most populous state with 49,386,799 inhabitants. It is bordered by Telangana to the north-west, Chhattisgarh to the north, Odisha to the north-east, Tamil Nadu to the south, Karnataka to the west and the Bay of Bengal to the east. It has the second longest coastline in India after Gujarat, of about 974 km (605 mi). Andhra State was the first state to be formed on a linguistic basis in India on 1 October 1953. On 1 November 1956, Andhra State was merged with the Telugu-speaking areas (ten districts) of the Hyderabad State to form United Andhra Pradesh. ln 2014 these merged areas of Hyderabad State are bifurcated from United Andhra Pradesh to form new state Telangana . Present form of Andhra similar to Andhra state.but some mandalas like Bhadrachalam still with Telangana. Amaravati serves as the capital of present Andhra with the largest city being Visakhapatnam.

The Dolphin Nature Conservation Society (DNCS) is a registered (no. 507/2001) voluntary environmental non-profit and non-governmental organization (NGO) located in Visakhapatnam, Andhra Pradesh, India. It is committed to the causes of nature conservation, environmental protection, research, education, and awareness. The society was founded on March 5, 2001, by Dr. Mantha Rama Murty and Dr. Mangathayi, who had previously launched several nature conservation programs in Andhra Pradesh, particularly in Visakhapatnam. The organization's activities are intended to instill a love for nature and conservation among people, especially among the younger generation. Notable research, documentation, conservation, and awareness campaigns of the society have involved Olive-Ridley Sea Turtles, intertidal rocky shore fauna and flora of the Visakhapatnam coast, and butterflies of the Eastern Ghats. The society's flagship project is the development and maintenance of the Biodiversity Park in Visakhapatnam.

Biodiversity Park, Visakhapatnam, is a botanical garden, an ex situ conservation park, first of its kind in Visakhapatnam, Andhra Pradesh, India. The park is located in the premises of the Rani Chandramani Devi Government Hospital. It extends over 3 acres (1.2 ha). Dolphin Nature Conservation Society (DNCS), Visakhapatnam, a registered, eco-friendly, non-government organization, has maintained it for 13 years and is now maintaining it in collaboration with the hospital and Visakhapatnam Metropolitan Region Development Authority. The park was inaugurated on 5 June 2002. This park has more than 2,000 species of plants. and has recorded visits by 60 species of birds and 105 species of butterflies. The park has become a "living laboratory" for education, awareness and research for students, and botanists, zoologists and researchers.

The sacred groves is a zone of Biodiversity Park, Visakhapatnam located in the premises of Rani Chandramani Devi Government Hospital. It has more than 100 sacred plant species, which are medicinal herbs with religious importance. Many sacred plants are becoming rare and endangered. Hence they are to be reared, protected, and conserved. The zone was inaugurated on February 5, 2017, by Kambhampati Hari Babu, a member of parliament from Visakhapatnam, Andhra Pradesh.

The Andhra Pradesh Forest Department deals with protection, conservation and management of forests. The total forest cover of the state after the bifurcation is left with an area of 22,862 square kilometres (8,827 sq mi). The forest in the state can be broadly divided into four major biotic provinces. They are:

Eastern Ghats region is home to dense tropical forests, while the vegetation becomes sparse as the Ghats give way to the Deccan Plateau, where shrub vegetation is more common. The vegetation found in the state is largely of dry deciduous types with a mixture of teak, Terminalia, Dalbergia, Pterocarpus, Anogeissus, etc.

Community Action for Sustainability
Page data
Retrieved from "https://www.appropedia.org/w/index.php?title=Andhra_Pradesh_community_action&oldid=656311"
Cookies help us deliver our services. By using our services, you agree to our use of cookies.
Categories:
Maintenance categories:
About Appropedia · Policies · Contact · Content is available under CC-BY-SA-4.0 unless otherwise noted.