From Appropedia
Redirected from Adelaide 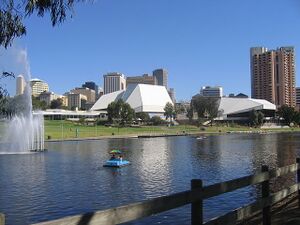 Adelaide ( (listen) AD-il-ayd) is the capital city of South Australia, the state's largest city and the fifth-most populous city in Australia. "Adelaide" may refer to either Greater Adelaide (including the Adelaide Hills) or the Adelaide city centre. The demonym Adelaidean is used to denote the city and the residents of Adelaide. The Traditional Owners of the Adelaide region are the Kaurna people. The area of the city centre and surrounding parklands is called Tarndanya in the Kaurna language.

Adelaide is situated on the Adelaide Plains north of the Fleurieu Peninsula, between the Gulf St Vincent in the west and the Mount Lofty Ranges in the east. Its metropolitan area extends 20 km (12 mi) from the coast to the foothills of the Mount Lofty Ranges, and stretches 96 km (60 mi) from Gawler in the north to Sellicks Beach in the south.

The Urban Orchard, Friends of the Earth Adelaide

In December 2021, Adelaide was named the world's second National Park City, after the state government had lobbied for this title.

It was ranked the most liveable city in Australia by the Property Council of Australia, based on surveys of residents’ views of their own city, between 2010 and 2013, dropping to second place in 2014.

Friends of the Earth Adelaide

Page data
Retrieved from "https://www.appropedia.org/w/index.php?title=Adelaide_community_action&oldid=657093"
Cookies help us deliver our services. By using our services, you agree to our use of cookies.
Categories:
About Appropedia · Policies · Contact · Content is available under CC-BY-SA-4.0 unless otherwise noted.