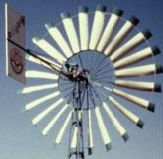 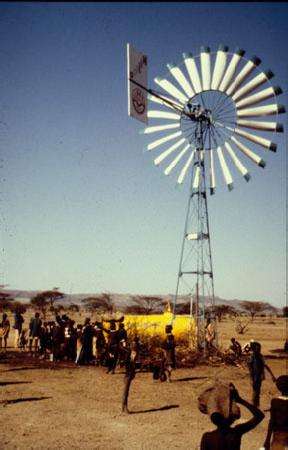 The wind has been a significant source of power for centuries. Early windmills in China and Southeast Asia lifted water into rice fields. In Europe the windmill developed into an enormous structure, nearly the size of a small sailing ship, developing power in the range of 25 hp and higher, for use in grain grinding, drainage and a multiple of small industrial tasks. The first windmills in North America and the Caribbean were of this type. In the late 19th century, water pumping windmills were manufactured by the thousands, and several million machines were operated by the end of this century. These were mostly lifting water for farm houses and livestock.

Wind generators for electricity spread by the hundreds of thousands across rural North America in the 1930s supplying the farm houses with small amounts of power for radios and a few lights. Both the water pumping windmills and the wind generators went into decline with the coming of rural electrification, which offered cheap electricity for running electric pumps and many more household uses. With the energy crisis, however, sales of water pumping wind mills and wind generators have greatly increased in the United States.

It is the water pumping windmill that appears to be the most immediately relevant for rural energy needs in the developing countries, both for high value community water supplies and for irrigation pumping. Irrigation is the biggest single factor in improving farm yields, and there are many places where low-lift irrigation on small plots could be accomplished with windmills. Thailand, Greece, Japan, Peru, and Portugal are among the nations where significant numbers of irrigation windmills have been used in recent times. In North America, farmers built thousands of scrap wood waterpumping windmills before the manufactured steel machines appeared. In all of these national experiences, local windmill designs were developed to fit pumping needs, wind conditions, and materials available. These machines were built in small workshops; this kept prices low and repair skills nearby. In other countries where manufactured windmills have been directly introduced, the initial high cost and lack of repair skills have greatly reduced their attractiveness. (South Africa and Australia may be exceptions. In these industrialized countries, variations in the American fan-bladed windmill have been widely used to water livestock and isolated farmhouses. These are expensive high performance machines requiring infrequent but skilled maintenance and repair.)

Thus the historical record suggests that successful windmill promotion programs in developing countries will need to focus on locally adapted designs and craftsperson based production using local materials, with a limited number of manufactured parts. Promotion programs might include credit mechanisms whereby the windmill itself is both loan and collateral. Also of interest is the Las Gaviotas approach in which the buyer assembles and installs a metal windmill from a kit (see Un Molino de Viento Tropical).

Waterpumping windmills for irrigation purposes, or windpumps, are most economically competitive in areas that do not already have electricity for powering irrigation pumps. In these circumstances the alternatives are generally small engine driven pumps that are expensive to fuel and maintain. Low-lift applications for high value vegetable farming may be economically competitive in many parts of the world. The economic appeal of locally built windmills is even greater when the savings of scarce foreign exchange from reduced foreign imports and village level economic multiplier effects are considered. Other advantages of locally built windmills include the creation of village capital using local labor and materials, much lower initial cost, and avoidance of maintenance problems associated with engine-driven pumps. Such windmills appear to have more frequent but simpler maintenance requirements than manufactured windmills.

A small number of people are working on water pumping windmill designs in developing countries. The interesting contemporary examples of locally evolved designs include the Cretan sail windmills, the bamboo and cloth sail windmills of Thailand's salt ponds, and the locally built windmills of the Cape Verde Islands. All of these were built and maintained by local craftspeople. New designs of fabricated steel windmills that attempt to reduce costs have been built and tested in India, Sri Lanka, and elsewhere, for both water supply and irrigation applications.

In the United States, isolated houses have become a major market for wind generators for electricity. Wind Power for Farms, Homes and Small Industry and The Wind Power Book are recommended for readers considering such an installation. Technical advances now also allow a windmill to feed surplus power back into a conventional electric grid, a practice which makes wind-generated electricity in urban and suburban settings much more attractive than before, as the substantial expense of a battery system can be avoided.


Small scale windmills can be used to generate electricity in rural locations for people with little or no existing power. William Kamkwamba has received international recognition for his ability to create a windmill in his home country, Malawi. Using William's idea, an Optimized Blade Design for Homemade Windmills has been created.

For any windmachine, the choice of site is very important. Trees and buildings can greatly reduce the useful winds reaching a windmill. A small difference in wind speed can mean a big difference in power available, because the power in the wind varies with the cube of the wind speed. Thus a 12-mph wind has 8 times as much power as a 6-mph wind. Wind generators operate at the highest possible wind speeds, and the user will usually want to find the windiest spot possible for such an installation. Waterpumping windmills, on the other hand, need greater protection from the extremes of high wilds, and are usually designed to operate in low and medium winds. We have included several publications on site selection for wind machines, including vegetative indicators of high average windspeeds at particular locations.

Main article: Energy from the wind

Page data
Retrieved from "https://www.appropedia.org/w/index.php?title=Windmills&oldid=600446"
Cookies help us deliver our services. By using our services, you agree to our use of cookies.
Categories:
Maintenance categories:
About Appropedia · Policies · Contact · Content is available under CC-BY-SA-4.0 unless otherwise noted.