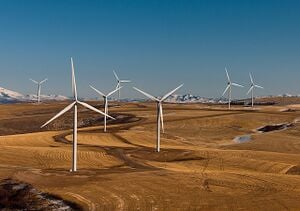 Wind is the flow of air on a large scale. It is the result of the uneven heating of the Earth by the sun and the fact that temperatures are invariably trying to reach an equilibrium (heat is always moving to a cooler area). The wind energy is the kinetic energy of the air in motion.

On Earth, wind is relatively mild - astronomers have discovered that on other planets, winds can reach thousands of kilometers per hour. This is one of the ways in which Earth's exceptional conditions make life possible for us, and remind us of the care we need to take of this unique planet.

With this current state of our environment, we now need to be utilizing more renewable energies such as wind. Wind turbines can be placed in farmlands and other open fields that have no obstructions or all structures around them.

The US NREL wind power density classification separates the wind energy into classes from 1 to 7. Wind speeds for class 1 are 9.8 mph or less on average while the average for a class 7 is 21.1 mph or even more. Each class has a specific amount of watts per square meter (ie wind power classes 3: 300–400 W/m2 at 50 m altitude; wind power class 7: 800–2000 W/m2 at 50 m altitude). For effective power production, at least class 2 winds (11.5 mph average speed) are required.

Although it is possible to determine the local wind energy level yourself, global maps are available which instantly provide you a good idea of the wind energy at a specific location and altitude. The advantage of this is that a lot of time can be saved (measurements need to be taken over a long period of time) and there is also no risk of miscalculation. Using common sense (ie on a unobstructed location, ...), we can determine a suitable location within an area that is marked on the map as high in wind power.

Determining a suitable location within a region[edit | edit source] 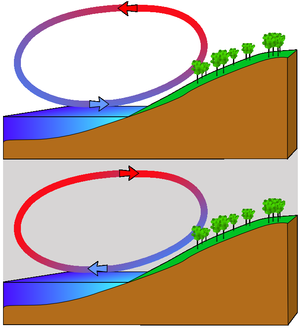 Flow of winds near shore

A suitable location for a wind energy harvester within a region that has high wind energy can be found easily by means of utilizing common sense. Besides the obvious choosing of a location that is free of wind breaks, obstructions, additional wind energy can be obtained near shore and mountains. When installing a wind turbine you should have an area with out tall buildings or structures as it will have an affect on the turbines efficiency to produce electricity. The turbine should be at a high point on the property and away from large buildings. The average home uses about 9,400 Kilowatt-hours per year and turbines for the house are rated at about 5-15 kW.

There are two different structures of turbine one horizontal and the other a vertical axis. Horizontal axis turbines need to be facing the direction of the wind while vertical axis can face any direction but requires more ground space then horizontal. Most turbines require little maintenance and have a life span of about 20 years although it varies. This is a great way to lower your energy bill by harnessing free energy year round. Although the electricity produced is intermittent because it depends on direction and speed of the wind your only cost will be instillation and parts so they are still a viable option for large scale renewable energy projects or home instillations to lower your family's non-rewnable energy consumption.

On lower altitudes above the soil, VAWT's (vertical axis wind turbines) are more efficient than HAWTs and although you should first try to place your energy harvester as high as possible (and use a VAWT), one should use a VAWT for the lower altitudes.

How they Work[edit | edit source]

A turbine is a device in which work is done by the fluid on a set of rotating blades. This results in a pressure drop from the inlet to the outlet of the turbine. This device can also produce some heat which gets emitted to the surrounding environment. This heat transfer is often very small and not noticeable.

In an appropriate context; the following uses are possible:

Page data
Retrieved from "https://www.appropedia.org/w/index.php?title=Wind_power&oldid=624336"
Cookies help us deliver our services. By using our services, you agree to our use of cookies.
Categories:
Maintenance categories:
Comments
Privacy policy · About Appropedia · Disclaimers · Mobile view · Content is available under CC-BY-SA-4.0 unless otherwise noted.
</html