From Appropedia
Redirected from Sydney 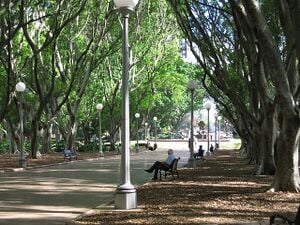 Sydney ( (listen) SID-nee; Dharug: Gadi; Greater Sydney, Dharug: Eora) is the capital city of the state of New South Wales, and the most populous city in both Australia and Oceania. Located on Australia's east coast, the metropolis surrounds Sydney Harbour and extends about 70 km (43.5 mi) on its periphery towards the Blue Mountains to the west, Hawkesbury to the north, the Royal National Park to the south and Macarthur to the south-west. Sydney is made up of 658 suburbs, spread across 33 local government areas. Residents of the city are known as "Sydneysiders". As of June 2021, Sydney's estimated metropolitan population was 5,231,147, meaning the city is home to approximately 66% of the state's population. Nicknames of the city include the 'Emerald City' and the 'Harbour City'.

Sydney is well endowed with open spaces and has many natural areas. Many of these exist even within the compact city centre. These include the Chinese Garden of Friendship and Hyde Park (which is named after London's Hyde Park). The metropolitan area contains several national parks, including the Royal National Park, the second oldest national park in the world (after Yellowstone National Park), which occupies an area of 132 square kilometres (51 sq mi; 13,200 ha; 33,000 acres). Completing Sydney's wide array of green spaces, the leader is the Royal Botanical Gardens, with its large amount of green spaces, lush plants and colourful flowers.

Although Sydney developed organically after the arrival of the First Fleet, the city parks and open spaces were a part of early town planning to provide relief from the bustle and monotony of the city streets. Hyde Park is the oldest park in the city.

Australia's culture of car dependency is creating unnecessary urban congestion, time and financial costs for households and business, and contributing to Australia's high level of carbon emissions. The city of Sydney introduced a car-sharing policy in 2011 to encourage shared use of vehicles.

Car-sharing operators must offer fuel-efficient and low-emissions vehicles, make the cars available via a 24-hour web- and phone-based booking system, and provide a monthly report on the use of car-sharing parking spaces. The policy contains provisions that prevent spaces allocated to car sharing from being sold or transferred to new operators, and there is an annual fee for car-sharing operators to cover the administration costs of the policy.

According to the city of Sydney, they currently provide around 700 car-sharing spaces, which are utilized by two operators. As reported by Sydney Media, just five years after the policy was introduced the city has already exceeded its target of signing up 10 percent of households by 2016. Moreover, an average of nine people sign up to the scheme every day, which is utilized by over 26,000 customers — roughly 19,000 residents and 7,000 local businesses. An independent evaluation of the policy's impact was commissioned by the city in 2012. The SGS Economics and Planning study found that car sharing had already saved users $21 million per year, mostly from deferred car purchases amounting to $18.5 million. The policy also contributed to decreased travel times, reduced congestion, and lower carbon emissions.[1]

As climate change, greenhouse gas emissions and pollution have become a major issue for Australia, Sydney has in the past been criticised for its lack of focus on reducing pollution, cutting back on emissions and maintaining water quality. Since 1995, there have been significant developments in the analysis of air pollution in the Sydney metropolitan region. The development led to the release of the Metropolitan Air Quality Scheme (MAQS), which led to a broader understanding of the causation of pollution in Sydney, allowing the government to form appropriate responses to the pollution. The 2019–20 Australian bushfire season significantly impacted outer Sydney, and consequently dramatically reduced the air quality of the Sydney metropolitan area leading to a smoky haze that lingered for many days throughout December. The air quality was 11 times the hazardous level in some days, even making it worse than New Delhi's, where it was also compared to "smoking 32 cigarettes" by Associate Professor Brian Oliver, a respiratory diseases scientist at the University of Technology Sydney.

Australian cities are some of the most car-dependent cities in the world, especially by world city standards, although Sydney's is the lowest of Australia's major cities at 66%. Furthermore, the city also has the highest usage of public transport in an Australian city, at 27%–making it comparable with New York City, Shanghai and Berlin. Despite its high ranking for an Australian city, Sydney has a low level of mass-transit services, with a historically low-density layout and significant urban sprawl, thus increasing the likelihood of car dependency. Strategies have been implemented to reduce private vehicle pollution by encouraging mass and public transit, initiating the development of high density housing and introducing a fleet of 10 new Nissan LEAF electric cars, the largest order of the pollution-free vehicle in Australia. Electric cars do not produce carbon monoxide and nitrous oxide, gases which contribute to climate change. Cycling trips have increased by 113% across Sydney's inner-city since March 2010, with about 2,000 bikes passing through top peak-hour intersections on an average weekday. Transport developments in the north-west and east of the city have been designed to encourage the use of Sydney's expanding public transportation system.

The City of Sydney became the first council in Australia to achieve formal certification as carbon-neutral in 2008. The city has reduced its 2007 carbon emissions by 6% and since 2006 has reduced carbon emissions from city buildings by up to 20%. The City of Sydney introduced a Sustainable Sydney 2030 program, with various targets planned and a comprehensive guide on how to reduce energy in homes and offices within Sydney by 30%. Reductions in energy consumption have slashed energy bills by $30 million a year. Solar panels have been established on many CBD buildings in an effort to minimise carbon pollution by around 3,000 tonnes a year.

The city also has an "urban forest growth strategy", in which it aims to regular increase the tree coverage in the city by frequently planting trees with strong leaf density and vegetation to provide cleaner air and create moisture during hot weather, thus lowering city temperatures. Sydney has also become a leader in the development of green office buildings and enforcing the requirement of all building proposals to be energy-efficient. The One Central Park development, completed in 2013, is an example of this implementation and design.

Do Sydney and Canberra really need to choose between light rail and trees? Apr 25 [5]