From Appropedia
Redirected from South Carolina 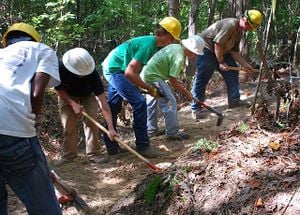 South Carolina ( (listen)) is a state in the coastal Southeastern region of the United States. It is bordered to the north by North Carolina, to the southeast by the Atlantic Ocean, and to the southwest by Georgia across the Savannah River. South Carolina is the 40th most extensive and 23rd most populous U.S. state with a recorded population of 5,124,712 according to the 2020 census. In 2019, its GDP was $213.45 billion. South Carolina is composed of 46 counties. The capital is Columbia with a population of 137,300 in 2020; while its largest city is Charleston with a 2020 population of 150,277. The Greenville–Spartanburg-Anderson metropolitan area is the most populous in the state, with a 2020 population estimate of 1,455,892.

Studies show that South Carolina is among a string of "Deep South" states that will experience the worst effects of climate change. According to the United States Environmental Protection Agency:

South Carolina's climate is changing. Most of the state has warmed by one-half to one degree (F) in the last century, and the sea is rising about one to one-and-a-half inches every decade. Higher water levels are eroding beaches, submerging low lands, and exacerbating coastal flooding. Like other southeastern states, South Carolina has warmed less than most of the nation. But in the coming decades, the region's changing climate is likely to reduce crop yields, harm livestock, increase the number of unpleasantly hot days, and increase the risk of heat stroke and other heat-related illnesses.

As of January 2020, "South Carolina’s failure to develop a comprehensive climate plan means the state has no overall effort to cut greenhouse gas pollution, limit sprawl or educate the public on how to adapt to the changing climate. W

Page data
Retrieved from "https://www.appropedia.org/w/index.php?title=South_Carolina_community_action&oldid=641733"
Cookies help us deliver our services. By using our services, you agree to our use of cookies.
Categories:
About Appropedia · Policies · Contact · Content is available under CC-BY-SA-4.0 unless otherwise noted.