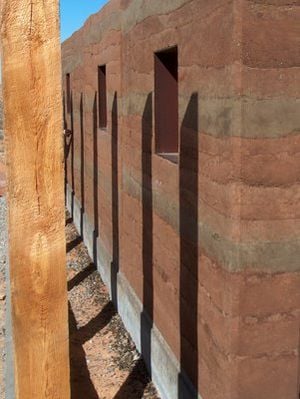 Rammed earth, also known as taipa[1] (Portuguese), tapial (Spanish), pisé de terre or simply pisé (French), is a technique used in the building of walls using the raw materials of earth, chalk, lime and gravel. It is an ancient building method that has seen a revival in recent years as people seek more sustainable building materials and natural building methods. Rammed earth walls are simple to construct, incombustible, thermally massive, very strong and hardwearing. Conversely they can be labour-intensive to construct without machinery (powered rammers), and if improperly protected or maintained they are susceptible to water damage. Traditionally, rammed earth buildings are found on every continent except Antarctica. From temperate and wet regions of north Europe [2] to semi dry deserts, mountain areas and the tropics. The availability of useful soil and building design for the local climatic conditions are the factors which favour its use.

Building a rammed earth wall involves a process of compressing a damp mixture of earth that has suitable proportions of sand, gravel and clay (sometimes with an added stabilizer) into an externally supported frame, creating a solid wall of earth. Historically, stabilizers such as lime or animal blood were used to stabilize the material, whilst modern rammed earth construction uses lime, cement or asphalt emulsions. Some modern builders also add coloured oxides or other items such as bottles or pieces of timber to add variety to the structure.

A temporary frame (formwork) is first built, usually out of wood or plywood, to act as a mold for desired shape and dimensions of each wall section. The frames must be sturdy and well braced, and the two opposing wall faces clamped together, to prevent bulging or deformation from the high compression forces involved. Damp material is poured in to a depth of between 100 to 250mm, and compressed to around 50% of its original height. The compression of material is done iteratively in batches, to gradually build up the wall to the required height dictated by the top of the frame. Compression was historically done by hand with a long ramming pole, and was very labor-intensive. Modern construction can be more efficient by employing pneumatically powered tampers.

Once the wall is complete, it is strong enough that the frames can be immediately removed. This is necessary if a surface texture (e.g. by wire brushing) is desired, since walls become too hard to work after about an hour. The walls are best constructed in warm weather so that they can dry and harden. Walls take some time to dry out completely, and may take up to two years to completely cure. Compression strength increases with increased curing time, and exposed walls should be sealed to prevent water damage.

In modern variations of the method, rammed earth walls are constructed on top of conventional footings or a reinforced concrete slab base. 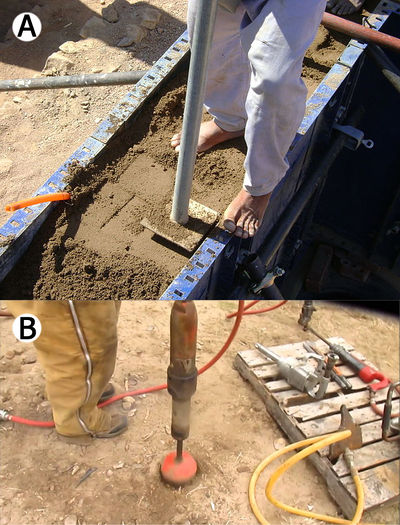 (A) Picture showing manual ramming of earth in metallic shutters. This technique is quite labor intensive (photo taken in Sinai, Egypt). (B) Pneumatic tamper.

Note the "hang tu"-method used at Great Wall of China: used layers of 10-15 cm loose earth (between formwork), which was then rammed with poles. Thickness: up to 10,6m (which is much thicker than what is optimal).

The compression strength of rammed earth can be up to 4.3 MPa. This is less than the value of a similar thickness of concrete, but more than strong enough for use in domestic buildings.[3]Indeed, properly built rammed earth can withstand loads for thousands of years, as many still-standing ancient rammed earth structures around the world attest.[4] Rammed earth using re-bar, wood or bamboo reinforcement can prevent failure caused by earthquakes or heavy storms. Mixing cement with the soil mixture can also increase the structure's load bearing capacity but can only be used in clay-poor mixtures. The USDA observed that rammed earth structures last indefinitely and could be built for no more than two-thirds the cost of standard frame houses.[5]

Rammed earth has been used around the world in a wide range of climatic conditions, from wet northern Europe to dry regions in Africa.

Soil is a widely available, low cost and sustainable resource, and harvesting it for use in construction has minimal environmental impact.[6] This makes rammed earth construction highly affordable and viable for low-income builders. Unskilled labor (often friends and family) are able to provide most of the necessary labor, and today more than 30 percent of the world's population uses earth as a building material.[3]

While the cost of material is low, constructing rammed earth without mechanical tools can be a very time consuming project; however with a mechanical tamper and prefabricated formwork it can take as little as two to three days to construct the walls for a 2000 to 2200 ft2 house.[3]One of the significant benefits of rammed earth is its excellent thermal mass; like brick or concrete construction, it can absorb heat during the day and release it at night. This can even out daily temperature variations and reduce the need for air conditioning and heating. However rammed earth, also like brick and concrete, often requires insulation in colder climates. It must also be protected from heavy rain and insulated with vapor barriers.[4]When finished and without paint or other finish, the walls have the color and texture of natural earth. Blemishes can also be patched up using the soil mixture as a plaster and sanded smooth. Care needs to be taken to avoid moisture-impermeable finishes such as cement render, as these will impair the ability of the wall to desorb (rid itself of) moisture, leading to a loss of compressive strength.

Nails or screws can be driven easily into well-cured walls, and they can be effectively patched with the same material used to build them.

Because rammed earth structures use locally available materials, they typically have low embodied energy and generate very little waste. The soils used are typically subsoils low in clay, between 5% and 15% typically with the topsoil retained for agricultural use. Ideally, the soil removed in order to prepare the building foundation can be used, further reducing cost and energy used for transportation.[6]Rammed earth buildings reduce the need for lumber because the formwork used is removable and can be continually reused.[7]

Rammed earth can effectively control humidity where unclad walls containing clay are exposed to an internal space. Humidity is held between 40% and 60% which is the ideal humidity range for asthma sufferers and the storage of susceptible items, such as books.

When cement is used in the earth mixture, sustainable benefits such as low embodied energy and humidity control will not be realized. Manufacture of the cement itself adds to the global carbon dioxide burden at a rate of 1.25 tonnes per tonne of cement produced.[8] Partial substitution of cement with alternatives such as ground granulated blast furnace slag has not been shown to be effective and brings other sustainability questions with it.[9]

Rammed earth can contribute to the overall energy-efficiency of buildings. The density, thickness and thermal conductivity of rammed earth makes it a particularly suitable material for passive solar heating. Warmth takes almost 12 hours to work its way through a 350mm thick wall.[3]The material mass and clay content of rammed earth allows the building to "breathe" more than concrete structures, avoiding condensation issues without significant heat loss.[3]Rammed earth housing has been shown to resolve problems with homelessness caused by otherwise high building costs, as well as to help address the ecological dilemma of deforestation and toxic building materials associated with conventional construction methods.[10]

Evidence of the early use of rammed earth has been seen in Neolithic archaeological sites of the Yangshao culture and the Longshan culture in China along the Yellow River dating back to 5000 BCE. By 2000 BCE, the use of rammed earth architectural techniques was commonly used for walls and foundations in China.[11]

"Constructed in 1821, the Borough House Plantation complex contains the oldest and largest collection of 'high style' pise de terre (rammed earth) buildings in the United States. Six of the 27 dependencies and portions of the main house were constructed using this ancient technique, which was introduced to this country in 1806 through the book Rural Economy, by S.W. Johnson." An outstanding example of rammed earth construction in Canada is St. Thomas Anglican Church (Shanty Bay, Ontario) built between 1838 and 1841.

The 1920s through the 1940s was an active research period for rammed earth construction in the US. South Dakota State College carried out extensive research and built almost 100 weathering walls of rammed earth. Over a period of thirty years the college researched the use of paints and plasters in relation to colloids in soil. In 1945 Clemson Agricultural College of South Carolina published their results on rammed earth research in a pamphlet called "Rammed Earth Building Construction." In 1936 on a homestead near Gardendale, Alabama, the United States Department of Agriculture constructed an experimental community of rammed earth buildings with architect Thomas Hibben. The houses were built inexpensively and sold to the public, along with land sufficient for a garden and small livestock plots. The project was a success and provided valuable homes to low-income families.[3]USAID is working with undeveloped countries to improve the building science around rammed earth houses. They also financed the writing of the "Handbook of Rammed Earth" by Texas A&M University and the Texas Transportation Institute. The handbook was never available for purchase by the public until the Rammed Earth Institute International gained permission to reprint it.[3]Interest in rammed earth fell after World War II when the prices of modern building materials dropped. Rammed earth began to be viewed as substandard, and today it often meets opposition from contractors, engineers, and tradesmen who are unfamiliar with earth construction techniques.

Earthships are a type of earth-sheltered, passive solar house that is designed to work autonomously. Earthships are made using either earth-filled tires or sand bags.

The tires (if used) are made by ramming them with earth, hereby converting them into usable "bricks". This is a simple and affordable building method and yields walls with a great load-bearing capacity. The tires in an Earthship are generally made in place because, when properly made, they weigh as much as 300 pounds and can be very difficult to relocate.