Earthships are a type of earth-sheltered, passive solar house that is designed to work autonomously. Earthships are made using either earth-filled tires or sand bags.

The tires (if used) are made by ramming them with earth, hereby converting them into usable "bricks". This is a simple and affordable building method and yields walls with a great load-bearing capacity. The tires in an Earthship are generally made in place because, when properly made, they weigh as much as 300 pounds and can be very difficult to relocate. 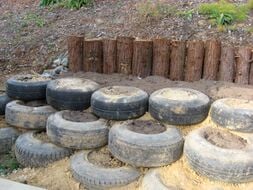 The earthship was designed in the 1970s by Mike Reynolds. Earthships were primarily designed to be buildings that could be created by any average person (without any construction skills). Secondly, it would be made predominantly from natural/recycled and cheap building materials. Finally, it would be operated on natural energy sources and be independent from the mains electricity grid, water supply network and sewage system.

Reynolds' vision in the 1970's eventually took the form of U-shaped earth-filled tire house. As a concept, the Earthship was initially not limited to tires - any dense material with a potential for thermal mass, such as concrete, adobe, or stone could theoretically be used to create an Earthship. However, the earth-rammed tire version of the Earthship was preferred by Reynolds, mostly due to their wide availability and very low cost.

After designing the concept, Reynolds headed off to found Solar Survival Architecture (now Earthship Biotecture) to sell his services on building earthships.

Since its start-up, Earthship Biotecture has been building and inventing new types of earthships, so that at present, 3 types can be distinguished (all of which can be still bought today).

The most versatile and economical Earthship in terms of construction and building is the packaged earthship. This earthship comes in (partially) prefabricated construction packages and with pre-designed drawings. This "Off-the-rack" aspect makes it a fairly easy to construct the building. Sizes begin at a 607 square foot ("Nest" studio) and go up to a 3 bed, 2 bath Earthship and larger.

Modular Earthships provide as the name implies, the ability for the buyer to compose his earthship entirely to his liking. A greater variety of spaces than packaged Earthships and more sculptural rooms are available herefore. Because all the rooms are equipped with thermal mass insulation, the earthship will still provide in its thermal stability it is famous for.

The Nautilus Earthship is a unique spiral design earthship based on a sea shell. The idea around this is that Earthships need to interact with this planet's natural phenomena; thus the sun, the wind, the thermal mass of the earth, the rain, and even the spiral pattern in all life.[1] 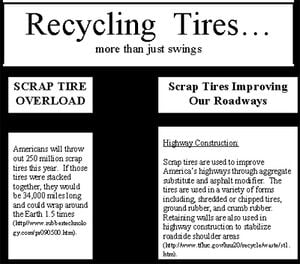 Whole tires are used to construct walls to reinforce unstable ground. Each tire is filled with compacted dirt, as shown in Figure 1. Tires are tacked vertically, adjacent tires are fastened together and metal posts are driven through the tire centers and anchored into the ground. 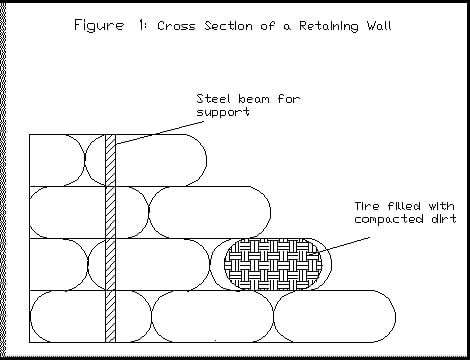 As mentioned earlier, earthships do not connect to a water supply network. Instead, earthships are designed to catch and use water from the local environment. This is generally done by gathering water (as rain or snow) using a rainwater harvesting system. As water collects on the roof it is channeled through a silt catching device and into a cistern. The cisterns are positioned so they gravity feed a WOM (water organization module), that filters out bacteria and makes it suitable for drinking. Water is then pushed into a conventional pressure tank to create common household water pressure. The water is then used for bathtub/shower, sink/dishwasher and finally flush toilet (if present).

In most early earthships though, gradual polluting of the water (as mentioned above) was not practiced. Instead the early earthships opted for the use of plants placed at outlets of fixtures (called "planters") to regain the nutrients lost (from the soaps, ...) and water from the greywater. This was possible as any greywater made was only "polluted" with just soap, which is often not environmentally damaging). Usually, a single plant is placed directly in front of the pipe, but mini drain fields are also sometimes used. The pipe is made large enough (5,08cm) so that the formation of underground gas (from the greywater) is avoided. This is done with kitchen, bathroom sinks and even showers, washing and dishwashing machines. The plants are usually placed indoors with the sinks and outdoors with the washing/dishwashing machines and shower (to avoid indoor "floods"). Also, with the latter, larger drain fields are used instead of a mere placing before a outlet.[3][4]

In the early earthships, blackwater (water that has been used in a toilet), was not created as the use of conventional flush toilets was discouraged.[5] Instead, composting toilets were advocated, which use no water at all.

However, with the new designs created by Michael Reynolds, flush toilets have now found a place in the earthship and the general water system has been redesigned according to the new "6-step process".[6][7] Now, the created blackwater is sent to a solar-enhanced septic tank that is often called the "incubator". The solar enhanced septic tank stores the sun's heat in its concrete mass, which is insulated, to help the anaerobic process. Water from the incubator is channeled out to an exterior botanical cell.

The greywater treatment works as follows: first it is channeled through a grease and partical filter/digester and into a 30"-60" deep rubber lined botanical cell, a miniature living machine, within the Earthship. Oxygenation, filtration, transpiration and bacteria encounter all take place within the cell and help to cleanse the water (Reynolds 2000). Within the botanical cell filtration is achieved by passing the water through a mixture of gravel and plant roots. The plant roots add oxygen to the water and remove nitrogen as it is filtered. The plants also take up water through their roots and transpire it via their leaves, which then helps to humidify the air. In the cell, bacteria will naturally grow and help to cleanse the water.

Water from the low end of the botanical cell is then directed through a peat moss filter and collected in a reservoir or well. This reclaimed water is then passed once more through a grey water board (see earthship.net) and used to flush conventional toilets.

Earthships do not connect to a mains electricity grid. Instead, they are designed to collect their own energy from a variety of sources. In practice, the majority of the required electrical energy is harvested from the sun and wind. Photovoltaic panels and wind turbines are placed on or near the Earthship and generate DC energy which is then stored in deep cycle batteries. Additional energy, if required, can be obtained from fuel-powered generators or by integrating with the city grid. The users of the earthship are however asked to spread their energy use over the day (this is known as energy stacking). This allows the batteries to be used as efficiently as possible.

The interior climate of an Earthship is stabilized and made comfortable by taking advantage of many phenomena. Mainly, the Earthship tries to take advantage of the properties of thermal mass and passive solar heating and cooling. Examples are trombe walls and other technologies as skylights.

The load bearing walls of an Earthship, which are made from steel belted tires rammed with earth, serve two purposes. First, they hold up the roof, and second, they provide a dense thermal mass that will soak up heat during the day and radiate heat during the night, keeping the interior climate relatively comfortable all day. Internal, non-load-bearing walls are often made of a "honey comb" of recycled cans joined by concrete and are referred to as tin can walls. These walls are usually thickly plastered with adobe or stucco.

The roof of an Earthship is heavily insulated - often with earth or adobe - for added energy efficiency.

In addition to high thermal mass, some Earthships may be earth sheltered. The benefits of earth sheltering are twofold because it adds to the thermal mass and, if the Earthship is buried deep enough, allows the structure to take advantage of the earth's stable temperature.

The Earthship is designed in such a way that the sun provides heating, ventilation and lighting. To take advantage of the sun, an Earthship (in the northern hemisphere) is positioned so that its southern wall, which is nonstructural and made mostly of glass sheets, faces directly south. This positioning allows for optimum solar exposure. The buildings are also horseshoe-shaped to maximize sunlight and warmth in the colder months. Likewise, the thick, dense outer walls provide effective insulation against summer heat.

To allow the sun to heat the mass of the Earthship, the southern wall is angled so that it is perpendicular to light from the winter sun. This allows for maximum exposure in the winter, when heat is wanted, and lesser exposure in the summer, when heat is to be avoided. Some Earthships, especially those built in colder climates, use insulated shading on the southern wall to reduce heat loss during the night (Reynolds 2000).

The use of insulation on the outside of tire walls, which was not common in early designs, is improving the viability of Earthships in every climate without compromising their durability.

The earthships usually use their own natural ventilation system. It consists of cold(er) air coming in from a front window, especially made for this purpose and flowing out through (one of) the skylights that are placed on the eartship. As hot air rises, the system maintains itself and keeps sucking in (and out), air.

Earthships rely on a balance between the solar heat gain and the ability of the tire walls and subsoil to transport and store heat. The design intends to require little if any auxiliary heat. Some earthships have suffered from over-heating and some from over-cooling, because of a failure to adjust for local conditions.

Some earthships appear to have serious problems with heat loss. In these cases heat appears to be leaking into the ground constantly during the heating season and being lost. This situation may have arisen from the mistaken belief that ground-coupled structures (building in thermal contact with the ground) do not require insulation. The situation may also be due to large climatic differences between the sunny, arid and warm Southwest (of the USA) where earthships were first built and the cloudier, cooler and wetter climates where some are now being built. Malcolm Wells, an architect and authority on earth sheltered design, recommends R-value 10 insulation between deep soils and heated spaces. Wells's insulation recommendations increase as the depth of the soil decreases.

At present, Michael Reynolds is building a worldwide network of communities, focused on spreading the technique of building earthships and doubling as a presentation. The communities consist of housing developments in Taos, New Mexico, uniquely constructed of earthships. Communities include REACH and STAR.[10]

Earthships are being built around the world, see here