From Appropedia
Redirected from Queensland 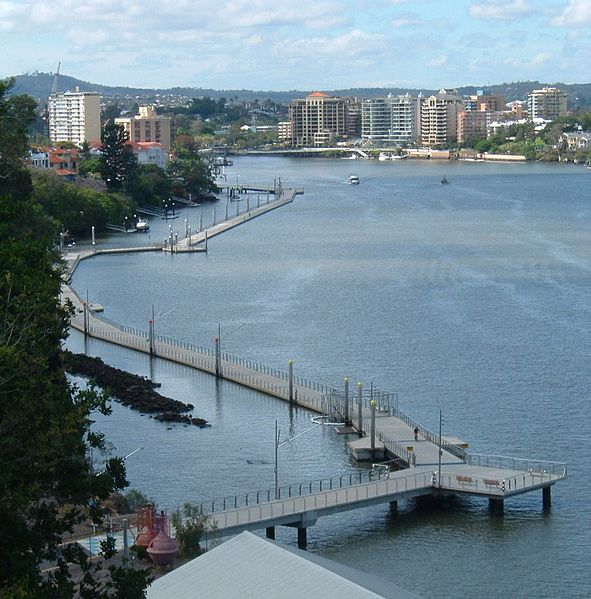 Queensland (locally , KWEENZ-land) is a state situated in northeastern Australia, the second-largest and third-most populous Australian state. It is bordered by the Northern Territory, South Australia and New South Wales to the west, southwest and south respectively. To the east, Queensland is bordered by the Coral Sea and the Pacific Ocean. To its north is the Torres Strait, separating the Australian mainland from Papua New Guinea. With an area of 1,852,642 square kilometres (715,309 sq mi), Queensland is the world's sixth-largest sub-national entity; it is larger than all but 15 countries. Due to its size, Queensland's geographical features and climates are diverse, including tropical rainforests, rivers, coral reefs, mountain ranges and sandy beaches in its tropical and sub-tropical coastal regions, as well as deserts and savanna in the semi-arid and desert climatic regions of its interior.

Queensland has a population of over 5.2 million, concentrated along the coast and particularly in South East Queensland. The capital and largest city in the state is Brisbane, Australia's third-largest city. Ten of Australia's thirty largest cities are located in Queensland, with the largest outside Brisbane being the Gold Coast, the Sunshine Coast, Townsville, Cairns, Ipswich, and Toowoomba. The state's population is multicultural, with 28.9% of inhabitants being immigrants.

From Wikipedia:Geography of Queensland § Protected areas

Queensland contains significant areas of rainforest and other areas of biological diversity. World Heritage Areas include the Great Barrier Reef, Wet Tropics of Queensland and Gondwana Rainforests of Australia. Queensland has 226 national parks. The largest is Simpson Desert National Park in the remote central west of the state. The most visited national parks in South East Queensland are Tamborine National Park, Lamington National Park and Noosa National Park. These parks are located near centres of major population and are the most accessible in the state. Lamington and other parks around the Scenic Rim such as Main Range National Park, are included in the World Heritage listed Gondwana Rainforests of Australia. 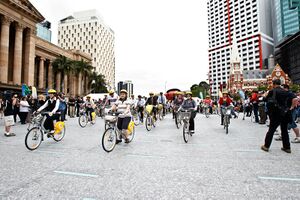 From Wikipedia:Transport in Brisbane § Cycling

Brisbane is constructing a number of cycle routes and dedicated, off-road bikeways. The South-East Bikeway is a bicycle only bikeway running adjacent to the South East Freeway. It empties onto the Goodwill Bridge at South Bank, which in turn, connects with the Bicentennial Bikeway underneath the Riverside Expressway. The Bicentennial Bikeway continues along the Brisbane River to Toowong.

A limited number of buses used to carry cycle racks on the front but this service is no longer available. Bicycles are easy to transport on the CityCats, and many stops have bicycle racks. During peak hour, bicycles on Queensland Rail's (QR) City network services are restricted to counter-peak-flow services (i.e. You have to be travelling away from the city in the morning, and to the city in the afternoon). Exceptions to this are relatively uncommon such as fold up bicycles fitting within certain dimensions. Riding a bicycle on QR property is always forbidden.

A bike station in the King George Square busway station offers many amenities including showers and locker rooms for members. Subscriptions for a Velib style community bike hire scheme called CityCycle by JCDecaux for Brisbane started on 1 September 2010 with bikes available from 1 October 2010 at 150 stations from the University of Queensland to Teneriffe. Due to declining numbers, this service is now discontinued, with JCDecaux being ordered to dismantle and remove all CityCycle docks and bikes. These will eventually be replaced with 2000 electric bikes by the Brisbane City Council. 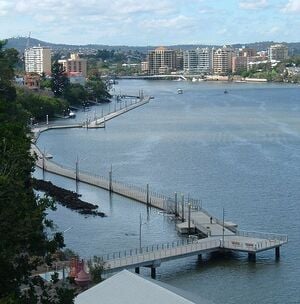 From Wikipedia:Transport in Brisbane § Brisbane Riverwalk

From Wikipedia:Transport in Brisbane § Buses

Brisbane has a large dedicated bus rapid transit network, the Brisbane busway network. The bus network comprises over 400 routes and 10,000 stations. Buses are channeled into the central business district and surrounds via the South East Busway, the Northern Busway and the Eastern Busway. The main network hubs are the King George Square, Queen Street, and Roma Street busway stations.

Solar has won. Even if coal were free to burn, power stations couldn't compete, July 7 [2]

Page data
Retrieved from "https://www.appropedia.org/w/index.php?title=Queensland_community_action&oldid=641744"
Cookies help us deliver our services. By using our services, you agree to our use of cookies.
Categories:
Maintenance categories:
Comments
Privacy policy · About Appropedia · Disclaimers · Mobile view · Content is available under CC-BY-SA-4.0 unless otherwise noted.
</html