This page contains a majority of the PET crystallinity research which was examined in the PET Extrusion literature review, and in the PET preparation protocol

PET should be in a crystalline form prior to drying, for retention of properties. This can apparently be done by agitating the material while it is being dried at around 180°F (82°C). [1] Other sources mention that slow cooling can promote crystallization[2][3]. It is recommended that PET be crystalline rather than amorphous during extrusion, to prevent the particles from binding together and clogging the extruder during glass transition. [4][5]

Collected PET DSC data shows that the walls of the bottles lack a crystalline transition peak, which could indicate that the plastic is already crystalline. 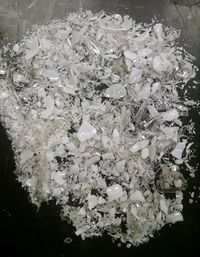 The opaque pieces are crystallized, while the clear are still amorphous. The whole sample was subject to 160°C.

Currently, the recommended method of doing this is to agitate and heat the amorphous shredded plastic at 180°F for around 1 hour [1]. This will increase the crystallinity of the plastic, and prepare it for drying, without sacrificing too much to degradation.

To quantitatively determine crystallinity, x-ray diffraction or differential scanning calorimetry can be used.

A heat gun has shown some success in inducing opacity for wall sections. The first setting caused no change but the second resulted in a warping of the PET, and eventual melting. After air cooling from the second level, pieces of the sample turned opaque, an indication that they were no longer biaxially-oriented, but oriented more from normal crystallization of the viscous flow. The temperatures for the first two levels of the heat gun were ~50°C, and ~280°C respectively. Cooling the plastic from the second level with water resulted in retention of the transparent properties however.

Important temperatures to be mindful of: 260°C is the melting point. 70-80°C is the glass transition temperature. The two tables presented here are for, what are believed to be mostly crystalline, and mostly amorphous PET. Newly shredded PET bottles are assumed to be amorphous. 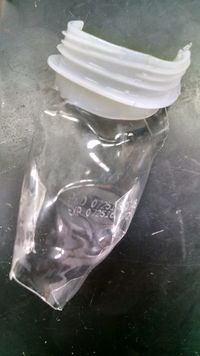 The opaque section likely has a lower degree of crystallinity, while the clear more so. The whole sample was heated to 140°C. Differences within the same part are due to processing history; the walls are blow-molded whilst the threads are injection-molded.

Page data
Retrieved from "https://www.appropedia.org/w/index.php?title=PET_Crystallinity&oldid=640993"
Cookies help us deliver our services. By using our services, you agree to our use of cookies.
Categories:
Maintenance categories:
Comments
Privacy policy · About Appropedia · Disclaimers · Mobile view · Content is available under CC-BY-SA-4.0 unless otherwise noted.
</html