From Appropedia
Redirected from Niue 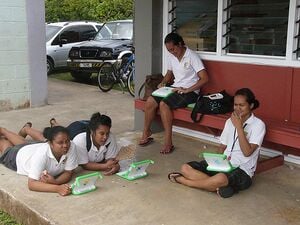 Niue (, ; Niuean: Niuē) is an island country in the South Pacific Ocean, 2,400 kilometres (1,500 mi) northeast of New Zealand. Niue's land area is about 261 square kilometres (101 sq mi) and its population, predominantly Polynesian, was about 1,600 in 2016. Niue is located in a triangle between Tonga, Samoa, and the Cook Islands. It is 604 kilometres northeast of Tonga. The island is commonly referred to as "The Rock", which comes from the traditional name "Rock of Polynesia". Niue is one of the world's largest coral islands. The terrain of the island has two noticeable levels. The higher level is made up of a limestone cliff running along the coast, with a plateau in the centre of the island reaching approximately 60 metres (200 feet) above sea level. The lower level is a coastal terrace approximately 0.5 km (0.3 miles) wide and about 25–27 metres (80–90 feet) high, which slopes down and meets the sea in small cliffs. A coral reef surrounds the island, with the only major break in the reef being in the central western coast, close to the capital, Alofi.

Niue is a self-governing state in free association with New Zealand, and New Zealand conducts most diplomatic relations on its behalf. As part of the Realm of New Zealand, Niueans are citizens of New Zealand and Charles III is Niue's head of state in his capacity as King of New Zealand. Between 90% and 95% of Niuean people live in New Zealand, along with about 70% of the speakers of the Niuean language. Niue is a bilingual country, with 30% of the population speaking both Niuean and English. The percentage of monolingual English-speaking people is only 11%, while 46% are monolingual Niuean speakers.

Niue is not a member of the United Nations (UN), but UN organisations have accepted its status as a freely associated state as equivalent to independence for the purposes of international law. As such, Niue is a member of some UN specialised agencies (such as UNESCO, and the WHO), and is invited, alongside the other non-UN member state, the Cook Islands, to attend United Nations conferences open to "all states". Niue has been a member of the Pacific Community since 1980.

2008: Niue is a particpant of the United Nations Environment Programme's Climate Neutral Network. Niue is hoping to become carbon neutral in the near future. Niue's own annual CO2 emissions are approximately 0.003 million metric tonnes for a population of about 1,700. The Government of Niue focuses in particular on the transport and energy sectors as the major contributors of greenhouse gas emissions. It promotes the use of energy saving appliances and compact fluorescent light bulbs, and, in the case of transport, enforces maximum speed limits and encourages carpooling. It also works to cut down carbon emissions through better waste management and harnessing renewable energy resources.[1]

In 2003, Niue became the world's first "Wi-Fi nation", in which free wireless Internet access is provided throughout the country by The Internet Users Society-Niue.[2]

Page data
Retrieved from "https://www.appropedia.org/w/index.php?title=Niue_community_action&oldid=668802"
Cookies help us deliver our services. By using our services, you agree to our use of cookies.
Categories:
About Appropedia · Policies · Contact · Content is available under CC-BY-SA-4.0 unless otherwise noted.