From Appropedia
Redirected from New Jersey 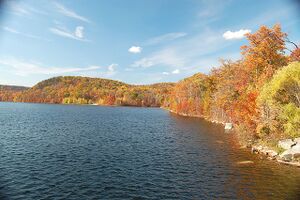 New Jersey is a state in the Mid-Atlantic and Northeastern regions of the United States. It is bordered on the north and east by the state of New York; on the east, southeast, and south by the Atlantic Ocean; on the west by the Delaware River and Pennsylvania; and on the southwest by Delaware Bay and the state of Delaware. At 7,354 square miles (19,050 km2), New Jersey is the fifth-smallest state in land area; but with close to 9.3 million residents, it ranks 11th in population and first in population density. The state capital is Trenton, and the most populous city is Newark. With the exception of Warren County, all of the state's 21 counties lie within the combined statistical areas of New York City or Philadelphia.

From Wikipedia:Citizens United to Protect the Maurice River and Its Tributaries, Inc.

Citizens United to Protect the Maurice River and Its Tributaries, Inc., or "CU", is a 501(c)(3) (nonprofit) regional watershed organization. It was founded in 1979 and incorporated in 1986.

CU received Environmental Quality Awards from the United States Environmental Protection Agency (EPA) in 1994 and again in 2000 for their efforts to procure the federal Wild and Scenic designation for the Maurice, Menantico, Manumuskin Rivers and the Muskee Creek. In the year 2000 CU was also acknowledged by the EPA for the work on an osprey colony, their annual raptor and waterfowl survey, the film “Down Jersey” and accompanying teachers’ guide, and the North American Wetlands Conservation Act.

In 2002 Citizens United to Protect the Maurice River and Its Tributaries, Inc. took first place in the category of Education and Learning Institute, NJ Department of Environmental Protection, Division of Watershed Management for their PBS film “Down Jersey” and the teachers’ curriculum, “Down Jersey: Celebrating Our Sense of Place.” Over 500 teachers have taken workshops in order to teach the curriculum.

CU also co-produced a documentary with New Jersey Network for which they received a Mid-Atlantic Emmy award for Outstanding Arts Program or Special.

From Wikipedia:Solar power in New Jersey

New Jersey has over 4,100 MW of install solar power capacity as of mid-2022, which provides 6.7% of the state's electricity consumption. The's state's growth of solar power is aided by a renewable portfolio standard that requires that 22.5% of New Jersey's electricity come from renewable resources by 2021, and by one of the most favorable net metering standards in the country, allowing customers of any size array to use net metering, although generation may not exceed annual demand. As of 2018, New Jersey has the sixth-largest installed solar capacity of all U.S. states and the largest installed solar capacity of the Northeastern States.

Wind power in New Jersey is in the early stages of development. There are various projects underway to create windfarms along coastal areas in the state on land, on piers, and on the continental shelf of the Atlantic Ocean off the southern Jersey Shore. In July 2021, the New Jersey Board of Public Utilities (BPU) approved two projects which would bring the state's committed windpower capacity to over 3,000 MW. W

Page data
Retrieved from "https://www.appropedia.org/w/index.php?title=New_Jersey_community_action&oldid=668095"
Cookies help us deliver our services. By using our services, you agree to our use of cookies.
Categories:
About Appropedia · Policies · Contact · Content is available under CC-BY-SA-4.0 unless otherwise noted.