From Appropedia
Redirected from Mozambique 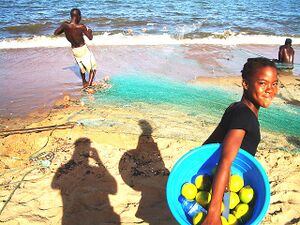 Mozambique (), officially the Republic of Mozambique (Portuguese: Moçambique or República de Moçambique, Portuguese pronunciation: [ʁɛˈpuβlikɐ ðɨ musɐ̃ˈbikɨ]; Chichewa: Mozambiki; Swahili: Msumbiji; Tsonga: Muzambhiki), is a country located in southeastern Africa bordered by the Indian Ocean to the east, Tanzania to the north, Malawi and Zambia to the northwest, Zimbabwe to the west, and Eswatini and South Africa to the southwest. The sovereign state is separated from the Comoros, Mayotte and Madagascar by the Mozambique Channel to the east. The capital and largest city is Maputo.

From Wikipedia:Wildlife of Mozambique § Protected areas

Mozambique has seven national parks, two of which are largely marine, and six national reserves. Additionally, there are several other protected areas, three community wildlife utilisation areas, various wildlife utilisation areas and forest reserves. In reality, many of these have little protection and many animals were severely depleted as a result of the Mozambican Civil War (1977–1992) and the increase in poaching which took place at that time. More recently, efforts are being made to restock some of the protected areas with animals brought in from elsewhere, and facilities for visitors have improved, particularly at Gorongosa National Park.

Gorongosa National Park is at the southern end of the Great African Rift Valley in the heart of central Mozambique, Southeast Africa. The more than 4,000 square kilometres (1,500 sq mi) park comprises the valley floor and parts of surrounding plateaus. Rivers originating on nearby Mount Gorongosa (1,863 m (6,112 ft)) water the plain.

Seasonal flooding and waterlogging of the valley, which is composed of a mosaic of soil types, creates a variety of distinct ecosystems. Grasslands are dotted with patches of acacia trees, savannah, dry forest on sands and seasonally rain-filled pans, and termite hill thickets. The plateaus contain miombo and montane forests and a spectacular rain forest at the base of a series of limestone gorges.

This combination of unique features at one time supported some of the densest wildlife populations in all of Africa, including charismatic carnivores, herbivores, and over 500 bird species. But large mammal numbers were reduced by as much as 95% and ecosystems were stressed during Mozambique's long civil conflict at the end of the 20th century.

The Carr Foundation/Gorongosa Restoration Project, a U.S. non-profit organization, has teamed with the Government of Mozambique to protect and restore the ecosystem of Gorongosa National Park and to develop an ecotourism industry to benefit local communities.

According to the 2009 Human Development Report of the United Nations Development Programme, about 55 percent of the population of Mozambique is living in poverty, nearly half is illiterate, 40 percent is undernourished, only 47 percent have access to safe water, and there is a standing life expectancy at birth of only 48 years. Mozambique ranked 165th out of 169 countries in the human development index. Much of this is a result of the food insecurity in the country.

With more than 80 percent of its population dependent on agriculture for livelihood, Mozambique’s food security can be extremely volatile. 90% of the land is made up of farms of 10 hectares (25 acres) or less.

Mozambique is particularly vulnerable to natural disasters such as droughts and floods, with a total of 15 over the last 25 years. These events greatly damaged the rural sector and the country’s overall economy. For example, the floods of 2000 affected some 2 million people, while the droughts of 1994 and 1996 affected 1.5 million people in the southern and central parts of the country.

The poor are particularly vulnerable to weather-induced risks simply by virtue of their poverty. Poor households have few assets to sell and their consumption is already low, so in times of scarcity they do not have much to buffer them from food insecurity. Most households have little income or real food security, and women-headed households have even less.

"The clean energy initiative". This project aims to provide rural electrification using sustainable energy, generating local employment and promoting entrepreneurial skills, by offering capacity building in the manufacture, installation and maintenance of micro wind turbines. The partners of this project are local small businesses and an academic institution.