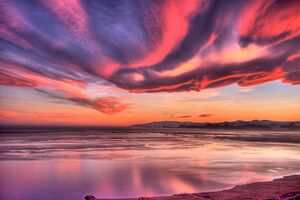 Iceland (Icelandic: Ísland; [ˈiːstlant] (listen)) is a Nordic island country in the North Atlantic Ocean and in the Arctic Ocean. Iceland is the most sparsely populated country in Europe. Iceland's capital and largest city is Reykjavík, which (along with its surrounding areas) is home to over 65% of the population. Iceland is the biggest part of the Mid-Atlantic Ridge that rises above sea level, and its central volcanic plateau is erupting almost constantly. The interior consists of a plateau characterised by sand and lava fields, mountains, and glaciers, and many glacial rivers flow to the sea through the lowlands. Iceland is warmed by the Gulf Stream and has a temperate climate, despite a high latitude just outside the Arctic Circle. Its high latitude and marine influence keep summers chilly, and most of its islands have a polar climate.

Iceland maintains a Nordic social welfare system that provides universal health care and tertiary education for its citizens. Iceland ranks high in economic, democratic, social stability, and equality, ranking third in the world by median wealth per adult. In 2018, it was ranked as the sixth-most developed country in the world by the United Nations' Human Development Index, and it ranks first on the Global Peace Index. Iceland runs almost completely on renewable energy.

Iceland has a very low level of pollution, thanks to an overwhelming reliance on cleaner geothermal energy, a low population density, and a high level of environmental consciousness among citizens. According to an OECD assessment, the amount of toxic materials in the atmosphere is far lower than in any other industrialised country measured. W

The Citizens Foundation is a non-profit organization based in Reykjavík, Iceland and founded under Icelandic law. Its purpose is to promote electronic collaborative democracy around the globe and to develop the software needed for that purpose.

Its formation can be traced back to the Icelandic financial crash in 2008 when development of the software started although the Foundation itself wasn't formally founded until 2010. The main focus has been on developing a web based democracy tool called Open Active Democracy (OAD) which it uses for its democracy building projects which are: Better Reykjavík, Shadow Parliament (Iceland only) and the international project Your Priorities.

Iceland is a world leader in renewable energy. 100% of Iceland's electricity grid is produced from renewable resources. In terms of total energy supply, 85% of the total primary energy supply in Iceland is derived from domestically produced renewable energy sources. Geothermal energy provided about 65% of primary energy in 2016, the share of hydropower was 20%, and the share of fossil fuels (mainly oil products for the transport sector) was 15%.

The Icelandic government aspires that the nation will be carbon neutral by 2040. The largest obstacles to this are road transport and the fishing industry.

In 2015, the total electricity consumption in Iceland was 18,798 GWh. Renewable energy provided almost 100% of production, with 75% coming from hydropower and 24% from geothermal power. Only two islands, Grimsey and Flatey, are not connected to the national grid and so rely primarily on diesel generators for electricity. Most of the hydropower plants are owned by Landsvirkjun (the National Power Company) which is the main supplier of electricity in Iceland. Landsvirkjun produces 12,469 GWh which is 75% of the total electricity production in Iceland.

Iceland is the world's largest green energy producer per capita and largest electricity producer per capita, with approximately 55,000 kWh per person per year. In comparison, the EU average is less than 6,000 kWh. Most of this electricity is used in energy-intensive industrial sectors, such as aluminium production, which developed in Iceland thanks to the low cost of electricity.

Iceland has a universal health care system that is administered by its Ministry of Welfare (Icelandic: Velferðarráðuneytið) and paid for mostly by taxes (85%) and to a lesser extent by service fees (15%). Unlike most countries, there are no private hospitals, and private insurance is practically nonexistent.

A considerable portion of the government budget is assigned to health care, and Iceland ranks 11th in health care expenditures as a percentage of GDP and 14th in spending per capita. Overall, the country's health care system is one of the best performing in the world, ranked 15th by the World Health Organization. According to an OECD report, Iceland devotes far more resources to healthcare than most industrialised nations. As of 2009, Iceland had 3.7 doctors per 1,000 people (compared with an average of 3.1 in OECD countries) and 15.3 nurses per 1,000 people (compared with an OECD average of 8.4).

Icelanders are among the world's healthiest people, with 81% reporting they are in good health, according to an OECD survey. Although it is a growing problem, obesity is not as prevalent as in other developed countries. Iceland has many campaigns for health and wellbeing, including the famous television show Lazytown, starring and created by former gymnastics champion Magnus Scheving. Infant mortality is one of the lowest in the world, and the proportion of the population that smokes is lower than the OECD average. Almost all women choose to terminate pregnancies of children with Down syndrome in Iceland. The average life expectancy is 81.8 (compared to an OECD average of 79.5), the fourth-highest in the world.

Icelanders are known for their strong sense of community and lack of social isolation: An OECD survey found that 98% believe they know someone they could rely on in a time of need, higher than in any other industrialised country. Similarly, only 6% reported "rarely" or "never" socialising with others. This high level of social cohesion is attributed to the small size and homogeneity of the population, as well as to a long history of harsh survival in an isolated environment, which reinforced the importance of unity and cooperation.

Egalitarianism is highly valued among the people of Iceland, with income inequality being among the lowest in the world. The constitution explicitly prohibits the enactment of noble privileges, titles, and ranks. Everyone is addressed by their first name. As in other Nordic countries, equality between the sexes is very high; Iceland is consistently ranked among the top three countries in the world for women to live in. W

Iceland puts well-being ahead of GDP in budget, Dec 3[2]

Page data
Retrieved from "https://www.appropedia.org/w/index.php?title=Iceland_community_action&oldid=668808"
Cookies help us deliver our services. By using our services, you agree to our use of cookies.
Categories:
About Appropedia · Policies · Contact · Content is available under CC-BY-SA-4.0 unless otherwise noted.