From Appropedia
Redirected from Ethiopia 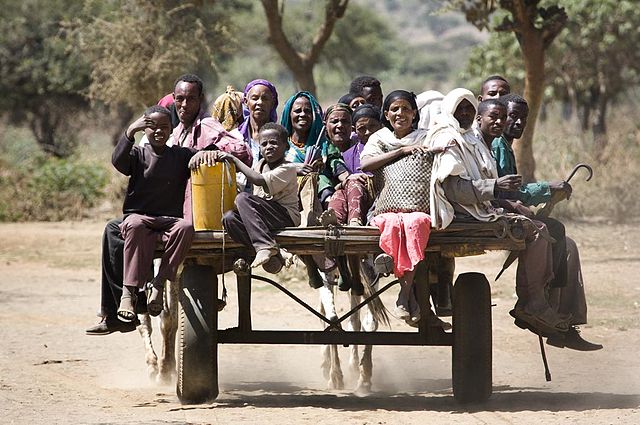 Ethiopia, officially the Federal Democratic Republic of Ethiopia, is a landlocked country in the Horn of Africa. It shares borders with Eritrea to the north, Djibouti to the northeast, Somalia to the east and northeast, Kenya to the south, South Sudan to the west, and Sudan to the northwest. Ethiopia has a total area of 1,100,000 square kilometres (420,000 square miles). As of 2022, it is home to around 113.5 million inhabitants, making it the 13th-most populous country in the world and the 2nd-most populous in Africa after Nigeria. The national capital and largest city, Addis Ababa, lies several kilometres west of the East African Rift that splits the country into the African and Somali tectonic plates.

Anatomically modern humans emerged from modern-day Ethiopia and set out to the Near East and elsewhere in the Middle Paleolithic period. Southwestern Ethiopia has been proposed as a possible homeland of the Afroasiatic language family. In 980 BCE, the Kingdom of D'mt extended its realm over Eritrea and the northern region of Ethiopia, while the Kingdom of Aksum maintained a unified civilization in the region for 900 years. Christianity was embraced by the kingdom in 330, and Islam arrived by the first Hijra in 615. After the collapse of Aksum in 960, a variety of kingdoms, largely tribal confederations, existed in the land of Ethiopia. The Zagwe dynasty ruled the north-central parts until being overthrown by Yekuno Amlak in 1270, inaugurating the Ethiopian Empire and the Solomonic dynasty, claimed descent from the biblical Solomon and Queen of Sheba under their son Menelik I. By the 14th century, the empire grew in prestige through territorial expansion and fighting against adjacent territories; most notably, the Ethiopian–Adal War (1529–1543) contributed to fragmentation of the empire, which ultimately fell under a decentralization known as Zemene Mesafint in the mid-18th century. Emperor Tewodros II ended Zemene Mesafint at the beginning of his reign in 1855, marking the reunification and modernization of Ethiopia.

"Gibe III dam will be a disaster of cataclysmic proportions for the tribes of the Omo valley",[7] March 23

Ethiopia was the first African country to join the Climate Neutral Network. While the nation is not a net contributor to global greenhouse gas emissions, it has expressed its commitment to mitigating climate change.

Ethiopia is an active supporter of UNEP's Billion Tree Campaign, contributing more trees than any other nation - over one billion - towards the global target of planting seven billion trees by the crucial UN climate change conference in December 2009. Furthermore, through Ethiopian Electric Power Corporation, the Government is distributing 5.4 million compact fluorescent lamps (CFLs) - commonly known as "energy savers" - country-wide to help consumers save money on electricity bills and reduce their carbon footprint.[8] June 5

As in many neighboring countries, most environmental issues in Ethiopia relate to deforestation and endangered species.

From Wikipedia:Environmental issues in Ethiopia

From Wikipedia:Environmental issues in Ethiopia § Deforestation

In the 1970s and 1980s, Ethiopia experienced civil war and communist purges which hindered its economy but it has since recovered and, as of 2010, has the largest economy by GDP in East Africa. However, it remains one of the world's poorest countries, facing poverty, hunger, corruption, weak infrastructure, poor respect for human rights, and limited access to health and education, with a literacy rate of only 49%, ranking it in the worst quartile on the Human Development Index. W

Migration to urban areas is usually motivated by the hope of better lives. In peasant associations daily life is a struggle to survive. About 16% of the population in Ethiopia lives on less than one dollar per day (2008). Only 65% of rural households in Ethiopia consume the World Health Organization's (WHO's) minimum standard of food per day (2,200 kilocalories), with 42% of children under 5 years old being underweight.

Most poor families (75%) share their sleeping quarters with livestock, and 40% of children sleep on the floor, where nighttime temperatures average 5 degrees Celsius in the cold season. The average family size is six or seven, living in a 30 square metre mud and thatch hut, with less than two hectares of land to cultivate.

The peasant associations face a cycle of poverty. Since the landholdings are so small, farmers cannot allow the land to lie fallow, which reduces soil fertility. This land degradation reduces the production of fodder for livestock, which causes low milk yields. Since the community burns livestock manure as fuel, rather than plowing the nutrients back into the land, the crop production is reduced. The low productivity of agriculture leads to inadequate incomes for farmers, hunger, malnutrition and disease. These unhealthy farmers have difficulty working the land and the productivity drops further.

Although conditions are drastically better in cities, all of Ethiopia suffers from poverty and poor sanitation. However, poverty in Ethiopia fell from 44% to 29.6% during 2000–2011, according to the World Bank. In the capital city of Addis Ababa, 55% of the population used to live in slums. Now, however, a construction boom in both the private and the public sector has led to a dramatic improvement in living standards in major cities, particularly in Addis Ababa. Notably, government-built condominium housing complexes have sprung up throughout the city, benefiting close to 600,000 individuals. Sanitation is the most pressing need in the city, with most of the population lacking access to waste treatment facilities. This contributes to the spread of illness through unhealthy water.

Despite the living conditions in the cities, the people of Addis Ababa are much better off than people living in the peasant associations owing to their educational opportunities. Unlike rural children, 69% of urban children are enrolled in primary school, and 35% of those are eligible to attend secondary school. Addis Ababa has its own university as well as many other secondary schools. The literacy rate is 82%.

Many NGOs (Non-Governmental Organizations) are working to solve this problem; however, most are far apart, uncoordinated, and working in isolation. The Sub-Saharan Africa NGO Consortium is attempting to coordinate efforts.

From Wikipedia:Ethiopia § Rural and urban life
Community Action for Sustainability

Page data
Retrieved from "https://www.appropedia.org/w/index.php?title=Ethiopia_community_action&oldid=658689"
Cookies help us deliver our services. By using our services, you agree to our use of cookies.
Categories:
Maintenance categories:
About Appropedia · Policies · Contact · Content is available under CC-BY-SA-4.0 unless otherwise noted.