From Appropedia
Redirected from Delaware 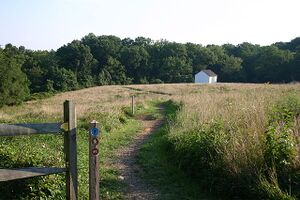 Delaware ( (listen) DEL-ə-wair) is a state in the Mid-Atlantic region of the United States, bordering Maryland to its south and west; Pennsylvania to its north; and New Jersey and the Atlantic Ocean to its east. The state takes its name from the adjacent Delaware Bay, in turn named after Thomas West, 3rd Baron De La Warr, an English nobleman and Virginia's first colonial governor.

Delaware occupies the northeastern portion of the Delmarva Peninsula and some islands and territory within the Delaware River. It is the second-smallest and sixth-least populous state, but also the sixth-most densely populated. Delaware's largest city is Wilmington, while the state capital is Dover, the second-largest city in the state. The state is divided into three counties, having the lowest number of counties of any state; from north to south, they are New Castle County, Kent County, and Sussex County. While the southern two counties have historically been predominantly agricultural, New Castle is more urbanized, being part of the Delaware Valley Metropolitan Statistical Area centered on Philadelphia. Although included in the Southern United States by the Census Bureau, Delaware's geography, culture, and history combine elements of the Mid-Atlantic and Northeastern regions of the country.

In December 2019, Delaware joined consideration for a multi-state gasoline cap-and-trade program. The plan aims to reduce transportation-related tailpipe emissions, and would levy a tax on fuel companies based on carbon dioxide emissions. The most ambitious version of the plan is projected to reduce the area's tailpipe emissions by 25% between 2022 and 2032. The program is in the public comment phase, with individual states determining whether to participate. The program could begin as early as 2022.

According to the United States Environmental Protection Agency, "Delaware's climate is changing. The state has warmed two degrees (F) in the last century, heavy rainstorms are more frequent, and the sea is rising about one inch every seven years. Higher water levels are eroding beaches, submerging low lands, exacerbating coastal flooding, and increasing the salinity of estuaries and aquifers. In the coming decades, changing the climate is likely to increase coastal flooding; harm marine, wetland, and inland ecosystems; disrupt farming; and increase some risks to human health". W

Delaware provides government subsidy support for the clean-up of property "lightly contaminated" by hazardous waste, the proceeds for which come from a tax on wholesale petroleum sales.

The Delaware River has been attached to areas of high pollution. The Delaware River in 2012 was named the 5th most polluted river in the United States, explained by PennEnvironment and Environment New Jersey. The activist groups claim that there is about 7–10 million pounds of toxic chemicals flowing through the waterways due to dumping by DuPont Chambers Works. PennEnvironment also claims that the pollutants in the river can cause birth defects, infertility among women, and have been linked to cancer.

In 2015, the EPA saw the Delaware River as a concern for mass pollution especially in the Greater Philadelphia and Chester, Pennsylvania area. The EPA was involved after accusations that the river met standards made illegal by the Clean Water Act. In complying with the Clean Water Act, the EPA involved the Delaware County Regional Water Authority (DELCORA) where they set up a plan to spend around $200 million to help rid the waterway of about 740 million gallons of sewage and pollution. DELCORA was also fined about $1.4 million for allowing the Delaware River to have so much pollution residing in the river in the first place and for not complying with the Clean Water Act.

The Clean Water Act explains the importance of low pollution for human and species health. One of the sectors in the Clean Water Act explains how conditions of the river should be stable enough for human fishing and swimming. Even though the river has had success with the cleanup of pollution, the Delaware River still does not meet that standard of swimmable or fishable conditions in the Philadelphia/ Chester region.

From Wikipedia:Solar power in Delaware

Solar power in Delaware is small industry. Delaware had 150 MW of total installed capacity in 2020. The largest solar farms in the state included the 10 MW Dover Sun Park and the 12 MW Milford Solar Farm.

The expansion of Bruce A. Henry Solar Farm near Georgetown in Sussex County from 23 to 40 acres was completed in 2020.

Page data
Retrieved from "https://www.appropedia.org/w/index.php?title=Delaware_community_action&oldid=667941"
Cookies help us deliver our services. By using our services, you agree to our use of cookies.
Categories:
About Appropedia · Policies · Contact · Content is available under CC-BY-SA-4.0 unless otherwise noted.