From Appropedia
Redirected from Croydon 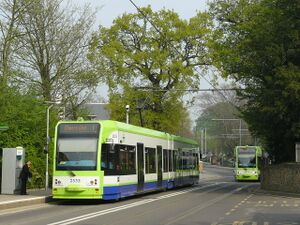 The London Borough of Croydon (pronunciation ) is a London borough in south London, part of Outer London. It covers an area of 87 km2 (33.6 sq mi). It is the southernmost borough of London. At its centre is the historic town of Croydon from which the borough takes its name; while other urban centres include Coulsdon, Purley, South Norwood, Norbury, New Addington and Thornton Heath. Croydon is mentioned in Domesday Book, and from a small market town has expanded into one of the most populous areas on the fringe of London. The borough is now one of London's leading business, financial and cultural centres, and its influence in entertainment and the arts contribute to its status as a major metropolitan centre. Its population is 386,710, making it the second largest London borough and fifteenth largest English district.

From Wikipedia:Parks and open spaces in the London Borough of Croydon

The London Borough of Croydon has over 120 parks and open spaces within its boundaries, ranging from the 200 acre (80ha) Selsdon Wood Nature Reserve to many recreation grounds and sports fields scattered throughout the Borough. Croydon covers an area of 86.52 km², the 256th largest district in England. Croydon's physical features consist of many hills and rivers that are spread out across the borough and into the North Downs, Surrey and the rest of South London. Some of the open spaces in Croydon form part of the well-known London LOOP walks where the first section was opened on 3 May 1996 with a ceremony on Farthing Downs in Coulsdon. As a borough in Outer London it also contains some open countryside in the form of country parks. Croydon Council is associated with several other boroughs who are taking part in the Downlands Countryside Management Project. These boroughs are Sutton; and by Surrey County Council; the City of London Corporation; the Surrey districts of Reigate and Banstead and Tandridge; and the Countryside Agency. An additional partner is Natural Britain.

Duppas Hill was Croydon's first public recreation ground, bought by the Board of Health in 1865. Addington Hills is a major floodplain in London for the Thames Valley and is recognised as a significant obstacle to the growth of London from its origins as a port on the north side of the river, to a large circular city. Mitcham Common also forms part of the borough although it is only partly in Croydon, the London Borough of Merton has the dominant half of the common, while Sutton make up most of the south side.

The Queen's Gardens, Park Hill and Norwood Grove are examples of ornamental gardens in the Borough.

There are also many recreation grounds such as the one in South Norwood which is currently undergoing major refurbishment works. Examples of meadows include Heavers Meadow and Brickfields Meadow both located in South Norwood.

Although hilly, Croydon is compact and has few major trunk roads running through it. It is on one of the Connect2 schemes which are part of the National Cycle Network route running around Croydon. The North Downs, an area of outstanding natural beauty popular with both on- and off-road cyclists, is so close to Croydon that part of the park lies within the borough boundary, and there are routes into the park almost from the civic centre. W

Waterlink Way is a cyclepath and walking route in South East London. It extends from South Norwood Country Park (near Elmers End station) to the Cutty Sark ship in Greenwich, a total of eight miles.

The Waterlink Way connects a number of parks and green spaces in South East London – including Ladywell Fields and Brookmill Park – while following the Pool and Ravensbourne rivers. The route was designed to be accessible, with a large number of railway stations including Kent House, Lower Sydenham, Ladywell, Lewisham and Greenwich en route.

Tramlink, previously Croydon Tramlink, is a light rail tram system serving Croydon and surrounding areas in south London, England. It began operation in 2000, the first tram system in London since 1952.

The network consists of 39 stops along 28 km (17 mi) of track, on a mixture of street track shared with other traffic, dedicated track in public roads, and off-street track consisting of new rights-of-way, former railway lines, and one right-of-way where the Tramlink track runs parallel to a third rail-electrified Network Rail line. W

The Wandle Trail is a 12.5-mile (20 km) walking and cycling trail that follows the River Wandle from Croydon to Wandsworth in south-west London

Lots of happy talk as residents do the Sensible thing, February 18[4]

Page data
Retrieved from "https://www.appropedia.org/w/index.php?title=Croydon_community_action&oldid=665899"
Cookies help us deliver our services. By using our services, you agree to our use of cookies.
Categories:
About Appropedia · Policies · Contact · Content is available under CC-BY-SA-4.0 unless otherwise noted.