From Appropedia
Redirected from Barbados 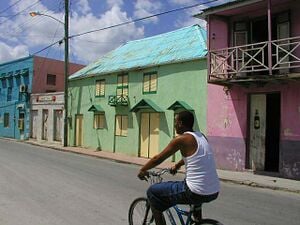 Barbados is an island country in the Lesser Antilles of the West Indies, in the Caribbean region of the Americas, and the most easterly of the Caribbean Islands. It occupies an area of 432 km2 (167 sq mi) and has a population of about 287,000 (2019 estimate). Its capital and largest city is Bridgetown.

Inhabited by Kalinago people since the 13th century, and prior to that by other Amerindians, Spanish navigators took possession of Barbados in the late 15th century, claiming it for the Crown of Castile. It first appeared on a Spanish map in 1511. The Portuguese Empire claimed the island between 1532 and 1536, but abandoned it in 1620 with their only remnants being an introduction of wild boars for a good supply of meat whenever the island was visited. An English ship, the Olive Blossom, arrived in Barbados on 14 May 1625; its men took possession of the island in the name of King James I. In 1627, the first permanent settlers arrived from England, and Barbados became an English and later British colony. During this period, the colony operated on a plantation economy, relying on the labour of enslaved Africans who worked on the island's plantations. The slave trade to the island continued until it was outlawed by the imperial crown's signed Slave Trade Act 1807, with final emancipation of the enslaved population in Barbados occurring over a period of five years following the Slavery Abolition Act 1833.

The Barbados Wildlife Reserve is located in the parish of Saint Peter, Barbados. It occupies four acres of mahogany forest near the top of Farley Hill, next to Grenade Hall Signal Station and Forest.

It was established by Canadian primatologist Jean Baulu and his wife, Suzanne. They first founded the Barbados Primate Research Centre on the site in 1982, for the conservation and study of green monkeys, which were brought to Barbados in the 17th century and are now widespread on the island. It was expanded into a wildlife reserve in 1985, with funding from the Canadian International Development Agency.

In addition to the green monkeys, which roam freely in and out of the fenced enclosure, the wildlife reserve also keeps a variety of other animals, many of which roam the reserve freely without separation from visitors. These include red brockets, red-footed tortoises, Patagonian maras, Cuban rock iguanas, and numerous caged tropical birds.

The buildings in the wildlife reserve are all constructed from coral rock, excavated from nearby sugarcane fields. All of the bricks that form its paths were recycled from sugar factories.

No excuse for not recycling In Barbados, [2] July 21

Barbados is susceptible to environmental pressures. As one of the world's most densely populated isles, the government worked during the 1990s to aggressively integrate the growing south coast of the island into the Bridgetown Sewage Treatment Plant to reduce contamination of offshore coral reefs. As of the first decade of the 21st century, a second treatment plant has been proposed along the island's west coast. Being so densely populated, Barbados has made great efforts to protect its underground aquifers.

As a coral-limestone island, Barbados is highly permeable to seepage of surface water into the earth. The government has placed great emphasis on protecting the catchment areas that lead directly into the huge network of underground aquifers and streams. On occasion illegal squatters have breached these areas, and the government has removed squatters to preserve the cleanliness of the underground springs which provide the island's drinking water.

The government has placed a huge emphasis on keeping Barbados clean with the aim of protecting the environment and preserving offshore coral reefs which surround the island. Many initiatives to mitigate human pressures on the coastal regions of Barbados and seas come from the Coastal Zone Management Unit (CZMU). Barbados has nearly 90 kilometres (56 miles) of coral reefs just offshore and two protected marine parks have been established off the west coast. Overfishing is another threat which faces Barbados.

Although on the opposite side of the Atlantic, and some 4,800 kilometres (3,000 miles) west of Africa, Barbados is one of many places in the American continent that experience heightened levels of mineral dust from the Sahara Desert. Some particularly intense dust episodes have been blamed partly for the impacts on the health of coral reefs surrounding Barbados or asthmatic episodes, but evidence has not wholly supported the former claim.