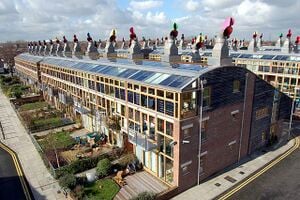 The Borough has some of the schools with the best results in the country. A Trust for London and New Policy Institute report noted that Sutton had the highest rate in London of pupils achieving 5 A* – C GCSEs. In December 2014 Sutton was described by a senior Government official as the most "normal place in Britain". In connection with this, the leader of Sutton Council described the borough as "quietly brilliant", and noted that 91% of residents say it is "a great place to live".

Low levels of recorded crime are a feature of the borough, being among the lowest in London. An Ipsos MORI poll in 2014 found that 97% of residents felt safe in the borough during the day, and 71% felt safe at night, a higher figure than in 2011.

The 2014 Family Hotspots Report, on the best places in England and Wales for families to live, placed three areas within the borough among the top 10 places in London. The areas were identified as postcodes SM1, SM2 (Sutton town) and SM3 (Cheam). A Rightmove study in 2015 found that Sutton was the fourth happiest borough in which to live out of 33 in London. It achieved the same placing in the 2016 survey.

In 2014, a survey by eMoov (Property Hot Spot Index) found Sutton to be the easiest place in the country in which to sell a property. It was shown in a national detailed Land Use Survey by the Office for National Statistics in 2005 that the London Borough of Sutton had the highest proportion of land taken up by gardens, 35.1%, of any district in England.

The London Borough of Sutton was one of the four "vanguard areas" selected in 2010 for the Big Society initiative.

From Wikipedia:Parks and open spaces in the London Borough of Sutton

The London Borough of Sutton, one of the peripheral London boroughs, has 89 parks and open spaces within its boundaries, a total area of 1500 acres (6 km2). Varied in size and layout, green spaces range from the compact Manor Park in Sutton town centre, through the medium-sized Grove Park, which forms part of the Carshalton Village conservation area, to the large and historic Oaks Park in the south of the borough. In the west of the borough is the large Nonsuch Park.

Sutton Ecology Centre Grounds is a 1.3 hectare Local Nature Reserve and Site of Borough Importance for Nature Conservation, Grade 1, in Carshalton in the London Borough of Sutton. It is owned by Sutton Council and managed by the Council together with the Friends of Sutton Ecology Centre.

The area was recorded as an orchard called Cook's Orchard from 1590. In the eighteenth century it was the kitchen garden for Stone Court, which was demolished in about 1800. The grounds also include The Old Rectory, built in the early eighteenth century. The Ecology Centre opened in 1989.

Habitats include ponds, woodland, meadows, marshlands. There are also small demonstration gardens. In the south is the old course of the River Wandle, which in now dry most of the time, but still has yellow flag iris. Margaret's Pool has a number of species of dragonfly and damselfly, and the trees surrounding it are sycamore and ash.

Manor Park is a public park in the town of Sutton in Greater London. The current Manor Park Café opened in October 2010. This eco-friendly, thirty-seat café has a range of environmental features, including its straw-bale construction. It was erected using UK produced straw-bales and natural sustainable materials, giving the building a potential lifespan of over 200 years. It was London’s first energy-efficient building to use this method of construction. W

Arts Network Sutton "promotes, champions, nurtures and acts as a voice for the arts" in the borough. Taking over from the former Sutton Arts Council, it was put in place in April 2014, and launched by the Mayor of Sutton in June. It co-ordinates the arts locally and works together with regional and national arts bodies, informs the local arts community about arts initiatives,seeks out funding for local projects and runs events.

From Wikipedia:London Borough of Sutton § Cycling

Although hilly, Sutton is compact and has few major trunk roads running through it. It is on one of the National Cycle Network routes running around South London. The nearby North Downs to the south, part of which falls within the borough boundary, is an area of outstanding natural beauty popular with both on and off-road cyclists.

Sutton Community Farm, the only one of its kind in London, is located in the Wallington part of the borough. A not-for-profit social enterprise, it occupies a 7.5 acre small-holding of a type originally given to ex-servicemen following the First World War. W

The London Borough of Sutton has provided funding to grow the green economy by creating a low carbon cluster of green businesses. The project includes the establishment of a "Green Business Network", the provision of training, and the creation of employment opportunities for assessors, surveyors, designers and installers. W

The Environmental Fair is held in Carshalton Park on August Bank Holiday Monday. It features over 100 stalls and showcases local sustainability initiatives. It also includes music, performing art, poetry, children's activities, campaign groups, local craft, interactive demonstrations, and a farmers' market. Music is performed from three stages and across the genres from rock to folk. The main stage is a natural open-air amphitheatre. There is food and a bar with real ales. The fair attracts on average around 10,000 people. It is organised by EcoLocal with a team of volunteers. W

The Sutton Life Centre is an £8 million community facility designed to improve life chances for younger people and encourage good citizenship. Its key feature – the lifezone – is a virtual street, a room with screens on all walls showing real-life scenes from Sutton's streets. It also has a library, a café, a climbing wall, and community, eco, sports, youth and media zones.[35] It tries to encourage community engagement and involvement. It was opened on 27 October 2010. W

The acclaimed BedZED (Beddington Zero Energy Development) housing complex is located on London Road, SM6, about 500 yards north of Hackbridge mainline railway station. It uses a number of innovative technologies to enable it to operate with zero energy use. It was designed by the architect Bill Dunster to support a more sustainable lifestyle. The project was led by the Peabody Trust in partnership with Bill Dunster Architects, Ellis & Moore Consulting Engineers, BioRegional, Arup and the cost consultants Gardiner and Theobald.

The 99 homes, and 1,405 square metres of work space were built between 2000 and 2002. It is the UK's largest and first carbon-neutral eco-community. The buildings are constructed of materials that store heat during warm conditions and release heat at cooler times, and where possible, they have been built from natural, recycled or reclaimed materials. The first residents moved in (to the Helios Road part of the development) during March 2002.

BedZED receives power from a small-scale combined heat and power plant (CHP). In conventional energy generation, the heat that is produced as a by-product of generating electricity is lost. With CHP technology, this heat can be harnessed and put to use. At BedZED, the heat from the CHP provides hot water, which is distributed around the site via a district heating system of super-insulated pipes. Should residents or workers require a heating boost, each home or office has a domestic hot water tank that doubles as a radiator.

The CHP plant at BedZED is powered by off-cuts from tree surgery waste that would otherwise go to landfill. Wood is a carbon neutral fuel because the CO2 released when the wood is burned is equal to that absorbed by the tree as it grew.

The development has attracted wide interest and acclaim over the past decade since it was built, and, has won numerous awards. Among other examples of recognition, it was shortlisted for the Stirling Prize for architecture in October 2003, and won awards from the London Evening Standard and RIBA in 2002. W