Photoluminescence (PL) Spectroscopy is a type of contactless and nondestructive probing method for determining the electronic structure of a sample. In PL Spectroscopy, a laser is fired at a sample and the resulting fluorescence is measured by a spectrometer. The measured fluorescence can be used to determine the band gap of a semiconductor sample, impurity levels and possible defects in the sample, and the recombination mechanisms within the sample [1]. The determination of the electronic band gap for a semiconductor is the primary focus of this work. 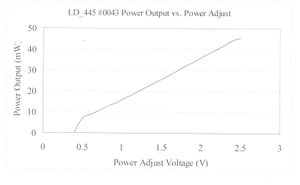 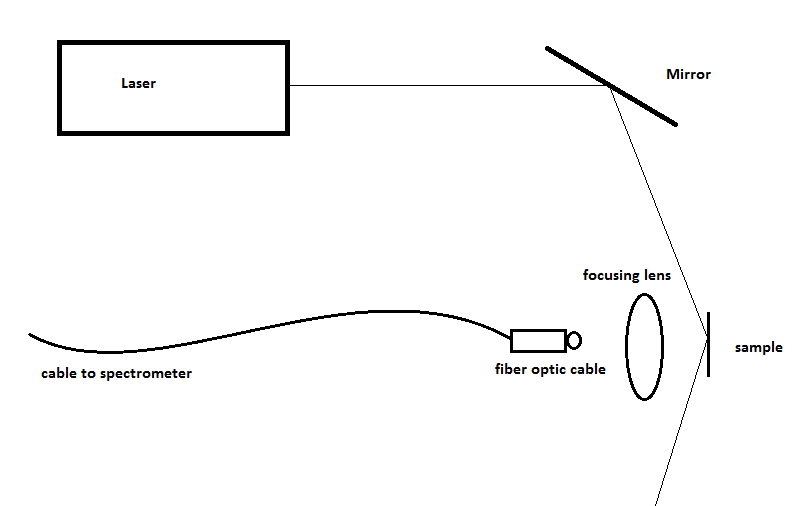 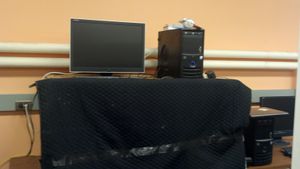 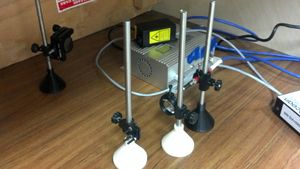 The first step to using of PL spectroscopy is to have a powerful enough laser to excite the electrons from the valence band to the conduction band for all the different samples you wish to examine. We used at 450 nm (2.755 eV) laser to test samples. This will only work for semiconductors with bandgaps smaller than 2.755eV. When choosing a laser, it is the wavelength that is important with intensity being a secondary concern since it is the wavelength that determines if the electrons jump the band gap.

The setup of the PL system was designed from two separate works from the University of Colorado [2] and from the University of Ohio [3]. While researching the design of a PL system, it became obvious that researchers in general do not share their exact PL system design. Both of the works feature explicit diagrams of their photoluminescence spectroscopy setups. This open source PL spectroscopy setup is largely based on their previous work.

Both of the setups from Colorado and OSU used a neutral density filter. We do not use one here because our laser has a variable intensity dial on it. The use of a mirror to bounce the laser onto the sample instead of direct illumination from the laser offers more flexibility. It is much easier to adjust the mirror than the laser. The laser is incident on the sample at a glancing angle so that specular reflection from the sample does not go near the fiber optic cable. This will reduce the laser signal read on the spectrometer and thus the noise. The spectrometer will still read some of the laser signal from diffuse reflection. The focusing lens is used to gather the fluorescence from the sample and focus it onto the fiber optic cable. Thus the fiber optic cable must be placed away from the lens at a distance equal to the focal length of the lens. The whole PL experiment is done within a dark box to limit the effect of outside light on the spectrometer.

The mirror, sample, lens, and fiber optic cable are held in place with open source optics holders, which can be printed on an open source 3D printer. These open source optic holders allow us greater flexibility of placement than an optical bread board or lab bench would. However, it does lower the overall stability of the system, but such fined tuned stability is not needed for a simple PL system like this.

There many improvements to this simple system that could be implemented. 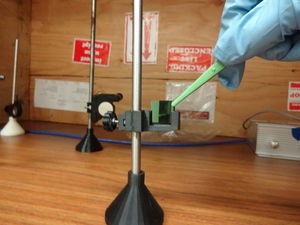 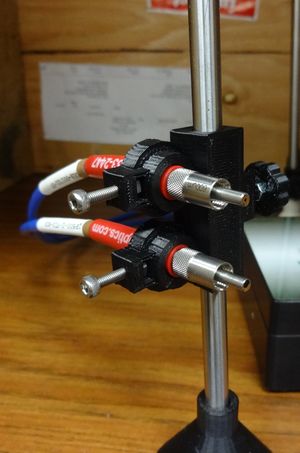 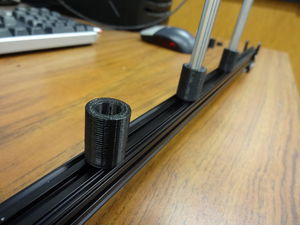 As part of the open source optics project we will be designing all of these components.

Page data
Retrieved from "https://www.appropedia.org/w/index.php?title=Open-source_photoluminescence_system&oldid=654196"
Cookies help us deliver our services. By using our services, you agree to our use of cookies.
Categories:
Maintenance categories:
Comments
Privacy policy · About Appropedia · Disclaimers · Mobile view · Content is available under CC-BY-SA-4.0 unless otherwise noted.
</html