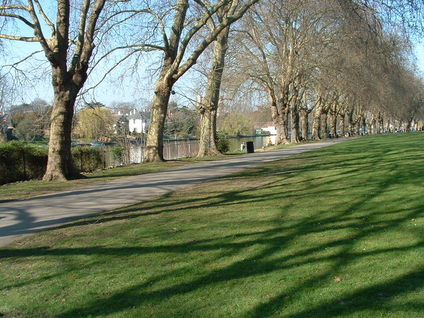 Kingston upon Thames (spelled with hyphens until 1965, and generally known locally as Kingston) is a town in Greater London, England, and within the historic county of Surrey. It is situated on the River Thames, about 33 feet (10 m) above sea level and 10 miles (16 km) southwest of Charing Cross (deemed the geographical centre of London). It is notable as the ancient market town in which Saxon kings were crowned and today is the administrative centre of the Royal Borough of Kingston upon Thames.

The large historic parish of Kingston became absorbed in modern times into the Municipal Borough of Kingston-upon-Thames, reformed in 1835 and from 1893 to 2021 was the location of Surrey County Council, extraterritorially in terms of local government administration since 1965, when Kingston became a part of Greater London.

Today, most of the town centre is part of the KT1 postcode area, but some areas north of Kingston railway station are within KT2. The United Kingdom Census 2011 recorded the population of the town (comprising the four wards of Canbury, Grove, Norbiton and Tudor) as 43,013, while the borough overall counted 175,470. Kingston is identified as a metropolitan centre in the London Plan and is today a major retail centre, one of the biggest in the UK, receiving 18 million visitors a year. It is also home to Kingston University.

Smart Communities, community action project all about saving energy in the home

From the Ground Up Kingston’s own organic veg and fruit box scheme that brings affordable fresh organic food to the Royal Borough of Kingston.

Wikipedia: Parks and open spaces in Kingston upon Thames (category)