From Appropedia
Redirected from Indiana 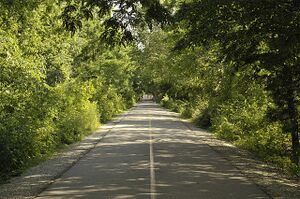 Indiana ( (listen)) is a U.S. state in the Midwestern United States. It is the 38th-largest by area and the 17th-most populous of the 50 States. Its capital and largest city is Indianapolis. Indiana was admitted to the United States as the 19th state on December 11, 1816. It is bordered by Lake Michigan to the northwest, Michigan to the north, Ohio to the east, the Ohio River and Kentucky to the south and southeast, and the Wabash River and Illinois to the west.

From Wikipedia:Climate change in Indiana § Climate organizations and resilience efforts

Earth Charter Indiana has worked to develop leadership in sustainability and climate action for almost 20 years. Its Youth Power Indiana initiative works with students in elementary through high school, and with mayors and municipal officials to develop sustainability and resiliency programs. Young people have advocated climate policy which has been adopted in seven cities: Carmel, Indianapolis, Lawrence, South Bend, Goshen, Bloomington and West Lafayette.

Indiana Project Drawdown has assembled information on hundreds of local groups in the state which are making progress on emissions reduction.

Publicly available data is available to communities and government via the Hoosier Resilience Index, an online database listing information such as "precipitation, flood plain and land use maps – for every community in the state of Indiana."

Carbon Neutral Indiana (CNI) is a non-profit organization that works with households, businesses, and academic institutions to measure, offset, and reduce their carbon footprint. Their goal is to spark a movement amongst Hoosiers to ensure Indiana becomes carbon neutral as soon as possible.

From Wikipedia:Climate change in Indiana

Climate change in Indiana encompasses the effects of climate change, attributed to man-made increases in atmospheric carbon dioxide, in the U.S. state of Indiana.

According to the United States Environmental Protection Agency, "Indiana's climate is changing. Most of the state has warmed about one degree (F) in the last century. Floods are becoming more frequent, and ice cover on the Great Lakes is forming later or melting sooner. In the coming decades, the state will have more extremely hot days, which may harm public health in urban areas and corn harvests in rural areas". In May 2019, The Kansas City Star noted that although it was not yet possible to say whether climate change was contributing to the increasing number of tornadoes in the region, "the band of states in the central United States ... that each spring are ravaged by hundreds of tornadoes — is not disappearing. But it seems to be expanding", resulting in a higher frequency of tornadoes in states including Indiana.

Indiana is one of the ten states that produce half of all greenhouse gas emissions in the US.

The Lilly Arbor Project is a part of an experimental riparian floodplain reforestation and ecological restoration program, located along the White River in Indianapolis, Indiana, in the eastern United States.

Since its founding in 1990, Sycamore has protected more than 9,000 acres of land on 100 parcels. Many of the properties that Sycamore owns outright have hiking trails and are open to the general public.

Sycamore has an active and award-winning Environmental Education Program that helps people in southern Indiana build an understanding of Indiana's natural heritage and the Earth's delicately balanced living systems. Sycamore believes that nature is the ultimate educator and offers lessons that reinforce school curriculum as well as program for families and the community.

From Wikipedia:Wind power in Indiana

Wind power in Indiana was limited to a few small water-pumping windmills on farms until 2008 with construction of Indiana's first utility-scale wind power facility, Goodland (phase I) with a nameplate capacity of 130 MW. As of September 2017, Indiana had a total of 1897 MW of wind power capacity installed, ranking it 12th among U.S. states. Wind power was responsible for 4.8% of in-state electricity production in 2016.

From Wikipedia:Solar power in Indiana

Solar power in Indiana has been growing in recent years due to new technological improvements and a variety of regulatory actions and financial incentives, particularly a 30% federal tax credit for any size project.

In 2015, Indiana ranked 18th among U.S. states for installed solar power with 136 MW of photovoltaic panels. An estimated 18% of electricity in Indiana could be provided by rooftop solar panels.

The Mammoth Solar project in Northwest Indiana broke ground in October 2021, and when complete it will be the largest solar project in the United States, with more than 2.8 million panels producing more than 1 gigawatt of power.

Merry Lea Environmental Learning Center of Goshen College is located just south of Wolf Lake at Bear Lake in Noble County, Indiana, United States. Merry Lea is the largest privately held land reserve in the state of Indiana. The center serves as a field laboratory for students at Goshen College who are studying ecology, environmental education and agroecology. In addition, Merry Lea provides environmental educational experiences for elementary students in the center's service area which includes the Fort Wayne metropolitan area as well as Warsaw, Huntington, Kendallville, Goshen and Elkhart.

The facility's 1,150 acres (4.6 km2) include most of northern Indiana's ecosystems including peat bogs, swamp maple forest, upland mesic forest, old field, prairie, and lakeshore. An esker deposit with 50 ft (15 m) relief that extends for nearly half a mile (1 km) is the most striking geological feature. The center also features Rieth Village, a complex of energy efficient buildings completed in 2006 that provide housing and classrooms for college students. Rieth Village features a 10 kW wind generator mounted on a 100 ft (30 m) tower and 4.8 kW photovoltaic array.

The Garden of Eatin

Energy Data & Statistics for Indiana, from the U.S. Department of Energy

Greenfield: Nonprofit farm seeks to feed those in need, March 10[3]

Page data
Retrieved from "https://www.appropedia.org/w/index.php?title=Indiana_community_action&oldid=667945"
Cookies help us deliver our services. By using our services, you agree to our use of cookies.
Categories:
About Appropedia · Policies · Contact · Content is available under CC-BY-SA-4.0 unless otherwise noted.