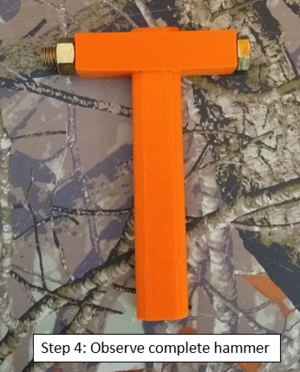 This is an improvement of a previous hammer design, which can be found here

In areas of the world with limited manufacturing capabilities and limited monetary resources, coming by basic hand tools can be more difficult than it is here in the US. This specific item is a hammer that can be 3D printed, with a bolt and nut(s) being used to assemble the parts as well as act as the striking surface and add weight to the hammer. Obviously, a fully 3D printed hammer is not a super realistic tool to produce with what is realistically available to most individuals around the world in terms of 3D printing outside of industrial settings. However, with the availability of printers that can at least print in PLA expanding with their costs falling, this is a more realistic way for anyone to produce a hammer.

Outside of being easier to access for resource deprived areas of the world, this could be used by anyone who may want a lot of different size hammers for a low price, I myself am going to be making several as the cost of filament is low, at 71 grams of filament used to produce my first one costing me ~$1.42 US to produce a larger size, using bolts that I already have laying around. With bolts/nuts being an extremely common fastener that literally holds a large part of the world we live in together, they should be fairly easy to come by almost anywhere and the SCAD code is written in terms of variables all commented at the top to allow for extremely easy adjustments of sizing to fit any use case.

This design was kept as simple as possible to ensure any level of printer can produce it with the minimal amount of material usage, reducing the size of the pla head that functionally only needs to locate the bolt also minimizes the change of tool failure due to a missed swing, as the head of the bolt covers most of the hammer head.

Source code and original STL's Are here at Thingiverse

Once again, this prototype was made using more expensive grade 8 hardware that is more than overkill for this, priced from one of the more expensive places to acquire hardware from, assuming a worst case scenario on cost.

Orient the parts as shown if printing both at once is a possibility on your printer to reduce time, the longer flat surfaces should be flat to the bed and the STL's should import in the correct orientation into CURA for printing separately, one part may need to be rotated to print together. It may take ~5.5 hours to print at 60% infill with both parts in one print, this time is subject to change based on final part sizing/infill & etc 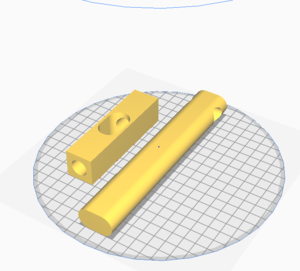 The next series of images contain assembly instructions, the assembly of this tool should be extremely straight forward and simple. 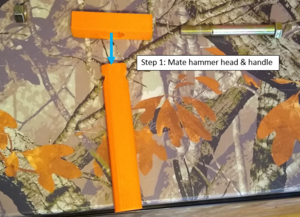 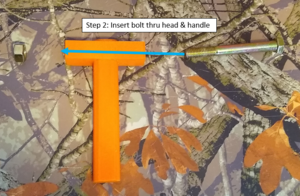 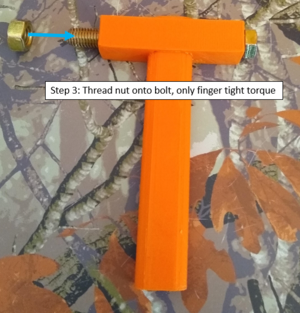 If all goes well, assembly should take less than a minute.