Green computing, or green information technology (IT), refers to environmentally sustainable computing. It is the study and practice of using computing resources efficiently by designing, manufacturing, using, and disposing of computers, servers, and associated subsystems (such as monitors, printers, storage devices, and networking and communication systems) with minimal or no impact on the environment. Green computing strives for economic practicality and improved system performance while satisfying social and ethical responsibilities. Green computing includes the dimensions of environmental sustainability, energy efficiency economics, and total cost of ownership (which includes the cost of disposals and recycling)."[1]

Green computing can be made more sustainable in several ways including:

Each of these examples can save power. More efficient coding means computers use less power and need less powerful hardware. 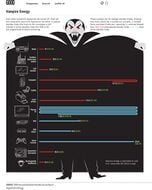 The maker of the low cost Inveneo computer claims to use one-sixth as much electricity as a typical personal computer.[1]

One way of doing that with Open Source Software is to use the Linux Terminal Server Project (LTSP) Software.

In their own words "LTSP is an add-on package for Linux that allows you to connect lots of low-powered thin-client terminals to a Linux server. Applications typically run on the server, and accept input and display their output on the thin-client display

More technical details on a LTSP set up

The Queen's Applied Sustainability Research Group and the Webster Group of Queen's University are collaborating on a project to improve the energy efficiency of IT/S.

Other companies use the internet to facilitate direct sale of computers for re use by a second user, for example, http://web.archive.org/web/20191221224654/http://www.sellmylaptopuk.co.uk:80/ and http://www.computer-recycling-and-removals.co.uk/refurbished-used-computers-laptops.htm This results from the rapid turnover of technology development where items are replaced by newer technology before they reach the end of their useful lives.

Page data
Retrieved from "https://www.appropedia.org/w/index.php?title=Green_computing&oldid=636164"
Cookies help us deliver our services. By using our services, you agree to our use of cookies.
Categories:
Maintenance categories:
Comments
Privacy policy · About Appropedia · Disclaimers · Mobile view · Content is available under CC-BY-SA-4.0 unless otherwise noted.
</html