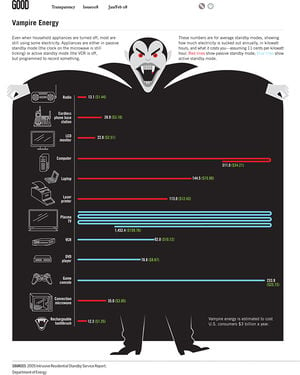 Phantom power is the power consumed by electrical appliances when they are switched off or not in use, but remain plugged in to an electrical socket. It is also known as standby power, the minimum amount of power required by an electrical device while plugged in. Although the phantom power consumption of one individual appliance may be trivial, many appliances within a home or business draw power when not in use, and this power consumption can accumulate. Another reference to phantom power is standby power or vampire power, this can be thought of as a leaky faucet and can account for a total of 10% of the energy costs for a residential home. The following articles provide a comprehensive background on phantom power, its effects, and how it can be mitigated.

A medium-sized business has twenty cubicles, each equipped with an LCD monitor, computer, phone, and printer. These devices use a combined standby power draw of 20.56 watts for an average of 2.63 kWh per week (assuming 8 hour workdays from Monday to Friday). At an average power cost of 7 cents per kWh, this results in a cost of $9.61 per year per cubicle. Replacing all of the current power bars with energy-saving bars (with a cost of approximately $40 each) would result in a payback time of 4.16 years. 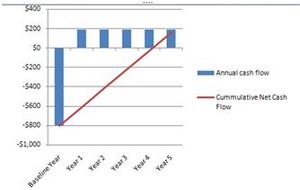 If you are interested in saving money, energy, or carbon through the use of phantom power reducing power bars, please download the following Excel spreadsheets to help with your economic and environmental analysis.

This section provides an annotated bibliography of relevant literature that was used to create and support this analysis.

A brief introduction to phantom power, this article stems from an eco-lifestyle television network called Planet Green. Born in 2008, Planet Green is present both on television and online, and exists to provide information to a broad range of individuals regarding ways to improve the environmental status of our planet. The article covers an introduction to what phantom power is, and why it is necessary to attempt to reduce its consumption.

The purpose of the International Standby Power Data Project is to collect data on standby power from seven different countries in order to facilitate international comparisons and draw trends in standby consumption. By setting standards for the collection of this data, these countries were able to collaborate in order to determine in-depth issues regarding phantom power consumption. The project was initiated as part of the Asia Pacific Partnership on Clean Development and Climate Change, and includes Australia, Canada, China, India, Japan, Republic of Korea, and the United States of America. The information is represented graphically in the above link, demonstrating the distribution of devices within a certain category of appliances.

Information on what standby power is and how to define and cut back on standby power (phantom power) in a consumer household. A list of current residential electricity consumption data and facts and relevant reports and links are provided. This website also provides additional sources on information about standby power. Various programs are listed along with consumer methods to help reduce standby power.

Various configurations are available to be integrated into building infrastructure. Connect via Ethernet for minute-by-minute data collection and scheduling/control of entire circuits. This is a high-cost option with devices starting at approximately $200 per circuit.

A low-cost device (approximately $20) that shuts off automatically after two minutes of inactivity is detected. Can be used on virtually any appliance or device, and occupies only one plug in each outlet. One Standby Plug is required for each device.

With 10 outlets and surge protection, this is a versatile device. Relatively low cost (approx. $40).

Using passive infrared technology, the power bar switches all devices on/off. Coverage is approximately 300 sq.ft. at 120-degree viewing angle, but can be expanded with multiple sensors and expansion pack. Relatively high-cost option (approx. $90), but more desirable for locations where occupants are ambivalent to electricity consumption, because they are not responsible for its cost.

Connecting via USB to a computer, peripheral devices (printer, scanner, speakers, monitors, etc.) can be shut off when the computer is shut down. A very affordable option (approx. $15) to simplify leaving a workspace.

A detailed examination of electronic equipment typically found in office buildings, as commissioned by the Office of Building Equipment, Office of Building Technology State and Community Programs. Outlined is the need for equipment with lower stand-by consumption and methods by which this can be obtained for several devices.

Used in determining cost of labour to transition business from existing power bars to new technology.