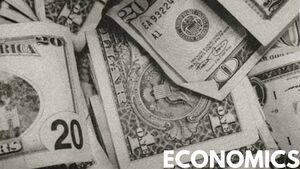 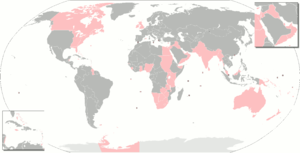 Role of the State[edit | edit source]

Influential countries If somebody thinks about technology, their thoughts are about the future and the extent of potential. But the technology has a dark side. Because of the capitalism of the industrialized countries, the prices fall and the laborer of third worldcountries like China, India, Taiwan are being exploited. If the powerful countries want decrease the prices, the others have no choicethan fire workers, decrease their salary and use cheap materials. 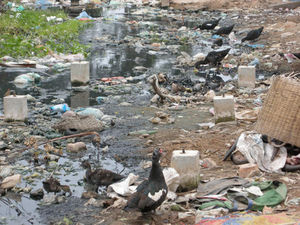 Pollution is tricky because in most cases no one owns the air or water. In fact, it is quite difficult to establish any kind of accountability framework for protecting natural resources.

Things may be different on a smaller scale. For example, if a building deteriorates, the owner of the building is legally responsible for seeing to the repairs; anybody who rents knows that. And anybody who owns is familiar with the costs of ownership. In the case of air and water, it is much more complicated since neither belong to anyone. Ultimately, no one and everyone is responsible. What's more, laying blame is as difficult as determining who will pay for the damages.

No one owns the air and water

There are, of course, situations in which companies actually own land, or are granted the right to exploit it. Paper companies, for example, have long owned forests to transform them into newsprint and tissue. However, this kind of possession is for the most part avoided, as the owners can be easily held liable should contamination occur. As a result, governments and other concerned trustees are increasingly involved on some level of responsibility. A comparison can be made with companies which operate ski resorts. When owning mountains, companies pay exceptionally high insurance premiums in order to protect themselves from legal recourse of injured skiers.

Governments thus have as much incentive to remain strongly involved with environmental issues with respect to accountability and transparency as they do in light of the free market's incapacity to fix the pollution problem alone.

Born of social and environmental concerns, notably through opposition to environmental injustice, sustainable development is the idea of reaching the best possible compromise between economic growth and social evolution, while respecting the natural environment. This compromise only proves to be possible by taking into account a fundamental temporal element: that development must be undertaken to secure generational solidarity. Three underlying principles are said to lie at the core of sustainability: equity, viability and liveability.

While sustainability ties together concern for the carrying capacity of natural systems, it is equally concerned with the social challenges facing humanity as well as the economic vitality of our markets. As early as the 1970s sustainability was employed to describe an economy in equilibrium with basic ecological support systems. In other words, economic growth must operate in harmony with our environmental and social well-being. Today, sustainability is a paradigm garnering popular support as well as a powerful tool for development in various forms.

In the shadows cast by the adoption of the Treaty of Maastricht, however, binding regulatory frameworks based on sustainability have raised new questions about the feasibility of sustainable development practices. Charters such as the Kyoto Protocol and others independent of government, such as Leadership in Energy and Environmental Design (LEED), have fallen short of holistic objectives, further contributing to the lack of understanding of sustainability's purpose. Nonetheless, the sheer volume of academic discussion and the pervasiveness in the media and other circles about sustainability indicate that it should be considered in any examination of the environment. 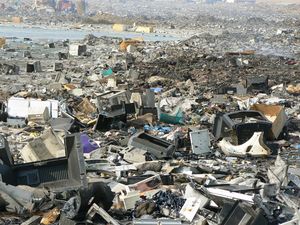 Designed for the dump

E-waste is the fastest growing part of the waste stream. That's because we are buying new electronics at an astonishing rate and tossing out the old ones. New technology is constantly emerging making that old working gadget no longer desirable. Plus some electronic products simply don't last as long as they should, and they are cheaper to replace than to fix. Plus new designs for thinner, smaller items (like smart phones, tablets, and ultrabooks) are making it really hard for people to fix and prolong the use of these devices.

Most Recyclers Don't Recycle, They Export

And what about the 25% that is supposedly recycled? Most recycling firms take the low road, exporting instead of recycling. A large amount of e-waste that is collected for recycling is shipped overseas for dismantling under horrific conditions, poisoning the people, land, air, and water in China, other Asian nations and to Ghana and Nigeria in western Africa.

Adverse air quality can kill many organisms including humans. Ozone pollution can cause respiratory disease, cardiovascular disease, throat inflammation, chest pain, and congestion. Water pollution causes approximately 14,000 deaths per day, mostly due to contamination of drinking water by untreated sewage in developing countries. An estimated 500 million Indians have no access to a proper toilet,[30][31] Over ten million people in India fell ill with waterborne illnesses in 2013, and 1,535 people died, most of them children.[32] Nearly 500 million Chinese lack access to safe drinking water.[33] A 2010 analysis estimated that 1.2 million people died prematurely each year in China because of air pollution.[34] The WHO estimated in 2007 that air pollution causes half a million deaths per year in India.[35] Studies have estimated that the number of people killed annually in the United States could be over 50,000

Oil spills can cause skin irritations and rashes. Noise pollution induces hearing loss, high blood pressure, stress, and sleep disturbance. Mercury has been linked to developmental deficits in children and neurologic symptoms. Older people are majorly exposed to diseases induced by air pollution. Those with heart or lung disorders are at additional risk. Children and infants are also at serious risk. Lead and other heavy metals have been shown to cause neurological problems. Chemical and radioactive substances can cause cancer and as well as birth defects.

Pollution has been found to be present widely in the environment. There are a number of effects of this: Biomagnification describes situations where toxins (such as heavy metals) may pass through trophic levels, becoming exponentially more concentrated in the process. Carbon dioxide emissions cause ocean acidification, the ongoing decrease in the pH of the Earth's oceans as CO2 becomes dissolved. The emission of greenhouse gases leads to global warming which affects ecosystems in many ways. Invasive species can out compete native species and reduce biodiversity. Invasive plants can contribute debris and biomolecules (allelopathy) that can alter soil and chemical compositions of an environment, often reducing native species competitiveness. Nitrogen oxides are removed from the air by rain and fertilise land which can change the species composition of ecosystems. Smog and haze can reduce the amount of sunlight received by plants to carry out photosynthesis and leads to the production of tropospheric ozone which damages plants. Soil can become infertile and unsuitable for plants. This will affect other organisms in the food web. Sulfur dioxide and nitrogen oxides can cause acid rain which lowers the pH value of soil.(Wikipedia)