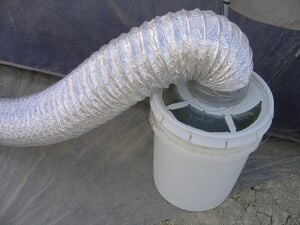 When I'm at Burning Man, I typically stay up until after sunrise. Then, knowing that I'll be doing the same all week, I want to get a good sleep. During the day, sleeping in a tent is like sleeping in a sauna, even with a shade structure. This little solar swamp cooler chills the space enough for me to get a good rest.

We all know water boils (evaporates very quickly) when we heat it up enough. Well there's a direct correlation between how much energy is added to water and its rate of evaporation. Looking at it another way, if water evaporates, it must have gotten the energy to do so from somewhere. When we blow hot, dry air over water, the water evaporates and takes the heat energy from the air to do so. As a result, the air gets cooler. And, the air gets more humid, which at Burning Man gives a nice break from all the dry dustiness. 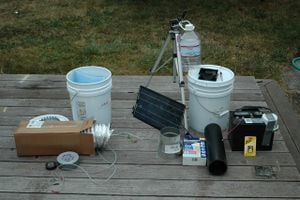 Most of my supplies.

My intention for the air intake bucket was to minimize playa dust from entering the cooler bucket. Minimizing dust keeps the system cleaner, which helps efficiency and reduces maintenance. There are two technical reasons I designed a large surface area for air filtering: Given a particular rate of air being sucked in through the system, a large filter will experience less of an air flow per unit area than a small filter (less vacuum effect), allowing more dust to settle at the bottom of the bucket rather than being sucked into the filter; Also, a larger surface area will be less likely to clog. There are much more important things to do on the playa then clean filters.

The Evaporation Filter is manufactured to evenly distribute water throughout it's structure by a wicking action. The structure of the filter has many passages to allow air to flow through it easily. When hot, dry air flows past the wet filter, it evaporates the water and the air cools.

The fan pulls air from the hot, dry outside through the dust filter, then pushes the cleaned air through the evaporation filter into you living space. The air cools in the process. As the water evaporates from the filter, the filter wicks more water from the pool at the bottom of the bucket. 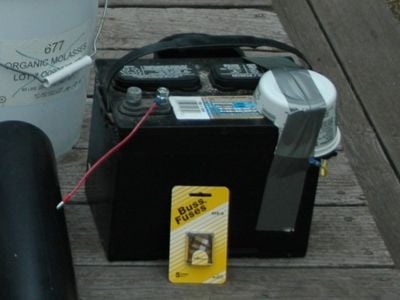 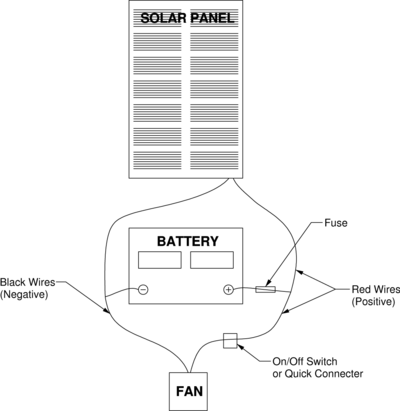 Since this is an evaporative cooler, it uses up water. With this system, I used about 3/4" of a gallon of water per day. The cooling bucket is designed to work best with about a ½" to 1" of water pooled at the bottom. That amount of water completely evaporates in about 45-minutes when the system is on. Wanting low maintenance, I was only willing to refill the water once a day so I devised a siphoning system to keep the water at the required level without tending to it. 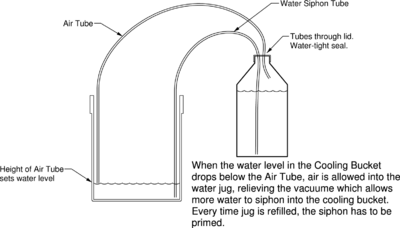 Improvements I would make next time[edit | edit source]

Page data
Retrieved from "https://www.appropedia.org/w/index.php?title=Burning_Man_Evaporative_Cooler&oldid=668476"
Cookies help us deliver our services. By using our services, you agree to our use of cookies.
Categories:
About Appropedia · Policies · Contact · Content is available under CC-BY-SA-4.0 unless otherwise noted.