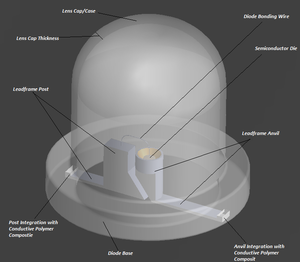 Our idea is to create a self illuminating LED that is powered by ultravoilet and infrared light. The casing is the power source absorbing infrared and UV light, while remaining transparent to visible light.

Fixed pin sights are the most common and most popular type of sight SOURCE. Usually comprised of 3 to 5 individual "pins." Each pin can be set to represent various distances with the top tin reprenenting the closest distance, and lower pins representing consecutive longer distances. Once the pins are set the the users desired distances the pins remain fixed.

This type of sight is used mostly by treestand hunters. This is because the design helps to compensate for elevation on downhill shots. When shooting downhill the arrow get a little help from gravity decreasing the amount of drop the the arrow experiences over a distance. The sight has a single pin the is mounted on a pendulum swing, so as the bow is tipped forward the pin swings out and up automatically to compensate for the downward angle of the shot Bowsight Selection Guide

This type of sight does not have fixed pins, instead it has multiple preset pins. One of the preset pions is moveable, and can be adjusted before each shot. "The moveable pin sight has a system of brackets, levers, or worm gears that smoothly slide the entire sight housing up and down, so the pin can be adjusted for any distance in only a few seconds. At the rear of the sight bracket, a small adjustable pointer indicated the yardage along a draduated scales of a series of handmade marks on white tape. Each mark represents a known yardage." Bowsight Selection Guide

This type of sight is also called a "Target Sight" and are primarily used in archery competitions. This type of sight is the most accurate site available on the market. This sight however still uses a pin that is mounded on a complete system of windage and elevation click-adjustments. Bowsight Selection Guide

A fiber optic sight is similar to a fixed pin sight, the only difference is that fiber optic technology is used to carry light that gets trapped in the fiber optic to a pin that allows the light to escape. This escape point is the tip of the pin on the sight and is used to illuminate the pin in low lighting conditions. Bowsight Selection Guide

Uses a battery that powers a secondary light source that is then used to illuminate the pins that are diodes or small lighting filaments. One downsite to this type of pin is that the sight housing must be larger and heavier to accommodate the battery Bowsight Selection Guide

Radioactive pins incorporate a small amount of radioactive tritium or phosphorescent powder to illuminate the sight. Tritium can glow softly for up to 10 years without needing a power source. Bowsight Selection Guide 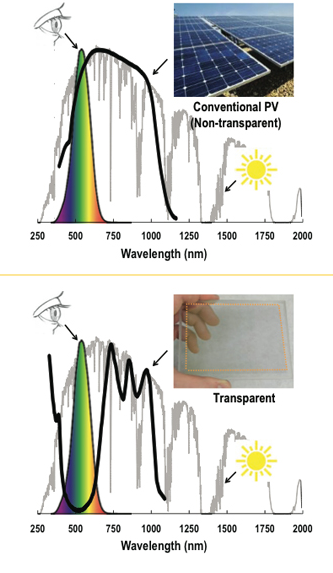 The team has chosen to use a transparent polymer solar cell (PSC) as the material. The device will consist of silver nanowires suspended in a polymer as the anode, an NIR active polymer layer as the semiconductor material and indium tin oxide also suspended in a polymer as the cathode. The photoactive layer transparent to the human eye. Additionally it will allow visible light from the LED the case is powering to escape. The material used as the active layer will exhibit properties as shown in: [Transparent Solar Cells (4)]. Light will be absorbed prior to and after the visible spectrum, but not within. This is the property that makes the material transparent.

The initial reason we chose to do the light emitting diode. 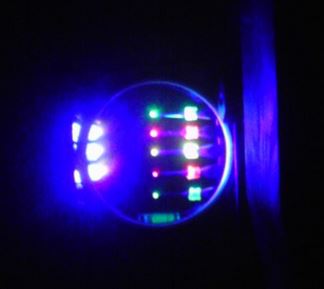 Note that there is no visibility beyond the scope of the light because the eye focuses on the light rather than beyond the pin.

The end product we hope to achieve.

The layering of our semiconductor. 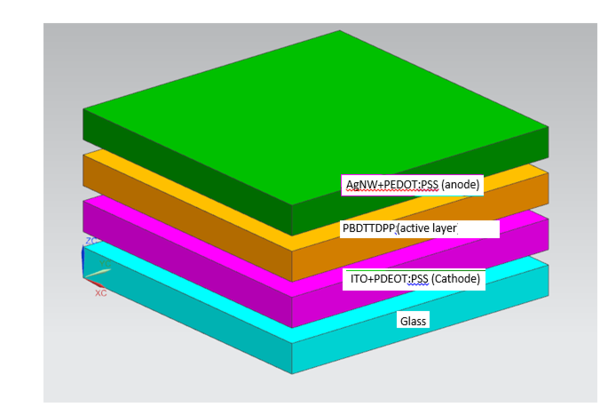 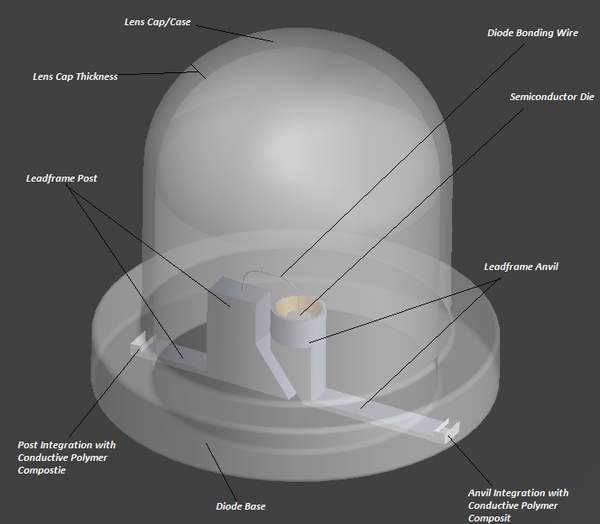 User created diagram of the Diode-Case integration that we hope to achieve. 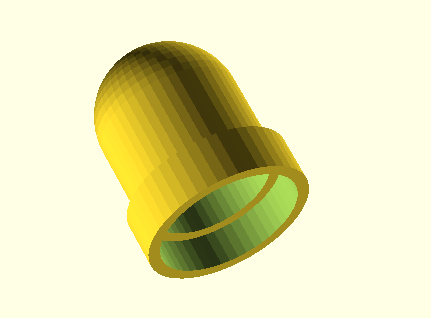 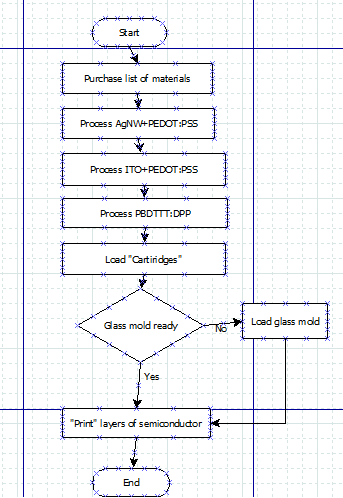 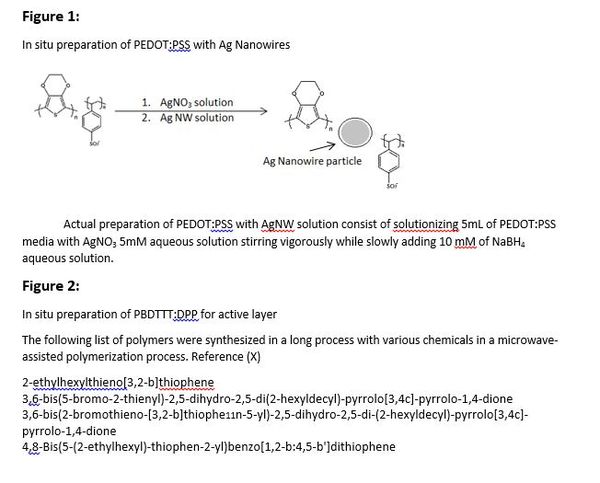 The following procedure lays out the suggested 3D printing method of creating these transparent PSC lens covers, or "sticky diodes". The first obstacle is that the PSC needs a glass substrate, but glass cannot be 3D printed. The printing process would therefore start with small prefabricated glass caps that match the geometry of our lens cover. An inner diameter of 1.5mm would be required. A supplier was not found for these caps specifically, but a supplier such as [United Silica] could most likely supply the caps. The caps would be placed, opening up on the 3D printer and layers of the device would be deposited onto it. The typical "best" resolution of a RepRap 3D printer is about 100 microns [[1]] and thus we will be printing 100 micron layers of our three materials on the prefabricated glass casing. Three syringes will be filled with the three aformentioned materials. A layer of the cathode material will be layed down first followed by the NIR active layer and finally by the anode material. The process will be repeated until the glass cap is filled. Small cavities will be printed into the end of the cap to act as connection points for the diode (see above drawing). The outside ring of material would have an outer diameter of 1.5mm matching the inner diameter of the glass cap. The inside diameter of the cap after printing would be 0.9mm. Since many of our materials are relatively new to the market viscosity information is hard to come by. The unknown viscosity values could potentially cause problems with 3D printing of the materials.

In Situ During Processing of "Sticky Diode" Components[edit | edit source]

It is likely that at this point being able to print a transparent solar cell diode lens cap is still science fiction. A few of the real problems that would likely be encountered are as follows

Even with all of the potential cons of the device, the given materials and process would act as a good starting point for the development of LED lens cases for "sticky diodes". Our team has conducted the initial research that may make the production of this device possible in the near future.

Page data
Retrieved from "https://www.appropedia.org/w/index.php?title=Viability_of_3-D_Printing_Light_Emiting_Diode_Lenz_Cases_out_of_Transparent_Solar_Cells&oldid=602181"
Cookies help us deliver our services. By using our services, you agree to our use of cookies.
Categories:
Maintenance categories:
Comments
Privacy policy · About Appropedia · Disclaimers · Mobile view · Content is available under CC-BY-SA-4.0 unless otherwise noted.
</html