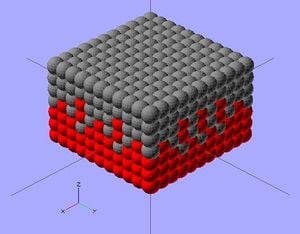 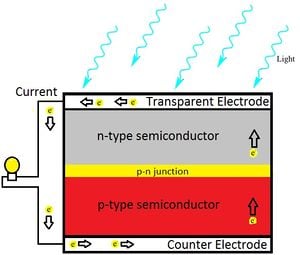 Quantum dots (QD) are nanoparticles comprised of semiconductor materials, which exhibit enhanced electronic properties over bulk materials. These properties are defined by a highly adjustable structure of the quantum dot that yields enormous potential in many applications, including photovoltaic cells.[2] A solar cell (also called a photovoltaic cell) is an electrical device that converts the energy of light directly into electricity by the photovoltaic effect. It is a form of photoelectric cell (in that its electrical characteristics—e.g. current, voltage, or resistance—vary when light is incident upon it) which, when exposed to light, can generate and support an electric current without being attached to any external voltage source.[3] If combined with a quantum dot, a high quantum efficiency (percentage of photons transformed into current) is produced, generating a usable total efficiency.[4]The viability of dissolving these quantum dots into a suitable ink for 3-D printing onto a universal solar cell and its processes are analyzed and discussed. 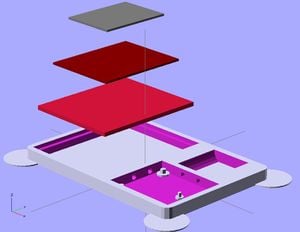 Fig. 2: The layers of the semiconductor portion are raised above a solar cell template: CdSe(crimson), mixed layer(dark red), PbS(Grey)

The scope of this project focuses on photovoltaic cells utilizing CdSe and PbS quantum dots to convert photon energy into current. This particular solar cell will consist of three layers: a p-type (PbS) layer on top; a bulk nano-heterojunction (BNH), or mix of two quantum dots, in the middle; and an n-type (CdSe) layer on the bottom. Each ink will be deposited in layers of .3 mm by the RepRap 3-D printer,[6] with the PbS and BNH consisting of one layer, and the CdSe consisting of two. This method is practical due to the increased n-type doping suggested in BNH devices, as well as the 1:2 p-type to n-type ratio for optimal efficiency.[7] Complete solidification between ink applications may not be necessary, as intermixing between layers may expand the BNH. Carbon nanotubes dispersed throughout the layers will enhance the conductivity of both quantum dots. to work in a low temperature extruder

The optimal matrix for quantum dots and single wall carbon nanotubes (SWNT's) is ABS (Acrylonitrile butadiene styrene), due to its wide array of 3-D printing applications. ABS infused with SWNT exhibits an good electrical conductivity and reduces the normal resistance of 104 ohm-cm considerably. It also exhibits a low printing temperature (about 220° C) without sacrificing solar cell properties, such as composition retention in direct sunlight due to extended exposure. However, ABS has a tendency to crack during application, so a hot plate (of about 110° C) will be supplied to alleviate this issue.[8]

Every necessary semiconductor material is listed below, with the assumption of purchasing every item; therefore, chemicals used for the synthesis of the listed materials are excluded. A brief description stating the positive properties of each included material is also given.

The total cost of all materials was calculated to be $2,505.95, and the quantity of each listed material is one.

Sites have been found that would allow the purchase of QD's, ABS, and SWNT's. It can be seen from NOM corp's website that the CdSe QD's absorb light between 500-600nm, which takes care of most of the visible light spectrum. The Dia graphic describes how QD's could be synthesized at home. Synthesizing the dots would require flasks, a glove box, and a great deal of chemicals.

The semiconductor will be made using 3 separate inks: a PbS ink, a CdSe ink, and a mixed ink. All of these inks should have 1x1016 QD's per cm3 and 100 mg/L of SWNT's.[9][10] Based on these concentrations and a print volume that was determined to be 1.95 cm3, the necessary quantities of each material is given in the 'Amount Needed' column of the bill of materials. This process will require a hopper, a heater, a screw extruder, and a mold. The synthesis process of each ink can be summarized with these steps:

The complete process is displayed in Figure 3 (right). Figure 3 also outlines the basic steps to prepare and 3-D print CdSe and PbS quantum dots. Detailed information of these two semiconductors is shown below in the bill of materials.

There are many methods to process - and therefore purify - the PbS quantum dot. With the method described in the PbS synthesis flowchart, the purification phase occurs during the centrifugation process of the raw PbS quantum dot. Ethanol and n-hexane were injected into the system before the centrifuge began, and this entire process was repeated three times. Following this procedure yields high purity quantum dots, as can be seen due to the lack of impurity lines on the x-ray diffraction spectrum.[12]

Another, quicker method has also been used for CdSe, PbSe, and CdTe quantum dots that have been synthesized using oleic acid and octadecene, among other chemicals. By putting the solution that the QD's have been synthesized in into 1.5 of the equivalent amount of acetone and applying a 500 V DC potential across the solution, the QD's will collect at the anode. These can then be rinsed with more acetone for further purification. This is a very quick way to purify quantum dots and has an almost 100% returning yield of nanoparticles.[13] 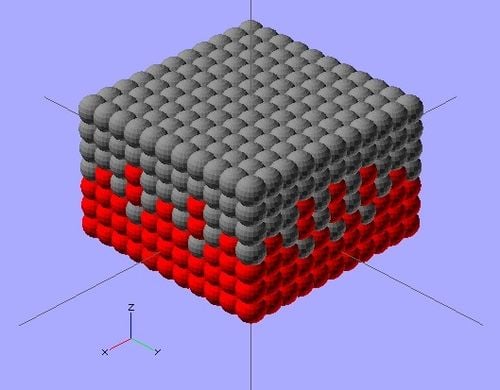 This ink is mostly focused on extending the lifetime of charge carriers in the semiconductor. However, another factor that should be considered in the making of this ink, as in all photovoltaic cells, is the range and efficiency of the absorption of photons. These properties will help increase the efficiency of the ink.

This process takes the trouble of melting and re-solidifying the ABS in a form compatible with the low temperature extruder before 3-D printing the ink. This allows us to perform in-situ analysis on the ink before it is printed.

To test the homogeneity of the quantum dots within the ABS, it would be useful to section off some of the semiconductor ink and take an SEM (scanning electron microscope) image of the section. A coating of chromium or graphite may need to be applied if the ink is not conductive enough.[16] This in-situ analysis would allow the mixing of the QD's to be tested before they are printed out as a solar cell. Also, if a range of QD sizes are observable within the solidified ink, it follows that a range of photon energies will be able to be absorbed.

HRTEM is a powerful tool for analysis of properties of materials on the atomic scale.[18] At present, the highest point resolution realized in phase contrast TEM is around 0.5 ångströms (0.050 nm). Phase contrast TEM enables high resolution imaging.[18] This is ideal for semiconductors and in this case, a quantum dot solar cell because individual atoms of a crystal and its defects can be found. Another very important aspect of this analysis is that size of particles can be measured, as well as their distribution. Other uses of this method are:

When a light is shining on a semiconductor sample, if the energy of the individual photons is greater than the semiconductor band gap, then the photons can be absorbed, transferring their energy to an electron. This is the basis behind optical absorption.[21] The light shined on the sample will be transmitted and then measured by a photodetector. By observing the wavelength at which the sample begins to absorb the light, the bandgap of the sample can be determined. Light incident, reflected, transmitted or scattered by the sample or holder will be absorbed, thus accuracy is important. Intensity of light absorbed can be measured, the fraction of light reflected can be measured, and transmissivity can be measured to yield information about the sample.[21] This information can be complied to gain an idea of how effective a solar cell is. 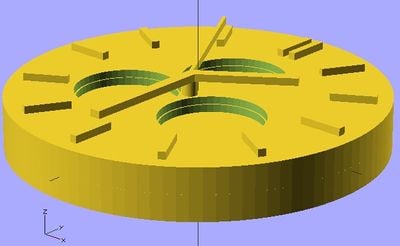 Fig. 8: Compiled and rendered version of the quantum dot layers on the face of a watch

Everyone has already seen the old calculators that use solar cells to help power them. It's quite probable that in the future many smart phones, tablets, and other user devices will run on solar power as well. Our application uses a material that many believe will greatly improve solar cell efficiency, quantum dots, as the solar cell semiconductor for these consumer devices. 3-D printing is the superior way to deposit quantum dots onto these devices. Several other techniques are used to deposit quantum dot semiconductors onto surfaces. These include templated assembly and spin casting. However, 3-D printing has an advantage for printing solar cells over both of these deposition techniques.

The watch design displayed in the OpenScad shows the advantages of 3-D printing a small photovoltaic cell using QD's. It allows for different design choices to be made, such as the holes for separate dials in the watch, while still depositing layers evenly across the surface. It also allows for multiple layers, which a photovoltaic cell requires, to be deposited. Some limits are still in place before user devices will be a reasonable place to use this application. Lead and cadmium are a heavy metals, which are disapproved of in society for consumer products due to their toxicity to people and environments.[24] Also, these cells could improve in efficiency by reducing thickness. However, quantum dot materials and 3-D printing layer thickness are sure to improve in the future, making this a very powerful application.

Work on quantum dots done by the National Renewable Energy Laboratory (NREL) in Boulder, Colorado has allowed quantum dots to generate more than one electron-hole pair for every photon absorbed. This process is known as multiple exciton generation. It is achieved by incorporating the quantum dots "inside" the solar cell as opposed to being on the surface.[25] This provides an advantage over conventional solar cells as there is less waste energy when light is absorbed.

The stl file for the watch face is below:

Fig. 9: The layers of the semiconductor portion CdSe(crimson), mixed layer(dark red), PbS(Grey) are shown as they would be printed 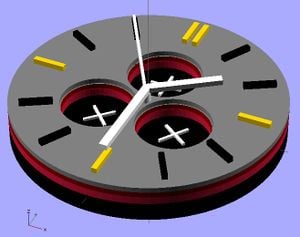 Fig. 10: Colored rendition of the quantum dot semiconductor on the face of a wrist watch 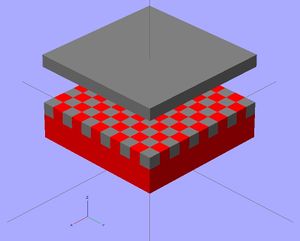 Fig. 11: The PbS(grey) is raised with a conceptual view of the ideal mixed layer being a homogeneous mixture

Page data
Retrieved from "https://www.appropedia.org/w/index.php?title=Viability_of_3-D_Printing_Cadmium_Selenide_and_Lead_Sulfide_Quantum_Dots_in_Solar_Cells&oldid=624158"
Cookies help us deliver our services. By using our services, you agree to our use of cookies.
Categories:
Maintenance categories:
Comments
Privacy policy · About Appropedia · Disclaimers · Mobile view · Content is available under CC-BY-SA-4.0 unless otherwise noted.
</html