Value Of solar literature review/Methods for Analyzing the Benefits and Costs of Distributed Photovoltaic Generation to the U.S. Electric Utility System

Methods for Analyzing the Benefits and Costs of Distributed Photovoltaic Generation to the U.S. Electric Utility System[edit | edit source]

This report examines the methods to estimate the value of DGPV. The report classifies the sources of DGPV benefits and costs into the following categories

[2] Weighted avoided generator—assumes PV displaces a blended mix of typical "marginal" generators, such as a CCGT and combustion turbines (CTs)

2. Scenario-based modeling transmission impacts of DGPV—simulates system operation with and without combinations of DGPV and planned transmission in a PCM

3. Marginal analysis based on curve-fits—estimates capital value and costs based on nonlinear curve-fits; requires results from one of the more complex approaches below

4. Least-cost adaptation for higher PV penetration—compares a fixed set of design options for each feeder and PV scenario

5. Deferred expansion value—estimates value based on the ability of DGPV to reduce net load growth and defer upgrade investments

1. Assume no impact—assumes PV penetration is too small to have a quantifiable impact

The report provides a possible framework to work with to calculate each of the parameters. The figure gives a very precise idea to utilities ,stakeholders and parties involved on how to develop a framework that would quite accurately determine the value of solar. 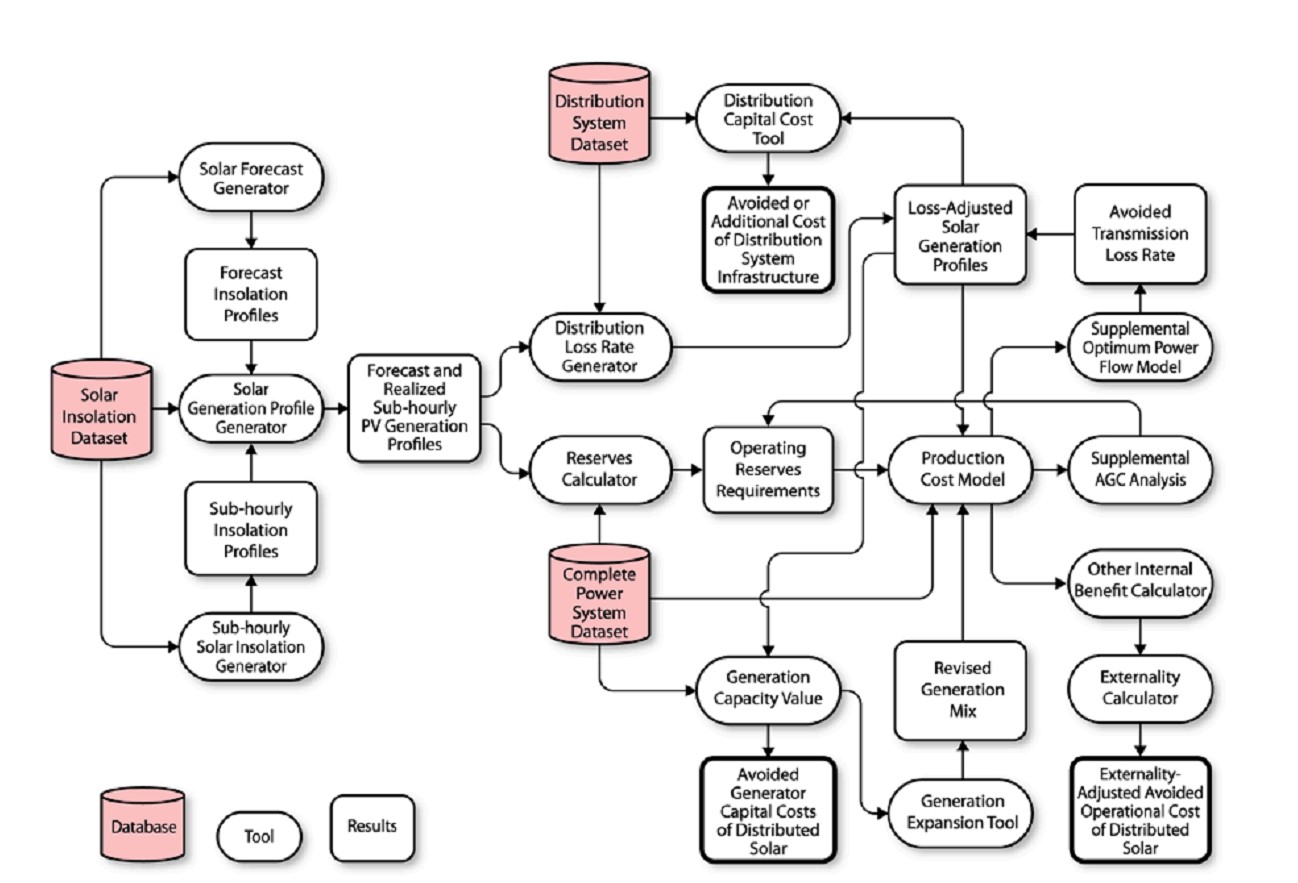 In this report the VOS analysis is done at seven locations, four in Pennsylvania and three in New Jersey. These locations were chosen because they differ in generation mix and this would be reflected in the different environmental costs. Also they differ in the solar radiation levels. Each location was studies for four types of PV configurations which are as follows

This provided a difference in the solar production levels and hence were reflected in the capacity avoided cost and also the energy costs avoided. The detailed calculations as to how the numbers were obtained is also explained in this paper. Some of the key takeaways and conclusions were as follows

[2] Energy Value: This mainly consists of the fuel cost savings and the operation and maintenance cost saving when a PV system is used in place of a conventional power plant (Typically a combined cycle gas turbine )

[3] Strategic Value: This is mainly the security value that a DPV system brings as it is not concentrated at one place. It also includes the Long term value that it brings to the society at large

[4] Market Price reduction: The highest values were obtained in locations where there was a very good match between the Location Marginal Price (LMP) curve and the PV output curve

[5] Environmental Value: This too varied depending on the types of generation the PV was to be replaced with

[6] T & D capacity Value: The values were fairly low as the study only takes into consideration the infrastructure capital that would be deferred for a future time and not immediate investment that would be saved

[7] Fuel Price Hedge: This value essentially determines the future avoided purchases of fuel. So the value greatly depends on the studies utilities or integrated resource planning

[8] Generation capacity Value: As there is a moderate match between the PV output and the load, this value is typically taken between 28-45% of the rated PV output

[10] Solar Penetration Cost: As the solar market penetration increases, more and more infrastructure would be required to synchronize it with the grid. This is actually an estimated expense and hence it is given a negative value

This paper basically talks about the impacts that solar energy production potentially has, positive and negative. The positive effects of solar technology are always more propped up and talked about. There is not much discussion about its negative repercussions on the environment. This paper tries to rectify that missing component in the discussion around solar energy. It discusses the impacts of Solar PV and Solar thermal technologies. Some of the negative impacts of using solar energy on the environment are as follows :

• Routine and accidental release of chemicals

However, all these problems can be overcome by proper site selection, design, innovation and focus on health and safety. The negative impacts of solar technologies are far lesser than that of conventional generation methods.

This paper gives a very detailed study of how solar penetration levels greatly impacts the interconnected grid. As more and more solar generation is being employed, its impact on the existing infrastructure also becomes important. It also examines if it is economically feasible for the western grid to accommodate more levels of solar penetrations. Typical studies are done for 5 % and 25 % solar penetration levels. The paper shows the day daily, seasonal and annual characteristics of Concentrating solar power (CSP) and Photovoltaic Solar (PV) for the areas considered in the study. It is seen that the CSP has a profile which is closer to the load profile. One key finding is that the variable cost goes down as solar penetration reaches 25 %. This is obvious because this is the value of the fuel that is being displaced. However, the operational cost reductions tend to go up as the solar penetration levels increases. This is due to the fact that additional solar power means additional capital investment. The generation being fixed we are just adding an extra source into the system, which ultimately is being added to the cost of the solar energy.

Effect of Penetration on Capacity Value

The capacity value of solar decreases with increased penetration. This is because when an adequate system is fed with more power from a similar source, it gives diminishing returns

• A more thorough unit commitment and economic dispatch of the generators

• Increase the flexibility of the existing generators

Borenstein S. Electricity Rate Structures and the Economics of Solar PV: Could Mandatory Time-of-Use Rates Undermine California’s Solar Photovoltaic Subsidies?. Center for the Study of Energy Markets. 2007 Sep 17. This paper evaluates the validity of the claim that Time Of Use (TOU) tariff caused the orders for solar installations by 78 % as published in the Los Angeles Times in May 2007.

In January 2007, there was a requirement for solar customers to switch to the TOU tariff from the fixed rate tariff. The paper does a thorough study of customers from two of the biggest utilities in California, Pacific Gas and Electric (PG&E) and Sothern California Edison (SCE). The paper does a calculation of the bills the customers would get. It initially calculated the bill under the fixed tariff mechanism and then with the TOU mechanism. Then the bill is calculated taking into consideration a 2 KW solar generation. The author makes various assumptions in these calculations. One critical aspect was that the TOU scheme was not the same in the two utilities. TOU is a mechanism where the price of electricity varies according to the demand and the time of the day. The fixed rate tariff is a tiered tariff mechanism where customers under a particular total consumption will pay a fixed amount as their bill.

The paper concludes that the claims by Los Angeles Times are unsubstantiated and there could be a variety of different economic and social factors as well as comparing of wrong sets of data sets that may have caused them to come up with such a report.

Negash AI, Kirschen DS. Combined optimal retail rate restructuring and value of solar tariff. InPower & Energy Society General Meeting, 2015 IEEE 2015 Jul 26 (pp. 1-5). IEEE. This paper proposes a new approach to value solar power. It discusses about the problems with net metering as the number of solar customers are increasing. It also describes the Value of Solar approach and the potential downsides it has.

The author proposes a new optimized retail rate called the three part retail rate. This attempts to recover variable costs and fixed costs of generation. Here energy cost is considered variable and customer costs is fixed. Also and additional variable charge is assumed for the demand.

It is proposed that the value of solar be linked to the proportion of each of the utilities cost components. Each of these cost components would be weighted by a factor that represents the efficacy of the distributed solar to reduce those costs. An optional external component rate ‘v’ could be added to the weighted retail rate.

A case study was done on a medium sized utility using the proposed approach and the results were found to be quite efficient and accurate. The increasing penetration of solar energy will force stated into making policies which are more fair and accurate. The techniques employed in this paper may be a way to go.

This paper reviews the economics of solar power acting as a source in the interconnected grid.

The costs of solar power have declined very steeply in the past decade. There is a lot of discussion regarding how the economic value of solar should be calculated.

The grid parity technique, comparing generation costs to the retail price, is an often used yet flawed metric for economic assessment, as it ignores grid fees, levies, and taxes.

It also fails to account for the fact that electricity is more valuable at some points in time and at some locations than that at others.

A better yardstick than the retail price is solar power’s ‘market value’.

The paper does a detailed study on how such a market value of solar can be obtained.

Solar PV pricing has become a highly debated topic recently because of the growing number of Distributed Solar PV customers. The net metering scheme has not been accepted as fair by some utilities and so all stakeholder in DPV system are looking for alternatives. The Value of Solar (VOS) method is gaining popularity and extensive studies are being done in this regard. In VOS the cost attributed to solar is a combination of various avoided cost if PV is used instead of a conventional power plant.

The VOS is evaluated based on the following costs

This includes avoided energy due to fuel, operation and maintenance and heat. It also includes the avoided system losses due to the reduced generation capacity and emissions.

This includes the generation avoided and hence the avoided infrastructure upgrades needed.

The DPV capacity is determined through its Effective Load Carrying Capacity (ELCC) , that is the demand that a DPV can cater to when operating at full capacity.

This value is positive when the introduction of DPV reduces the financial risk or overall market price. There is a fuel uncertainty value, which is the future uncertainty in fuel cost called the fuel price hedge. There is reduced demand because of lesser dependence on central generation.

There is lesser congestion in transmission and distribution. Only some area is affected when there is an outage of a PV plant. Back service can be kept available during outages.

This value is positive when it results in reduction of environmental or health impacts. It also includes a Renewable Portfolio Standard Cost, which is the cost saved through not using some other renewable source.

It results in increase in employment opportunities and accelerates economic development. There is a broad consensus as far as the energy cost avoided is concerned among the stakeholders. There is also some agreement on the capacity value of DPV. The key differences are in evaluating the values of security risk, financial risk, environment, society and grid support.

Why does VOS evaluations differ?

This is predominantly due to the fact that every utility would adopt a different approach to determine each of the components. For example, some may include capacity value in energy price and some may not.

This report hence gives us a framework on how each component of the VOS can be calculated.

As renewable technologies mature, recognizing and evaluating their economic value will become increasingly important for justifying their expanded use. This paper reviews a recent sample of U.S. load-serving entity (LSE) planning studies and procurement processes to identify how current practices reflect the drivers of solar’s economic value.