We are a group of four Environmental Science Students who constructed a shingled yurt roof by reusing old cans that would have otherwise been thrown away or recycled. This project was done for our client Campus Center for Appropriate Technology (CCAT) as part of our Engineering 305 class. Our goals in creating this roof were to rescue resources from the waste stream and to create a functional roof to meet CCAT's specifications. 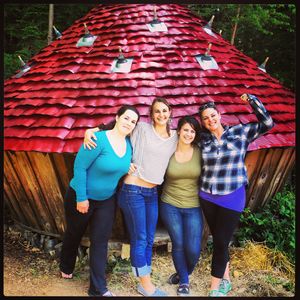 CCAT is the Campus Center for Appropriate Technology at Humboldt State University, in Arcata, CA. CCAT built its yurt to provide a demonstration of a sustainable housing structure. Yurts were originally built by nomadic peoples, and traditionally constructed to be mobile; this is not true of the CCAT yurt. The CCAT yurt was built to be a permanent structure on campus and was originally built with redwood shingles as its roofing material. When CCAT changed locations in 2004 this roof was replaced with a "weather proof" canvas roof. Unfortunately, in Humboldt County canvas rooftops often don't hold up to the elements. When this project came to us the CCAT yurt had a dangerous, black mold infested canvas roof. Our goal was to replace it with a water resistant, structurally sound, recycled roof. Recycled materials are a great product for roofing because many materials that are thrown "away" still have the capability to be used as something functional.

The objective of this project is to creatively utilize recycled materials to produce a safe, durable, and aesthetically pleasing yurt roof. We want to satisfy CCAT's vision for the yurt while focusing on creative reuse in order to both educate visitors and restore the structure to a functional state.

The following criteria will be used to determine which roofing options will be best suited for this project. The scale is from one (least important) to ten (most important).

This is a review of some of the available literature on lighting, roofing material, and health pertinent to the yurt re-roofing project at CCAT. The CCAT yurt is a freestanding structure with minimal wiring or electricity. In the past, light was emitted into the building via the white canvas roof. Since that roof was covered in black mold it was very dark and unhealthy to be inside. Because the yurt relies on the roof for light integrating a mold-resistant roof and natural lighting will be essential.

Aluminum cans are light weight, highly reflective, non-toxic, non-pyrophoric, and are easily fabricated. Aluminum also has a high resistance to corrosion due to the invisible oxide skin that forms when it is exposed to the atmosphere. [1]

In order for the roof to remain water resistant we used three products: recycled aluminum industrial food cans, organic roofing felt, and Rust-Oleum. Although the latter two may not have been the most environmentally friendly, by utilizing the recycled industrial food cans we have minimized the carbon footprint associated with common roofing practices. Below please find the net emissions associated with Asphalt shingles:

Arcata, Ca is an area which on average has a less than 50% chance of experiencing a sunny day.[3] This means that a passive solar daylight system must be designed with this in mind. According to Helmut Köster in his book on daylight architecture, it is possible to capture enough light from the sun if the skylights and windows are placed appropriately.[4] Visual appeal is also important, both on the interior and exterior of the yurt.

There are several ways to create day lighting that maximize the availability of the sun's light. Solar tubes are a very popular method of natural lighting, and can provide very strong focused light through refraction and reflection of the light via mirrors and lenses inside a tube[5]. This same (though less dramatic) effect can be created through the use of old plastic water bottles filled with water which is able to refract the sunlight as well[6][7]. Skylights do not have the same capacity to intensify the sun and capture as much of it, and rely more strongly on clear skies and proper placement, this makes them a less desirable option for the yurt project[8].

If the plastic bottle solar tubes were to be used it would be an added benefit to enhance their visual appeal in the interior of the yurt. Susan Wasinger outlines in her eco-craft book several lamp-shade type projects highlighting creative reuse which would be appropriate, assuming the bottle-bulbs provide enough light.[9]

Black mold, stachybotrys chartarum, is one of over 100,000 types of fungi that grow on organic materials and commonly found in homes. All types of mold produce spores that travel through the air until they collect on a damp surface and reproduce. [10] Although mold is predominant in our environment, there can be major health problems associated with inhaling large amounts of spores when indoors. There are three processes in which mold affects human health: Allergy, infection, and toxicity. [11] Black Mold produces a harmful toxin known as mycotoxins that can lead to death. [12]

How to Build a Yurt Roof out of Recycled Tin Cans:

We wanted there to be very little need for maintenance of the yurt roof. Every seven years new water will need to be put into the bottles in the roof. The bottles slip out of the top of the flashings. If a shingle breaks off, read above process on how to construct a new one and there is paint left in the CCAT shed. Use a staple gun to attach to the roof.

During the first steps of our project our potential roof materials included racing slicks and aluminum cans in addition to tin cans. The racing slicks were very time consuming to cut and could potentially leach with the rainwater. The roof needed to be compatible for a rainwater catchment system, therefore runoff from the roof could not be potentially contaminated. After calculating the surface area of the roof, aluminum cans were determined to be too time consuming. The prototype we built, with the first 2 tin cans we collected, were cut in half and screwed into a piece of plywood. This was or first positive result so we stuck with it and began collecting size 10 cans. We figured we were going to need a lot of them and noted it would be more efficient to cut each can once.

In conclusion, the project was a success. The lights turned out to be very effective, while the shingles worked well for our purpose. The shingles were time consuming as well as injury causing so much care should be taken if choosing this method for future projects. Yurt roofs are typically made of canvas. Because of this, cutting and installing the plywood panels was especially tedious since all 46 panels were different dimensions. The roof is also at such a steep angle that it was quite a task to secure the roofing material to the middle and top of the roof in a safe manner. This was done with at least three people for safety reasons.

The number one lesson we can take away from the project is open communication, not only between group members but between the group and the client. Although we had asked about the client's hopes and wishes for the project, no specific ideas were suggested or required. The client had asked for more light and an appropriate roof material. Later when we were implementing our project we learned that the client hoped we had acquired redwood shingles, which it was too late for. In addition, because our client was CCAT our materials were paid for by the CCAT budget, however the initial cost of the wood was $450 and in order to pay for the wood we needed the go ahead from Associated Students (Instructionally Related Activities). This entire process took almost four weeks before we could pick up the wood and begin construction. In this case we should have begun this process earlier.

The future of the Yurt roof is to observe how well it withstands the Arcata weather and if the materials begin to wear, and how fast. The liter of lights must be observed as well to assess how often they should be remove and cleaned for brighter lighting within the yurt. The shingles were attached to the roof using staples, and were only attached at the top of the shingles to allow a consistent flow of runoff. It will interesting to see if the shingles do indeed allow a natural consistent runoff over the entire surface of the Yurt roof.

We are a group of four female Environmental Science (Energy and Climate) Majors studying at Humboldt State University. The SaLiRaJa Yurt Roof Project was a project we took on during our 2013 Spring Semester Appropriate Technology Course.

It has been about five months and the yurt roof still looks great! The roof with-held some rain and wind during the summer and fall months. There is no rusting or leaking that can be seen. We will have another update after the winter months when we will know how it holds up in "severe weather." (As severe as it gets in Humboldt County.) The shareholders at CCAT seem happy with the project, and they are currently using the yurt to dry their grains in. There was a man squatting in the yurt for a couple days during the summer. The main problem is that the yurt has this wonderful new roof and is ready for some good use, but isn't being utilized to its fullest. (I think Lonny should hold another class in there!) Below are some updated pictures of the CCAT yurt roof.

The Yurt has excellent aesthetics and appears solid and still standing. The roof has a few areas of rust on it, but for the environment it is in it is a very small amount of rust. The roof could be refurnished the rust deterrent used has begun to where off, when talking with the employees of CCAT, it was mentioned that they were planning on going over the roof with the rust deterrent in the near future if time permitted. The bottle lighting system is working wonderfully there is variation in the levels of the liquid, but none of the bottles appeared to be wanting of a refill. The small portion of bleach added to the bottles works well to keep the algae and mold away as none was visible while looking at them. There are no noticeable leaks in the roof at this time. The solar lights in the yurt are working very nicely and light up the room well. The battery was replaced earlier this year, in July. The replacement was a used battery, but it is working well it just needs to be maintained occasionally. The inverter in the yurt is out completely and needs to be repaired or replaced. The lights run on direct currents and the inverter is used to convert the direct currents to an alternating current, so it does not affect the lighting system, but it would be good to be repaired. A few of the employees at CCAT mentioned that it would be nicer to have a deeper cycled battery for the solar system in place. Overall, the yurt is still standing, the roof has no major leaks and the solar system is hooked up and the lighting works. The roof could be re-coated with some rust resistant overlay, and the invertor needs to be repaired or replaced.