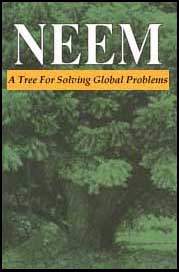 Since antiquity neem has been renowned for healing. The earliest Sanskrit medical writings refer to the benefits of its fruits, seeds, oil, leaves, roots, and bark.(The tree's Sanskrit name was "arishtha," meaning "reliever of sickness.") Each of these has long been used in the Indian Ayurveda and Unani systems of medicine. Thus, over thousands of years, millions of Asians have used neem medicinally. In addition, in places where the tree has been introduced in recent times, such as tropical America and Africa, it has also established a reputation as a useful cure for various ailments.

Today, the best-established and most widely recognized uses are based on its merits as a general antiseptic. Neem preparations are reportedly efficacious against a variety of skin diseases, septic sores, and infected burns. The leaves. applied in the form of poultices or decoctions, are also recommended for boils, ulcers, and eczema. The oil is used for skin diseases such as scrofula, indolent ulcers, and ringworm.

Cures for many more ailments have been claimed but have not been independently confirmed by trials under controlled conditions. Nonetheless, there are intriguing indications that neem might in future be used much more widely. These promising, but unproved, applications include anti-inflammatory, hypotensive, and anti-ulcer treatments.

A summary of some recent results in medical and veterinary studies follows.

Neem has proved effective against certain fungi that infect the human body. Such fungi are an increasing problem and have been difficult to control by synthetic fungicides. For example, in one laboratory study, neem preparations showed toxicity to cultures of 14 common fungi, including members of the following genera:

In trials neem oil has suppressed several species of pathogenic bacteria, including:

However, neem has many limitations as an antibiotic. In the latter test, neem showed no antibacterial activity against certain strains of the above bacteria, and none against Citrobacter, Escherichia coli, Enterobacter, Klebsiella pneumoniae, Proteus mirabilis, Proteus morgasi, Pseudomonas aeruginosa, Pseudomonas E01, and Streptococcus faecalis.

In India, there is much interesting, but anecdotal, information attributing antiviral activity to neem. Its efficacy - particularly against pox viruses - is strongly believed, even among those of advanced medical training. Smallpox, chicken pox, and warts have traditionally been treated with a paste of neem leaves - usually rubbed directly onto the infected skin.

Experiments with smallpox, chicken pox, and fowl pox suggest that there may be a true biological basis for this practice. Crude neem extracts absorbed the viruses, effectively preventing them from entering uninfected cells.(Rao et al., 1969; Rae and Sethi, 1972.) Unfortunately, no antiviral effects were seen once the infection was established within the cell. Thus neem was effective prevention, but not cure.

Recent pharmacological studies have supported the belief that neem leaves possess some antiviral activity. So far these are only preliminary and unconfirmed results, but they are intriguing, nonetheless. In the United States, aqueous neem-leaf extracts have shown low to moderate inhibition of the viral DNA polymerase of hepatitis B virus.(Information from D.W. Unander) In Germany, an ethanolic neem-kernel extract has proved effective against herpes virus. And in horticultural studies, crude extracts also seemed to effectively bind certain plant viruses, and so limit infection (see Chapter 6).

Should these early results prove to be soundly based, an array of extremely virulent and difficult diseases of people - not to mention of wildlife and livestock - might be treated.

Given all of neem's insecticidal properties, it is perhaps not unexpected that it is a common folk remedy against maggots and head lice. In Haiti, for instance, crushed leaves are rubbed into open wounds that have become maggot infested. And in India and Bangladesh, villagers apply neem oil to the hair to kill head lice, reportedly with great success.

As noted earlier, both in India and Africa millions of people use twigs as "toothbrushes" every day. For many the twig is neem. Dentists have endorsed this ancient practice, finding it effective in preventing periodontal disease. It is unclear whether the benefit is due to regular gum massage, to preventing plaque buildup, to neem's inherent antiseptic action, or to all three.

As also noted earlier, a German company uses neem (actually, extracts of bark) as the active ingredient in toothpastes and other oral hygiene preparations. It claims that its tests prove need bark to be highly effective at both preventing and healing gum inflammations and periodontal disease.

Extracts of neem reportedly affect the kissing bugs that transmit the much-feared Chagas' disease (see sidebar, page 64). They do not kill the insect; instead they "immunize" it against parasites that live inside it for part of their life cycle. The discovery may point the way to controlling this major health problem in Latin America, although delivering neem materials to these tiny bloodsuckers in rural hovels is perhaps impossible in practice.

The research was done both in Germany and Brazil, and has shown that feeding neem to the bugs not only frees them of parasites, but azadirachtin prevents the young insects from molting and the adults from reproducing.

The researchers conclude that azadirachtin does not simply kill the parasite because they can dose it with azadirachtin and it remains infectious. In any case, they point out that the bug excretes most of the azadirachtin within a few minutes of eating it.

Even with this short exposure, however, azadirachtin somehow disrupts the delicate host-parasite relationship. According to the research leader: "The bug has been affected in such a fundamental way that it is no longer attractive to, or a viable host for, the parasite."

Trypanosomes like these have always been extremely difficult to control. Like the AIDS virus, they constantly "change their coat," so that creating vaccines against them is difficult at best. Whether neem will provide the key to their control is uncertain, but, at the very least, it may be a valuable research tool for understanding the basis of the relationship between the host and the powerful parasite it passes on to millions of people.

Practitioners of the Indian Ayurveda medicine system have been preparing neem in oral doses for malarial patients for centuries. Neem's antimalarial activity was reported in Ayurveda books as far back as 2000 B.C. (by Charaka) and 1500 B.C. (by Sushruta). Even outside India - in Nigeria and Haiti, for example - neem-leaf teas are used to treat malaria.

In the past, researchers were unable to confirm that neem products can affect the malaria parasite Plasmodium falciparum. And it was not for want of trying. Various groups researching antimalarials repeatedly tested neem. The results - in infected mice, ducks, and chickens - were inconsistent and usually negative.

Nonetheless, there is recent evidence that improper extraction methods may explain the earlier failures. Certain extracts of neem leaf and neem seed have now proved effective against the malarial parasite, and the structure of one active component has been determined. (Khalid et al., 1986; Khalid et al., 1989.)

This compound, gedunin, is another limonoid. It is said to be as effective as quinine on malaria-infected cell cultures.

In India, it was recently reported that components of the ethanol extract of neem leaves and seeds were effective against chloroquine-sensitive and chloroquine-resistant strains of the malaria parasite.(Badam et al., 1987.)

Although these are preliminary results, they indicate a potentially valuable line of research. Malaria is creeping back into areas where it had been eliminated earlier this century. It now infects approximately 110 million people annually, causing up to 2 million deaths. Moreover, there is a growing problem of resistance to the conventional treatments.

On the other hand, caution is also needed. As noted earlier, anecdotal evidence from Nigeria suggests that drinking neem-leaf teas over an extended period may lead to liver damage.

Neem may also be a ready source of low-cost analgesic (pain relieving), or antipyretic (fever-reducing) compounds. It is used for these purposes everywhere it is grown. In trials, positive results have been obtained for significant analgesic, antipyretic, and antiinflammatory effects. This may explain its wide use for treating fevers in general. Some of the anti-inflammatory compounds have even been patented. (Terumo Corporation 1983, 1985. Anti-inflammatory polysaccharides from Melia azadirachta. Japan Kokai Tokyo Koho JP 82-05532 and 83-225021.)

Research has shown that neem oil acts as a powerful spermicide. This finding is preliminary and may eventually prove of little consequence, but it may also prove of paramount importance. Perhaps 80 percent of the expected population explosion, which may double the number of people on earth in the next 40 years, will occur in countries where neem can be grown. An inexpensive birth-control method that can be produced in the backyards of even the remotest and poorest villages could be a vital resource.

Indian scientists have demonstrated that neem oil is a potential new contraceptive for women (see sidebar). It kills spermatozoa within 30 seconds and has proved effective both in laboratory trials and in practice - where an intravaginal dose of I ml of neem oil was used. Histopathology failed to reveal any side effects.

As a follow-up to these experiments, the Indian army provided neem oil to 20 soldiers and their families as a birth-control measure. This trial was considered so successful that the colonel in charge of the program was honored by the prime minister. A neem-oil formulation called "Sensal" is now sold in India for contraceptive purposes.

Neem-leaf extracts have also shown promise as male birth-control products because they reduce fertility in a variety of male mammals. Reportedly, there was no impotence or loss of libido(Sadre et al., 1984.)

More details of these tentative but potentially far-reaching discoveries are given both in the sidebar (opposite) and in Appendix B.

Ancient practice and initial testing of neem derivatives against various livestock pests indicated that this is an area of particular promise for the future. Some possibilities are discussed below.

Insects of veterinary importance are obvious targets for neem products. Some examples follow:

The Staphylococcus aureus bacterium, mentioned earlier, also causes mastitis (inflammation of the mammary glands) in cows. Neem's apparent ability to control certain strains of this bacterium may thus be of great economic importance to dairying in the nations where neem grows.

Also, the salmonella bacterium, in addition to affecting people, causes abortion in horses, cattle, and sheep, as well as a variety of infections in poultry and livestock.

Trials in Germany showed that neem also works against intestinal nematodes in animals. (Information from H. Schmutterer. To be effective, the preparations had to have relatively high concentrations of azadirachtin.)

A WORD OF CAUTION

Medicines from plants should, of course, be treated with the same caution as medicines from laboratories. Neem oil seems to be of particular concern. Consuming it, although widely practiced in parts of Asia, is not recommended. Doses as small as 5 ml have killed infants, and animal studies showed acute toxicity at doses as low as 14-24 ml per kg of body weight. It seems possible that this was caused by contaminants rather than by the oil itself. In Germany, toxicological tests using oil obtained from clean neem kernels resulted in no toxicity, even at a concentration of 5,000 mg per kg of body weight in rats. Nonetheless, caution is called for.

The leaves or leaf extracts also should not be consumed by people or fed to animals over a long period. There are anecdotal reports of renal failure in Ghanaians who were drinking leaf teas as a malaria treatment.

None of this should be confused with earlier statements. The compounds and seed-kernel extracts responsible for the insecticidal activity appear to be essentially nontoxic to mammals (see Appendix A).