Impacts of agriculture on climate change 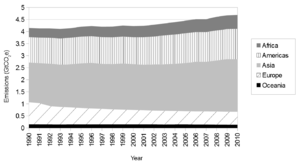 The agricultural sector is a driving force in the gas emissions and land use effects thought to cause climate change. In addition to being a significant user of land and consumer of fossil fuel, agriculture contributes directly to greenhouse gas emissions through practices such as rice production and the raising of livestock;[1] according to the Intergovernmental Panel on Climate Change, the three main causes of the increase in greenhouse gases observed over the past 250 years have been fossil fuels, land use, and agriculture.[2]

Agriculture contributes to greenhouse gas increases through land use in four main ways:

The planet's major changes to land cover since 1750 have resulted from deforestation in temperate regions: when forests and woodlands are cleared to make room for fields and pastures, the albedo of the affected area increases, which can result in either warming or cooling effects, depending on local conditions.[4] Deforestation also affects regional carbon reuptake, which can result in increased concentrations of CO2, the dominant greenhouse gas.[5] Land-clearing methods such as slash and burn compound these effects by burning biomatter, which directly releases greenhouse gases and particulate matter such as soot into the air.

Livestock and livestock-related activities such as deforestation and increasingly fuel-intensive farming practices are responsible for over 18%[6] of human-made greenhouse gas emissions, including:

Livestock activities also contribute disproportionately to land-use effects, since crops such as corn and alfalfa are cultivated in order to feed the animals.

In 2010, enteric fermentation accounted for 43% of the total greenhouse gas emissions from all agricultural activity in the world.[8] The meat from ruminants has a higher carbon equivalent footprint than other meats or vegetarian sources of protein based on a global meta-analysis of lifecycle assessment studies.[9] Methane production by animals, principally ruminants, is estimated 15-20% global production of methane.[10][11]

Worldwide, livestock production occupies 70% of all land used for agriculture, or 30% of the land surface of the Earth.[12] 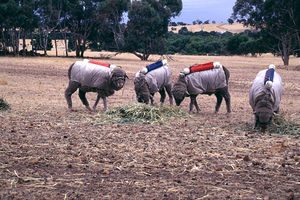 At a global scale, the FAO has recently estimated that livestock (including poultry) accounts for about 14.5 percent of anthropogenic greenhouse gas emissions estimated as 100-year CO2 equivalents.[13] A previous, widely cited FAO report using somewhat more comprehensive analysis had estimated 18 percent. Because this emission percentage includes contributions associated with livestock used for production of draft power, eggs, wool and dairy products, the percentage attributable to meat production alone is significantly lower, as indicated by the report's data. The indirect effects contributing to the percentage include emissions associated with production of feed consumed by livestock and carbon dioxide emission from deforestation in Central and South America, attributed to livestock production. Using a different sectoral assignment of emissions, the IPCC (Intergovernmental Panel on Climate Change) has estimated that agriculture (including not only livestock, but also food crop, biofuel and other production) accounted for about 10 to 12 percent of global anthropogenic greenhouse gas emissions (expressed as 100-year carbon dioxide equivalents) in 2005[14] and in 2010.[15]

In the US, methane emissions associated with ruminant livestock (6.4 Mt in 2013)[16] are estimated to have declined by about 17 percent from 1980 through 2012. Globally, enteric fermentation (mostly in ruminant livestock) accounts for about 27 percent of anthropogenic methane emissions,[17] and methane accounts for about 32 to 40 percent of agriculture's greenhouse gas emissions (estimated as 100-year carbon dioxide equivalents) as tabulated by the IPCC.[15]Methane has a global warming potential recently estimated as 35 times that of an equivalent mass of carbon dioxide.[17]However, despite the magnitude of methane emissions (recently about 330 to 350 Tg per year from all anthropogenic sources), methane's current effect on global warming is quite small. This is because degradation of methane nearly keeps pace with emissions, resulting in relatively little increase in atmospheric methane content (average of 6 Tg per year from 2000 through 2009), whereas atmospheric carbon dioxide content has been increasing greatly (average of nearly 15,000 Tg per year from 2000 through 2009).[17]

In New Zealand, nearly half of [anthropogenic] greenhouse gas emission is associated with agriculture, which plays a major role in the nation's economy, and a large fraction of this is assignable to the livestock industry.[23] Some fraction of this is assignable to meat production: FAO data indicate that meat accounted for about 7 percent of product tonnage from New Zealand's livestock (including poultry) in 2010.[8] Livestock sources (including enteric fermentation and manure) account for about 3.1 percent of US anthropogenic greenhouse gas emissions expressed as carbon dioxide equivalents, according to US EPA figures compiled using UNFCCC methodologies.[24] Not all forms of meat and animal–based foods affect the environment equally. One study estimates that red meats are 150% more greenhouse gas intensive than chicken or fish.[25] According to another research group, the ranking of some food products in relation to greenhouse gas emissions is lamb (#1), beef (#2), cheese (#3), and pork (#4).[26] However, such ranking may not be broadly representative. Among sheep production systems, for example, there are very large differences in both energy use[27] and prolificacy;[28] both factors strongly influence emissions per kg of lamb production.

Page data
Retrieved from "https://www.appropedia.org/w/index.php?title=Impacts_of_agriculture_on_climate_change&oldid=633494"
Cookies help us deliver our services. By using our services, you agree to our use of cookies.
Categories:
About Appropedia · Policies · Contact · Content is available under CC-BY-SA-4.0 unless otherwise noted.