The Intergovernmental Panel on Climate Change, also known as the IPCC, is the United Nations' scientific intergovernmental body created to evaluate climate change science. The IPCC was established in 1988, and was later endorsed by the United Nations General Assembly Resolution 43/53.[1] It is the leading international body for assessing climate change across an array of scientific, socio-economic, environmental and other relevant aspects.[1]

Membership is open to members belong to the World Meteorological Organization (WMO) and the United Nations Environment Programme (UNEP).[1]

To run the IPCC, there is a Secretariat based in Geneva, at the WMO headquarters.[1] As well as the three Working Groups (discussed in the following section), there is a Task Force and a Task Group. The Technical Support Unit (TSU) coordinates and administrates the activities for both the Working Groups and the Task Force. The IPCC is administered under United Nations rules and procedures, which includes abiding by codes of conduct and ethical principles.[1]

Since its establishment, the IPCC has produced reports that support the science for the actions taken pursuant to implementing obligations under the United Nations Framework Convention on Climate Change (UNFCCC).

Scientific evidence is sourced from peer-reviewed scientific literature and, in some cases, relevant material that has not been peer reviewed. However, wherever the material is sourced from, it is subject to intense scrutiny by hundreds of scientists through the Working Groups and by the thousands of scientists who contribute voluntarily to the reports produced.[1] This review is essential to objectivity, currency and completeness of the process of informing Governments and the public about the state of climate change.[1] In addition, the IPCC liaises with Governments.[1] The IPPC "aims to reflect a range of views and expertise"[1].

As noted already, the role of the IPCC includes assessing research undertaken on climate change by thousands of scientists from around the world. The assessment is then synthesised into key assessment reports that are released around every five to seven years, as research, analysis and discussion of the conclusions reached takes years. These reports are worked on by scientists in specific working groups and come out in three volumes based on the work of each working group.

The following summaries are drawn from http://web.archive.org/web/20181102154252/http://www.ipcc.ch/working_groups/working_groups.shtml:

Finding your own way around the IPCC[edit | edit source] 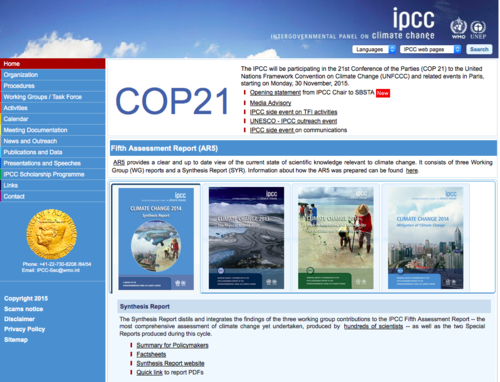 Leaving aside the technical and administrative speak so easily slipped into when discussing the IPCC, its scientific approach and the reports, it is important that the average person knows how to find the IPCC work and feel comfortable with it. Here are some suggestions to help you navigate your way around the IPCC site and works:

Getting answers about the IPCC or its workings[edit | edit source]

Ask questions. If you need to know something, send an email or some snail mail to the Secretariat and they'll work out who can answer your question. Here is the link to their contact details: http://web.archive.org/web/20181102154344/http://www.ipcc.ch/contact/contact.shtml.

More details on the Secretariat can be found here: http://web.archive.org/web/20181103112803/https://www.ipcc.ch/organization/organization_secretariat.shtml.

Research for this article is based on: