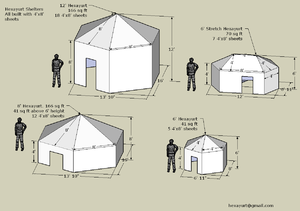 Classic Construction: A Step By Step List of Everything You Need To Do.

These instructions are specifically for building an 8 Foot Hexayurt using the "classic construction" technique. See this list of other hexayurt shapes, sizes, and construction techniques (no, really, go look there first for lots of great ideas and upgrades in hexayurt technology). This page houses some detailed information about supplies that are used in building other sizes/shapes of hexayurt, and other construction modes. This hexayurt information references the hot, dusty environment of the Black Rock Desert and the Burning Man Art festival. In other climates and for long term use, you should look at hexayurt.com for instructions using other materials, like plywood.

Building a Hexayurt is easy. You can get everything you need on one trip to a building supply store and one mail order.

This list is not a substitute for the videos. It's designed to be printed out and carried around, to the playa and to the hardware store, to make sure that in the rush you don't forget something important or do the steps in the wrong order. It is very detailed because I know what the last minute crunch is like.

A key material involved in constructing Hexayurts is tape. Importantly, 6" wide bidirectional filament tape. In English, that's a six inch wide tape with re-enforcing fiberglass strands running in both directions, so that it will not break or tear under almost any imaginable circumstance, including howling playa dust storms. It is amazing and very expensive. Other tapes have been tried-- they aren't great in playa conditions, and those who went off the beaten path regretted it. Some innovations are underway, we'll see what results come back (and we'll take reports of success w/ other tapes in the discussion section. Recently, 3" bidrectional tape has been used to cut costs, and foil tape helps out in a variety of applications. See the tape discussion for more.

You also use the tape calculator spreadsheet to figure out exactly how much you need.

Building Supply Store. You will need.

At home, prepare the panels.

Do read a few hexayurt transport horror stories on the Burning Man discussion boards--because transport would be a terrible way to lose your yurt, injure another car/person, etc. It's recommended to have backup living quarters (even a cheap tent) in the even that your hexayurt sails away during transport or assembly. Remember: this is extreme self-reliance.

Developments have been made in classic Hexayurt construction that have created an alternate method of on-playa hexayurt assembly. There are two Assembly Strategies:
3D/Midair Strategy: historically, roof pieces were assembled in midair, with 3-4 friends to hold them in position, in the shape of the finished hexayurt. Almost all of the videos show this assembly strategy. You will find in the videos that this strategy creates several mishaps that are time and tape consumptive.
2D/Grounded Strategy: You can assemble a hexayurt in 2D, which requires 2 people until you lift the roof onto the walls. This strategy keeps all of the pieces on the ground for the majority of assembly. (Video to come soon. Consider watching the Camp Danger assembly videos as a guide) Also coming soon: PDF guide for 2D/Grounded Assembly

Overview: 3D/Midair assembly, as described above in Pick your Assembly Strategy is the oldest assembly method, and perhaps more inaccurate and cumbersome. Inaccuracies are never fun, but they can be especially painful when working with expensive tape that might be in limited supply. Take at least a quick look at the 2D assembly strategy and see if it sounds reasonable. Whichever strategy you choose, print the assembly instructions before building and print the instructions for cutting down your hexayurt, which are good guidance for cutting your yurt down so that it is much easier to reconstruct next time.

Do the roof cone.

Do the walls. This is the easy bit.

Put the Roof Cone on the Walls[edit | edit source]

This bit is pretty easy too!

Tie it to the Playa[edit | edit source]

These instructions allow you to tape together the roof cone pieces while they are flat on the ground, and will only require 2 people for almost all of the assembly. This is almost as good as making a semi-folding hexayurt, except you are working in desert conditions instead of at home, and there will be bits of exposed tape (it likes to stick to stuff). Finally and barely in time for Burning Man 2011: the 2D Assembly PDF Guide Media:2D_instructionsPDF.pdf. Brought to you en route to the playa from the Donner Pass. It is assumed that you already did the steps of "preparing your panels” at home, meaning you have 6 full size 4’x8’ panels, 12 triangular half panels, and all of these have had their raw edges sealed with tape. Never cut panels at Burning Man, never bring un-sealed panels to Burning Man, they create MOOP (litter).

Start by assembling the roof, it’s less likely to blow away than the walls
1: Lay two triangular roof panels out flat on the ground, aligning their hypotenuses (the longest, diagonal side). This makes a shape like a kite. You probably want the logos on the inside of the yurt, so have their non-logo side facing up. Hiding all commercial logos is a Burning Man tradition, although it’s becoming a lost standard. (*Not all the triangles are the same, so keep picking triangles until you get a pair who will line up this way without their logos showing. If you can’t find two, it’s because you didn’t reverse the direction that you cut your panels during prep. Just an aesthetic problem.)

2: When you tape the hypotenuses together, leave a gap between the panels that is ½ the thickness of your panels (if you used 1” panels, it’s ½ inch. If you used 2”, make a gap that is 1”, etc). If you leave a gap that is ½ the thickness of your panels, by the magic of geometry, your roof will have the perfect angles to fit on your yurt walls. This gap is how you avoided building the roof cone with it suspended in midair by your friends. It will also leave a bit of exposed tape in between the panels—careful not to let it stick to everything. And don't be too perfectionistic about the perfect measurement on your gap-- tape is very forgiving. 3: Do this a total of 6 times: you will have 6 “kites.” You can add something to cover the exposed sticky tape so that it doesn’t stick to everything. A strip of masking tape, ribbon, playa dust, etc will do. Properly made semi-folding hexayurts have hinges that use bi directional filament tape on both sides, because the tape-to-tape connection is very strong and the hinge itself seals the raw material and the sticky tape on both sides of the hinge. You probably don’t have enough tape to do that, so the hinges will be vulnerable and delicate. Just be careful that you don’t rip the tape off the panels. To protect against that, you can use a few 2-4" tape-patches from the opposite side of the hinge--some of the tape will touch the gap-tape, some will contact the panel. It'll help.

4: Tape together the “kites” that you just made. Be careful to line up the “bases” of the triangles as you do this—the sides that will rest on the tops of the walls should sit flat.
If you want to make your hexayurt a pseud-semi-folding hexayurt, tape the kites together with the logo side facing up (meaning, you'll see this tape from inside your yurt--later it will make your roof accordion folding. If you want slightly better waterproofing, tape them together with the non-logo side up (this won’t accordion fold for shipping later). Do this until you run out of panels.

5. You will have some trouble making the final seam because there is nowhere to stand (a common hexayurt assembly problem in all construction modes). Use a few "tape patches" (segments of 6" tape-- about 2-6 inches long) to get the roof cone into it’s final position. Tape patches will make your life much easier and are surprisingly strong. This technique may need some improvement, but one way to tape the halves together and seal out rain is to create 1 long (16') length of tape, held between two people and lifted over the roof with the help of a broom handle. Use the broom handle to land the tape at the tip of the roof cone, try to make it even but don't be too concerned. Then use the bristles of the broom to smooth the tape down to the roof panels. This finishes the final seam and waterproofs the hexayurt roof. If you are using tape-anchors for to stake your hexayurt down, make them now. Read this for a comparison of stake-down options, tape anchor construction is discussed here here Note: hexayurts, once taped together, are large, lightweight, fragile things that will catch the wind like a sail, and blow away like a kite. Be prepared to stake your hexayurt to the ground before you tape the roof onto the walls. Consider driving 3 stakes into the ground and have some rope ready. While the probability of a rogue dust storm during hexayurt construction might seem low, it can happen and has happened. Do not lose your hexayurt this way.

For the Walls: 1: Lay 2 wall panels out flat on the ground. You probably want the logos on the inside of the yurt, so place them with their non-logo sides facing up. 2: For the best dust/waterproofing, tape together all the wall boards from their outside or logo-free side, leaving a gap between the panels that is equal to the thickness of your panels (if you used 1” panels, it’s a 1 inch gap.) Like the roof, the gap is the perfect size gap for the angles that a hexagon takes—just trust it. Alternatively, you can just tape from the interior side of the panels without a gap. This is going to take up quite a bit of space on the ground, so tape together just 2 or 3 panels at once. Luckily there’s a lot of space at Burning man, but if you’re cramped for space, panels are easily transported somewhere more spacious and then brought to your camp for final assembly. Pseudo-semi-folding hexayurt info, for the walls: to keep it simple, you could do as listed above (gap or no gap), and when you cut it down, cut it into 3 wall sections (of 2 panels each, they will fold closed like books.) If you want to make a semi-folding hexayurt, you'll need to alternate what's listed above, taping panels with a gap (taped from the outside, gap is equal to the thickness of the panel) and a tight hinge from the inside (without a gap). 3: Stand the panels up, and complete the walls by circling them up and taping the final seam(s). Now your hexayurt is assembled. Go back to Put the Roof Cone on the Walls to finish assembly.

Cutting your Hexayurt Down and Going Home[edit | edit source]

This is important. Don’t forget during your mind blowing Burning Man Experience!

Page data
Retrieved from "https://www.appropedia.org/w/index.php?title=Hexayurt_project/Hexayurt_playa_checklist&oldid=630825"
Cookies help us deliver our services. By using our services, you agree to our use of cookies.
Categories:
About Appropedia · Policies · Contact · Content is available under CC-BY-SA-4.0 unless otherwise noted.